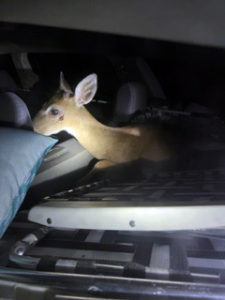 Two Miami men were arrested Sunday after a Key deer was found in their truck following a traffic stop in Marathon.

“We always talk about our law enforcement partners as our unique community relies on those partnerships,” said Sheriff Rick Ramsay. “Thanks to the great work by our Deputies and the quick actions of FWC, the Key deer is alive, and hopefully it will recover and be released.”

The Sheriff’s Office stopped a blue Chevrolet hatchback-style vehicle near Mile Marker 56 that was failing to stay in its lane at approximately 1:56 a.m.

Deputies quickly realized why the vehicle was not staying in its lane: An injured Key deer was inside the vehicle on top of a cooler, lawn chairs and other miscellaneous objects.

The two men in the vehicle said they struck the Key deer on U.S. 1 north of the Seven Mile Bridge and initially thought it was dead. That area is not consistent with the known Key deer habitat, specifically Big Pine Key, No Name Key and patches of other areas in the Lower Keys.

The men who admitted to putting the deer in the vehicle were arrested.

The FWC charged Yoankis Hernandez Pena, 38, and Andres Leon Valdes, 45, with cruelty to animals and taking, possessing or selling a federally designated endangered or threatened species.

They were taken to jail.

The deer was taken alive to U.S. Fish and Wildlife officials on Big Pine Key where it is being treated by a veterinarian. The deer will be released back into the wild if it survives.

For more information on Key deer go to www.myfwc.com

A 44-year-old Stock Island man was arrested Saturday for fatally beating his girlfriend.

Delmon Washington was charged with the murder of 46-year-old Latisha Tiare Alce and tampering with evidence.

“These cases are never easy, but this one was resolved very quickly due to the outstanding partnerships between the Sheriff’s Office, Key West Police Department, the State Attorney’s Office and the Medical Examiner’s Office,” said Sheriff Rick Ramsay. “The suspect in this case would not have been identified and taken off the street in such a short amount of time had it not been for the great work among my staff and those partners.”

The case began when Key West Police stopped a Hyundai that was being driven with a blown tire at approximately 11:30 p.m. Friday. Washington was the driver and there were no passengers. He had a significant amount of blood on his clothes and body, but no visible injuries. He was behaving erratically. Key West Police arrested Washington at that time for DUI, resisting arrest and other charges.

Key West Police found Alce’s purse in the car and contacted the owner of the Hyundai — a family member of Alce’s. Key West Police attempted to contact Alce due to the circumstances and were not successful. The family was suspicious that Alce was not with Washington and went to the couple’s residence on the 5100 block of Suncrest Road on Stock Island.

The family found Alce covered in blood and unresponsive at the residence and called 911. Arriving Deputies attempted to revive Alce, but she was pronounced dead at the scene. Alce appeared to have suffered blunt force trauma to her face and much of her body. There was a lot of blood at the scene as well as a broken table near her body.

Washington was already in jail Saturday on the initial charges filed by Key West Police when he was additionally charged with murder by the Sheriff’s Office.

Next post What Does the Health Department’s Environmental Health Division Do?