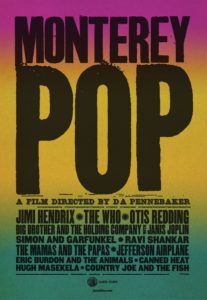 Master chronicler of the 1960s music scene D.A. Pennebaker (Don’t Look Back), delivers another wonderful and heartfelt time-capsule with “Monterey Pop,” first produced in 1968 and now restored to its original potency.

[“Monterey Pop” will be screening at the Tropic Cinema starting Thursday, June 30. See https://www.tropiccinema.com/movie/music-on-film-monterey-pop/ for showtimes.]

The documentary, a florid explosion of intensity and joy, details the artists of the Monterey Pop music festival and also gives plenty of attention to the audience and the surrounding crowd.

Here we see a young America as it was in 1967: smiling and blissed out faces dancing spontaneously with saffron-speckled cheeks and large floppy hats, the entire crowd swaying very much like human sunflowers.

Music is ecstasy and this was most evident in Monterey, where the audience and the sound produced on the stage became one and duality vanished.

Pennebaker is an experimenter as well as a director and his handheld camera moves exquisitely with the music. At times he edits fragments of faces to pulse with the rhythm of the music as if to express that all elements within this festival are part of a living kaleidoscope.

There are shots of young adults rolling out sleeping bags and cuddling. There is a shot of a man trying to get an uptight cop to laugh. Girls move slowly in quiet abandon while another sits by herself taking a voluptuous bite of a red apple.

The Mamas & The Papas are on stage with “California Dreamin.” Mama Cass sings wonderfully and richly, a psychedelic presence of outrageousness and wonder. Janis Joplin is here, too, her voice a delicious scream of feline power. Jimi Hendrix struts, a Prince in yellow and orange. Like Antonin Artaud and Jim Morrison, he is drunk and crazed with sound. At the end of his gig, he transforms his guitar into a long-necked sexual swan god, and rock fans know the piece de resistance. Grace Slick delivers her deep throated sorcery and The Who rocks along with Roger Daltry in his long locks, clothed in Byronic finery. Their pulverization of equipment causes some alarm and dismay.

In the last act, Ravi Shankar puts a beloved instrument to his heart, treating a sitar as an instrument of jazz. Shankar’s melodies spin on and on, seemingly infinite, spooling forward and backward in rolls of purple thread. The crowd is entranced. Minutes pass. The sitar rolls on, punctuated by the tabla. Despite the endless tumbles and falls of this exotic device, the people remain hypnotized watching the musician’s enchanted fingers. Again and again, Shankar teases at a climax, only to continue on.

“Monterey Pop” is a wonderfully poignant satellite of the past, full of motion and color. It is an effervescent yet intense look at a place and time that wasn’t divided by labels or differences. In 1968 Monterey, music was “It” and the only thing we needed.