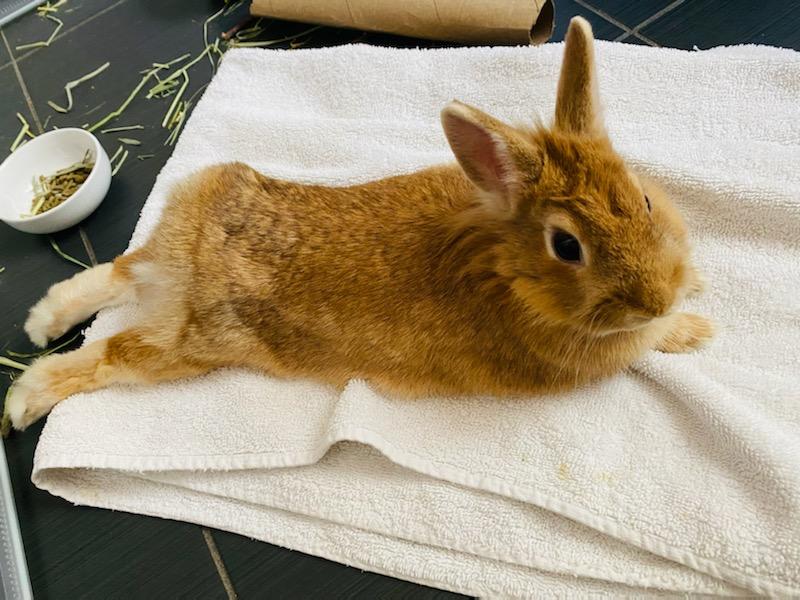 When Chelsea laid eyes on Jack Skellington, it was love at first sight! The tiny, fuzzy bunny grabbed her heart and the wheels of her mind immediately begin turning. She had been thinking about getting a rabbit for a while. When she met Jack, that idea gained enough momentum to begin the adoption process.

Jack and two other members of this young rabbit family, Zero (another male) and Sally (a female) had been surrendered to us and were waiting to be neutered/spayed so they could be adopted. Chelsea began visiting Jack frequently while we waited for his surgery to be done. Meanwhile, we provided resources with accurate information about rabbit care, housing, medical information, and supplies needed so Chelsea could be well-prepared for Jack when he came home.

We strive to educate others about rabbits. The sad fact is many rabbits don’t even live a full year as pets since they are too often obtained from sources who do not provide an education about rabbit needs and appropriate care. Rabbits are perceived as cuddly little creatures who live in outdoor hutches, are inexpensive and easy to care for, and make great pets for kids. Unfortunately, none of these things is true! These myths and others are only a few of the reasons why rabbits are the third most common animals brought to shelters. Many others are set free/dumped/abandoned on the streets, where too often their fate isn’t good. The FKSPCA gets many rabbits as strays, found running loose in neighborhoods after they have escaped or been released when no longer wanted. While some domestic rabbits survive on their own, their lives can be hard and short due to predators, cars, and the elements.

Chelsea did her homework and prepared her home while she waited for Jack. Unfortunately, her wait became an extended one. After Jack’s neuter, he developed a minor complication which required a bit more time to heal. Chelsea was incredibly patient and continued to visit him. Each time she visited she also spent time with both Zero and Sally. As time passed, a new friendship began to form. Chelsea noticed that Sally engaged with her much more than Jack did, always coming to the front of the cage and soliciting her attention. In comparison, her first love, Jack, appeared to be uninterested. She began to wonder if maybe Sally was the rabbit she was destined to take home. However, by the time this came to light, Sally was already promised, along with her brother Zero, to another adopter. Though Chelsea may have been a bit disappointed, she was still excited to adopt Jack.

Life has such a funny way of unfolding. On the very day and exact hour that Chelsea came to take Jack home, Zero and Sally’s adopter arrived and told us he was rethinking. He had decided to start out with just one rabbit. It was Zero he wanted, which meant Sally was now available. It was an emotionally hard and bittersweet decision for Chelsea, but she chose to adopt Sally, the rabbit she felt most connected to. Given our experience with helping people find good matches, we felt this was the right decision for everyone, even for Jack! As of now, both Sally and Zero are in good homes where they are loved. But just so we don’t leave you feeling sorry for Jack, there are conversations taking place as we write this. Chelsea is considering becoming a two-rabbit home, reuniting Jack (who she can’t seem to get out of her mind) with his sister and making him part of her family too. We are keeping our fingers crossed!

If you currently have a rabbit or are thinking of adding one to your family, we’d love to talk to you about all-things-bunny. Our goal is happy, healthy, house rabbits thriving with humans who love them!  If you would like more information, please contact us at info@fkspca.org or message us on our Bunnies and Buddies of the FKSPCA facebook page: https://www.facebook.com/BunniesandBuddiesSPCA 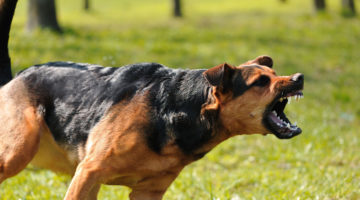 Rescue Tail / Christmas in July at the Florida Keys SPCA 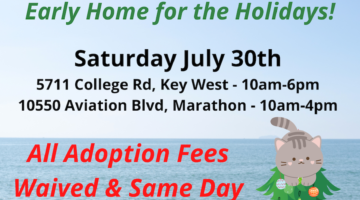 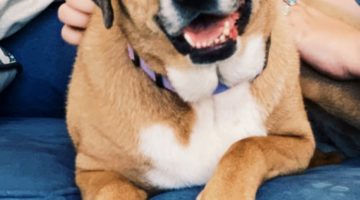