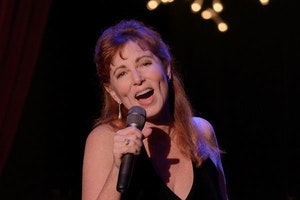 Few singer/performers put their heart into their craft the way Kim Gordon does.

For years the Key West songstress has been singing and fund raising her heart out for a variety of charitable causes in the Southernmost City. In the process, she’s raised a half-million dollars for righteous projects, and made a name for herself as one of the best singers in town.
At 8 p.m. on Jan. 18, this remarkable vocalist, who retired to Key West after a stellar career in music, journalism and small-business marketing, will once again wear her heart – as well as her deep love and sense of commitment to this community – on her sleeveless gown, as she takes to the stage in a rare live performance she’s calling, appropriately enough, “Kim Gordon: Music With Heart.”
The name of the show, which she describes as “a unique musical mix that’s funny, romantic, swinging, and sexy,” is doubly appropriate, as it will be the first performed under the banner of her newly established 501(c)(3) non-profit organization Music With Heart, Inc.
The proceeds from the show and the Champagne and Dessert After Party, both at the Key West Theater, 512 Eaton St., will go towards paying for the living expenses of clients of the Cancer Foundation of the Florida Keys as they’re undergoing treatment for that terrible disease.
“It’s really a cabaret,” said Gordon, who possesses a three-octave voice (the same vocal range as the late, great, Freddie Mercury.) “We’ll be performing love songs, break-up songs, and everything in between. It’s a very ambitious project, and my first concert here in two years. Every one of these 20 songs and medleys, more than half that I’ve never performed here, will tell a story.”
Along with her all-star band, including legendary Paradise Big Band leader Joe Dallas on bass, “unsurpassed” drummer Hal Howland, “masterful” pianists James King and Ann McFarland, and Grammy-nominated saxophonist Tim Mayer, Gordon plans to lead her audience on a musical journey like no other.
From Broadway and the great American songbook, to avant-garde pieces made famous by the likes of Kander and Ebb, Lerner and Loewe, Stephen Sondheim and Jerry Herman, to Michel Legrand and Jason Robert Brown, this is a concert with heart, and music Key Westers don’t hear performed locally that often – if at all.
Gordon, however, is somewhat tight-lipped about the actual titles of the material, preferring to present Key Westers with a spontaneous surprise.
“It’s a very lyrically driven show, with a band that really cooks,” Gordon said. “I’m so excited to be performing with this band, and to be sharing this music with the audience.”
The singer plans to pull out all the stops at the Champagne and dessert after-party as well, making it an event to remember in itself. She said, “There’s a fun and delicious After Party thanks to The Half-Shell Raw and Turtle Kraals Restaurant plus our other generous sponsors 21st Century C.A.R.E., Boyd’s Key West Campgrounds, Lower Keys Medical Center and the Spottswood Companies.”
“It won’t be just another rubber chicken dinner,” she said with a laugh. “The Key West Theater is the perfect place to hold this special evening, as I’m sure everyone who comes will agree.”
Gordon, who has won numerous awards for her local charity work is also excited about the launch of her non-profit, and its mission to raise funds through music and the arts to help people in need in the Florida Keys. “We raise money through music and donate it to the non-profit charities working in the trenches to help our friends and neighbors here,” she said.
The organization’s new website www.KeysMusicWithHeart.com is now live, and offers plenty of information about the numerous opportunities available to those who wish to contribute to the cause with their time, or sponsorship resources.
“A special community like this deserves the many great non-profits that help make us what we are,” she said.
And, of course, a very special show.

To become a sponsor contact Music With Heart Inc. 305-745-2030.
Tickets for the concert are available at the Key West Theater box office, and at www.thekeywesttheater.com