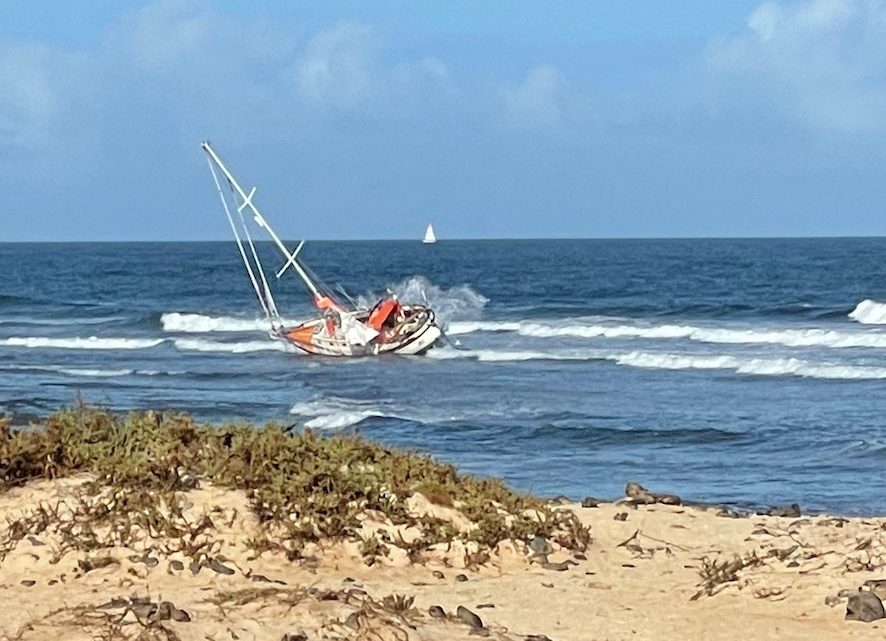 Breaking news from Golden Globe officials:
At 05:45 Local Time SEPT 18. Guy DE Boer and “SPIRIT” his Tashiba 36 hits rocks 50 meters from the beach on the NORTH coast of FUERTEVENTURA Las Palmas Island in the Canary Islands.
At 04:10 local time, Kersten Neuschafer called race control by satellite phone to report a MAYDAY VHF call from Guy who was on the rocks and drinking water. The local Coast Guard had also responded to the Mayday call. GUY wasn’t sure of his position at the time. Race control established contact with the Rescue Coordination of Spain.
At 04:24, Guy called regatta control and reported that the boat tilted 45 degrees and was being hit by a strong wave that dragged water and into the rocks. He had his life raft ready, had reported his GPS location to the Coast Guard and was in contact with VHF with them and was worried about leaving the boat in the dark and heavy tide as he said it wouldn’t last long. Could not see the beach. With the waves crashing on the boat, we lost touch.
At 05:10, the Spanish Rescue Coordination Center reported that local police and firefighters were on the beach and that it was 50 meters away from the beach, but refused to leave the ship at that time.
At 05:36, Guy called race control reporting he was safe at the beach. Spirit had crawled through the rocks some distance and then the local lifeguard swung through the waves toward him and helped him off the boat. He seemed in good spirits and that a local rescue company was already considering trying to save the boat in daylight if possible.
At this time Guy is safely on shore and coordinating with salvage operations. Golden Globe officials report that the film crew is at the site reporting the boat still dry inside and hull seems intact at the moment. volunteers are removing all fuel from the tanks. This spot is a big surf beach and the hope is to salvage the boat in one piece to minimise impacts but there will be challenges.
[livemarket market_name="KONK Life LiveMarket" limit=3 category=“” show_signup=0 show_more=0]