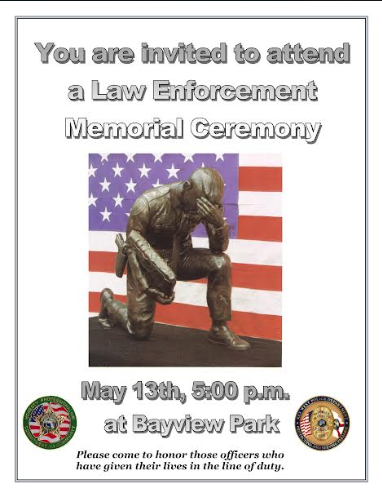 The Monroe County Sheriff’s Office and the Key West Police Department will be at Bayview Park in Key West at 5 p.m., Friday, May 13, to honor those officers who have given their lives in the line of duty.

A 50-year-old Stock Island man was arrested early Thursday morning after he held a knife to a woman’s throat and threatened to kill her.

Florencio Francisco Suarez was charged with aggravated assault with a weapon and robbery.

Sheriff’s Office Deputies were called to the 5500 block of 5th Avenue on Stock Island at approximately 1:30 a.m. regarding a domestic battery.

The 46-year-old female victim stated her ex-boyfriend, identified as Suarez, had been drinking when he became angry and accused her of cheating on him. He then grabbed a filet knife and gravel rake. Suarez put the knife to the victim’s throat and threatened to kill her.

Suarez then grabbed the victim’s phone. She was able to run to a friend’s residence nearby.

Suarez was taken to jail.

A 19-year-old Homestead woman was arrested Thursday morning for fleeing from a Deputy and then admitting that getting arrested was on her bucket list.

Janiya Shaimiracle Douglas was charged with fleeing and eluding.

Sgt. Dosh turned on his lights and siren, but the Toyota did not stop and continued southbound until finally stopping at the 3-way intersection at County Road 905.

The victim stated getting arrested was on her bucket list since high school.

Douglas was taken to jail.