Streets for People / Will Deal on Cruise Ships Finally Lead to Closing the Gap at Admiral’s Cut? 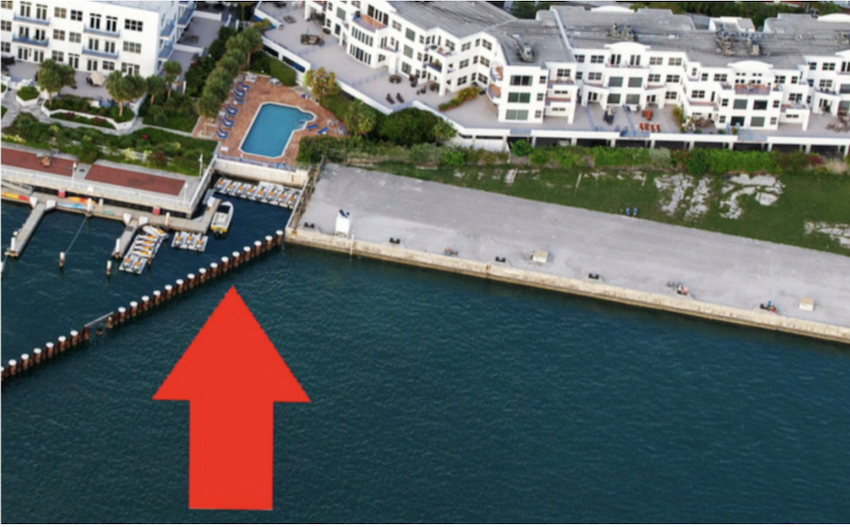 Streets for People / Will Deal on Cruise Ships Finally Lead to Closing the Gap at Admiral’s Cut?

For more than a decade and at least as long as we’ve been discussing plans for Truman Waterfront Park in earnest, it seems we’ve been talking about closing the gap at Admiral’s Cut. The cut is a nearly 50-foot waterway gap in the walkway between Mallory Square and the Margaritaville Resort on the one-side and the Truman Waterfront Park on the other. If not for the break, one could walk from Zero Duval and the Sunset Pier all the way along our beautiful sunset waters to the U.S. Coast Guard’s Ingham Museum and on to the Coffee Butler Amphitheatre and Fort Zack Park in a matter of minutes. But because of the gap, one must walk a circuitous additional 30-45 minutes – if you know the way – just to transit those 50 feet. That’s ridiculous.

The gap exists because the people/corporations who’ve owned the property over the years didn’t want it open to the public. It’s not surprising, given the self-centered owners, the City hasn’t been able to negotiate a resolution all these years. The City Attorney has been reluctant to go the route of an eminent domain fight that was called for as long ago as 2009 by then Commissioner Rossi. Around this time last year Mayor Johnston returned to that idea as a negotiating tactic as talks finally seemed to be on again. Then the cruise ship referenda thwarted those talks as it is those very same owners who have the long-term leasing rights to Pier B.

At last week’s February 15 City Commission meeting a cruise ships compromise was the big item on the agenda. It looks like the City is moving toward a two-pronged approach. 1. Not allowing cruise ships at its two piers and 2. Working with Pier B on amending the existing agreement to come closer to the spirit of the referenda limits. The talks with Pier B are an opportunity to also close the gap at Admiral’s Cut as part of a new agreement. City leaders seem to agree. 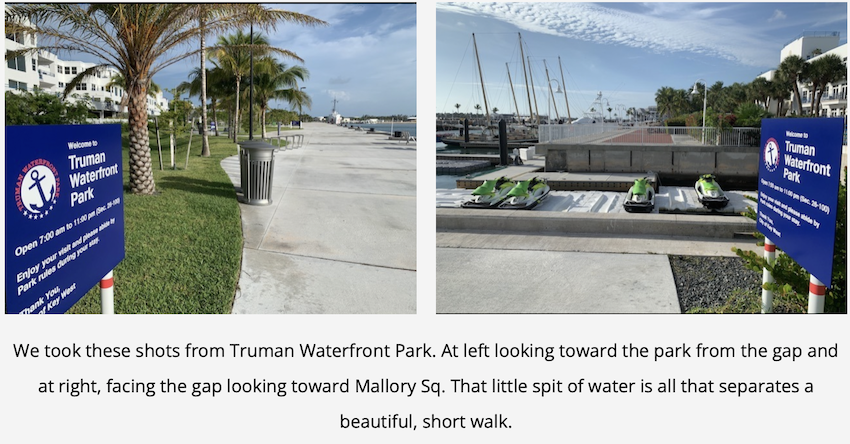 A Long History of Obstruction, a Flurry of Activity and then Back to Square One

Ever since the Navy gave the City the land that is now the Truman Waterfront Park in 2002, people have been discussing how wonderful it would be to have an extended walkway along the water. And ever since the idea popped up, it seems the owners of the private hotel that includes the walkway have been reluctant to provide access. Reasons over the years have ranged from increased pedestrian traffic along the walkway and proposed bridge over the gap disturbing the peaceful enjoyment of the property by their hotel guests or spoiling the view, to angst about a potential restaurant on Mallory Square competing with their restaurant. The reasons may have varied, but the answer was always the same. No. Or at least until the end of 2019 when talks seemed to get serious.

At the end of 2019 we reported: “City Manager Greg Veliz said in a recent meeting among the city staff, Joe Walsh and representatives of Margaritaville, which owns Admiral’s Cut, was “overall good news.” Veliz said the Margaritaville representatives did not oppose opening the cut, though they asked for additional time to put together their considerations for city review.”

In March, 2020 The Weekly reported: “We have received an initial proposal from the Tannex Corporation, also known as the Walsh family, who owns the Margaritaville Resort and Admiral’s Cut,” City Manager Greg Veliz told the city commissioners on March 3. “It’s very, very early in the negotiations, but we have received an initial offer that’s not outlandish, so (City Attorney) Shawn Smith and I will arrange a meeting to pursue these negotiations and hopefully turn that into something we’ve all wanted for several years.”

In August 2020 The Citizen reported that previous to the cruise ship referenda Margaritaville owners appeared willing to break the impasse but wanted limits on a proposed Mallory Square restaurant that would compete with Margaritaville’s existing waterfront eatery, Bistro 245 and asked that security cameras be installed at the site, security personnel patrol the area at night and the city foot the cost of the bridge. City Manager Greg Veliz is quoted as saying the offer was “not unreasonable.” But the crux of the story was that the negotiations were dead as the City Attorney said: “We’re a defendant in litigation brought by the owners of Admiral’s Cut. So, I wouldn’t say they’re falling over themselves to give Admiral’s Cut to the City of Key West at this time,” Smith said.” And that’s where things have stood since. 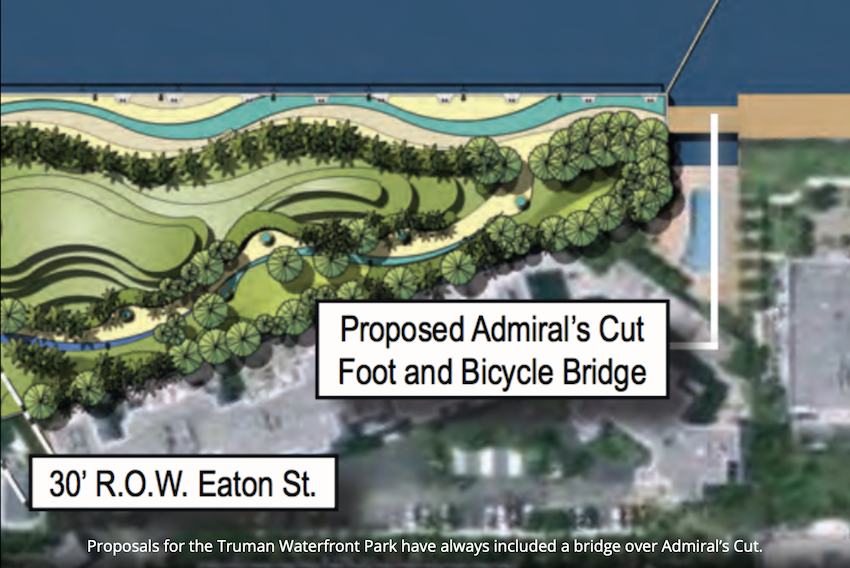 As the Truman Waterfront Park planning was finalized, a Development Application to be used as a precursor for construction in 2013, clearly indicates a “waterfront promenade with a proposed connection to Duval Street via the Admiral’s Cut pedestrian and bicycle bridge.” Our research into old news stories show Commissioner Jimmy Weekly as a champion and urging the City to negotiate closing the gap before construction started on the park. Saying at the time:

“Access across Admiral’s Cut would serve an important public purpose, providing access to the waterfront history of Key West, as well as a scenic and efficient pedestrian rout around the most dense commercial and residential part of town. We’re getting ready to break ground in another four months or so. If possible, let’s start the conversation now instead of later.”

Also, in 2013 the City Commission heard a PowerPoint presentation from 10-year-old Adelle Barsky-Moore about constructing an 85-foot “Rainbow Pride Bridge” over the gap. According to a news report at the time, Barsky-Moore, whose parents are gay, first conceived of the Rainbow Pride Bridge for a 4th grade class project, spending three weeks building a popsicle-stick model and crafting a presentation.” Commissioner Weekly is quoted as saying at the time “I thought it was a brilliant idea. I’m going to push this forward and try to get this accomplished.”

Years later, in March of 2020 as negotiations were engaged in earnest again, the Commissioner “reminded the commission of a presentation they had heard several years ago from a young woman who envisioned what she called “The Rainbow Bridge over Admiral’s Cut.” Weekly asked the city clerk to dig up the presentation to consider once negotiations with the resort owners have been finalized.” (The presentation can be viewed here by clicking on See Gallery at the bottom of the story.)

I wonder what a now 20-year-old Adelle thinks about her idea languishing for almost a decade. 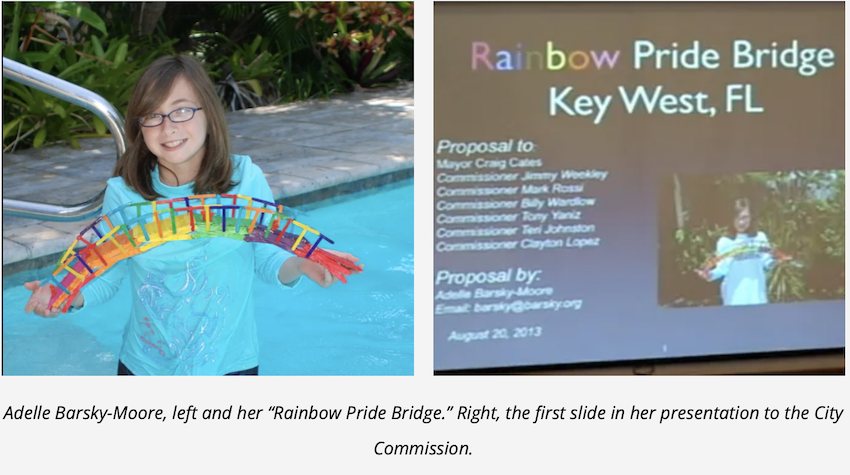 Arts and Culture Master Plans Says Close the Gap Too

An Arts and Culture Master Plan, approved by the Commission just a few months ago addresses closing the gap. The plan was developed via 800 surveys and two big community meetings by Elizabeth Young, the City’s Public Arts Administrator who also worked with the City’s Sustainability Coordinator Alison Higgins, the Art in Public Places board, the Bahama Village Music Program and the Studios of Key West to develop the plan.

The plan calls for enhancing physical connections between the park and surrounding neighborhoods, including supporting a bridge over Admiral’s Cut and increased signage that draws visitors into the bordering neighborhoods by relating historical facts about them. 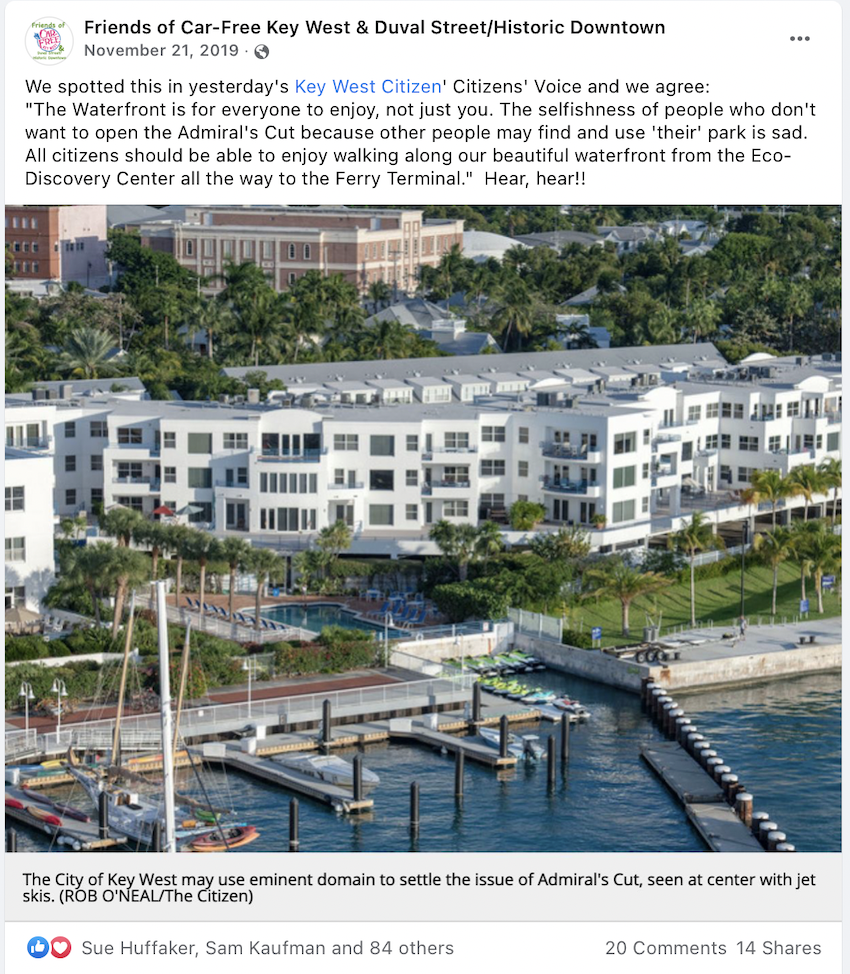 Complaints on Social Media About Tourists Using “Our” Park

We should note not everyone is a fan of closing the gap. We noticed last year as Admiral’s Cut gained traction in the news that some people took to social media to complain that closing the gap would allow tourists to use “our” park. While we certainly understand a desire for quiet enjoyment of our local park, the idiocy of forcing people to walk 35-45 minutes out of their way to traverse 50 feet is reason enough to allow for a for more people in the park. Our observation is that the park is barely used as it is, except for Thursday Farmer’s Markets and special events. And without the potential of multiple cruise ships in port anymore, the likelihood of the park being “overrun” by tourists is substantially reduced. Let’s hope this sentiment doesn’t rear its head as Admiral’s Cut makes news again.

Time to Finally Close the Gap

Last week’s Commission meeting provided some hope that closing the gap would be addressed when the City, Safer, Cleaner Ships and Mark Walsh and the owners of Pier B get together in mediation. After Mr. Walsh came to the microphone to simply say they were in the house and “were looking to continuing to engage and find a solution” Commissioner Kaufman asked: “Can we address admiral’s cut during these discussions, can it be one of the topics in mediation?” Mr. Walsh responded: “I’m sure any topic is open in mediation.”

While not a ringing endorsement, the door is open.

We weren’t surprised the Weekly papers reported that “Commissioner Jimmy Weekly also wants the March 1 mediation process to include the possibility of Pier B allowing public access to Admiral’s Cut.”

Commissioner Greg Davila told us this week: “I believe the bridge over Admiral’s Cut is a necessary component of the City’s negotiations and I am optimistic that all parties will come together on this.”

For a more walkable downtown, let’s hope Commissioner Davila is right and wish our negotiators well.

Chris Hamilton is founder of the local advocacy group Friends of Car-Free Key West & Duval Street/Historic Downtown. He’s a native of the District of Columbia, where for a couple decades+ he led nationally renowned efforts promoting transit, bike, walk and smart growth for Arlington County, VA’s DOT. Chris has lived in Key West since 2015. He lives car-free downtown and works and volunteers for a couple non-profits. Follow him on Twitter here and his blog here.

Previous post 3G cell phone networks to be phased out