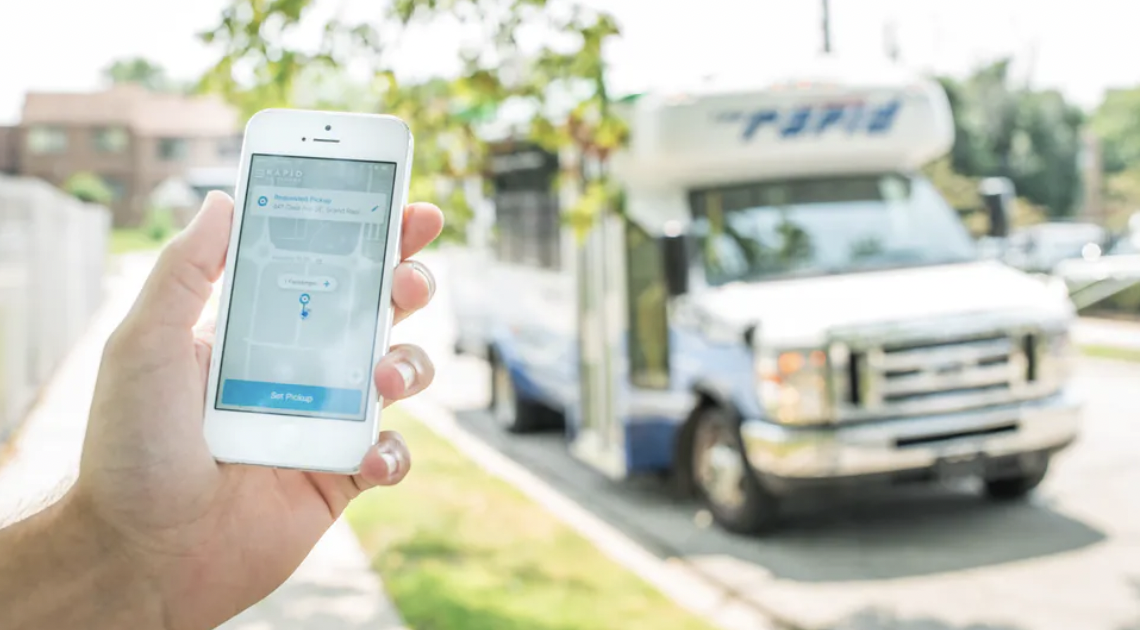 At its Tuesday meeting the City Commission approved a $248,880 competitive bid exemption contract with Via Transportation, Inc. to provide Key West Transit with the hardware, software, training, marketing, and support for a one-year On-Demand transit pilot program – set to begin within three months of contract signing. The pilot proposes to eliminate Key West Transit North and South Line routes and evening Duval Loop and replace it with an on-demand, bus stop-to-bus stop service that would work like Uber. Officials say the change will provide better service. This is good news because a healthy, green, and prosperous island needs a well-functioning transit system as an alternative to the congestion and pollution the increasing number of cars brings to our paradise. And our beleaguered workforce needs a decent option to the spiraling costs of commuting by car. Let’s dive into why this is a necessary move, discuss what this might look like in practice and venture how this change may help the diminished Duval Loop and potential future services.

If You Can’t Find Drivers – Try a Different Tactic

The agreement with Via is good news as the program was talked about during last year’s budget process as an alternative to a long planned but more costly program of hiring more drivers to provide more frequent service. As has been widely reported, it’s been nearly impossible to hire drivers at the existing wages with housing costs going sky high in the Keys. So, if you don’t have enough drivers, this is a necessary move, because there’s really nothing more one can do than try something radically different. We give Key West Transit credit for trying something where they say they can provide more service with less drivers. Says Director of Transportation Rod Delostrinos:

“On-Demand Transit allows for the City of Key West to use its transit resources more efficiently. Transit vehicles within the city area will eventually operate only with trip requests thus eliminating empty or near empty vehicles from continuous circling of set routes. Fuel savings, better personnel utilization given a 55% shortage of CDL (Commercial Driver’s License) drivers, and reduction in carbon emissions are a few of the anticipated positive impacts.” 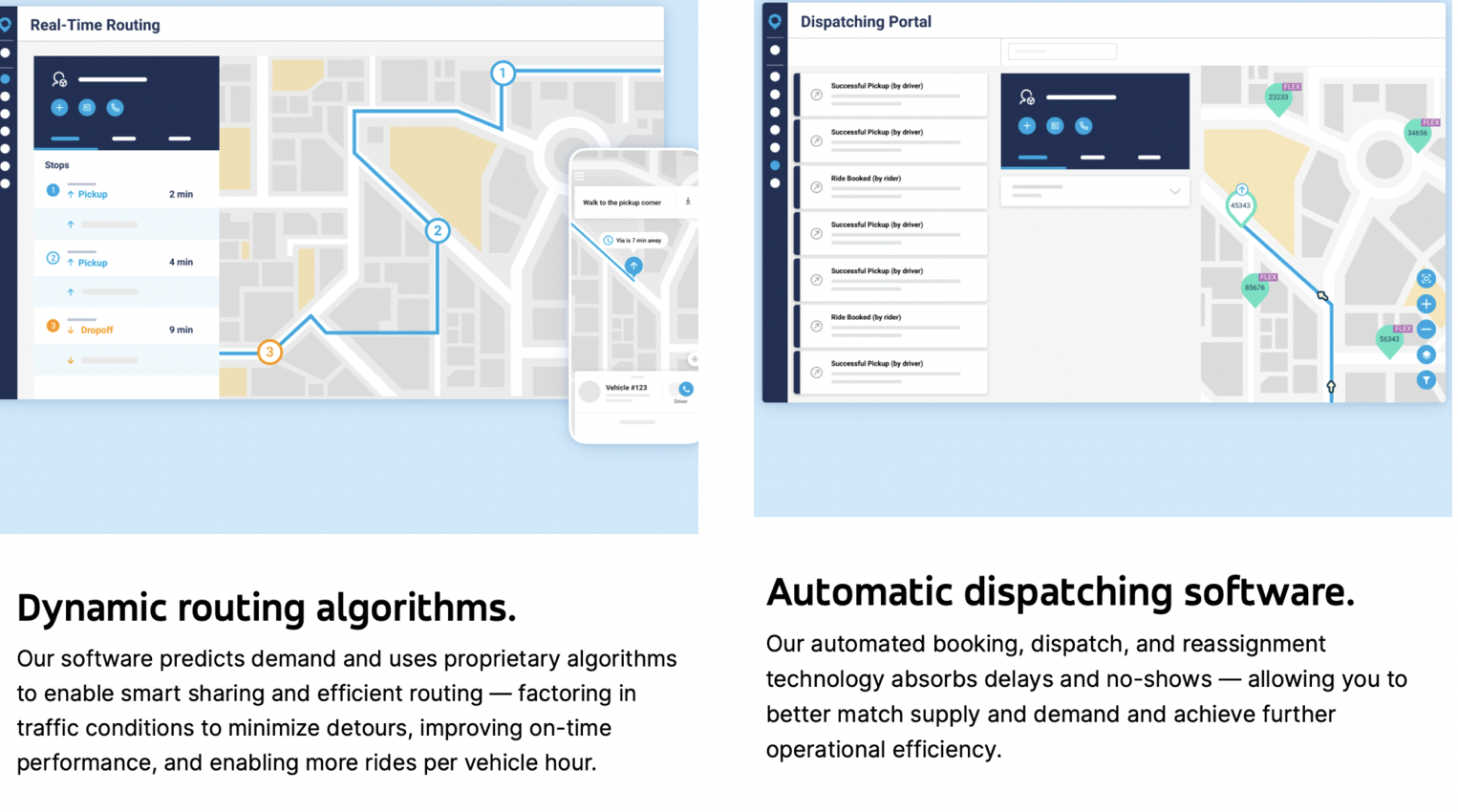 While There’s Been Delays, It May Be Worth the Wait

Originally the City hoped the program would roll out last December and then again at the end of January. It didn’t happen because the project was more complicated and costly than originally thought. More money was needed than the $45,000 initially set aside. Thus, the delay in waiting for an FDOT grant available this summer that will cover $250,000 of a one-year pilot project now costing $312,500.

One of the complications with the service is its reliance on a smart phone as the optimum way to use the service meeting the reality that some transit customers, especially the existing transit-dependent ones, might not have them. As a public service, Key West Transit is obliged to offer an alternative way to access the bus for people without smart technology. This necessitates a call center to take phone calls for trips and kiosks that can do the same at the most used bus stops.

Key West Transit is run on a shoestring and just doesn’t have the people for a seven-day-a-week, round the clock call-center. Nor does it have any real marketing staff. The contract with Via provides both a call center and marketing assistance.

So, by delaying the project Key West Transit was able to find additional money to cover needed items that will make the project work better. In the end, we’re hopeful that’s a good thing.

How This On-Demand Project May Work

The on-demand transit pilot will eliminate North and South Line fixed routes completely. It will also eliminate evening Duval Loop service. The buses that would normally serve those routes would then be available for on-demand service.

Customers would download an app on their smartphone. Using the app, just like with Uber, one would select a pick-up point – the nearest bus stop, a drop-off point, again selecting the nearest bus stop, and a time for travel. The software behind the scenes, figures out the best routes and for efficiency combines this with other traveler’s needs, and comes back with an appointed time and route. Usually within a 15-minute window. You then go to the bus stop and get your ride. As with an Uber or Lyft, you’ll be able to track the progress of your ride.

Customers should be able to book in advance and book regularly recurring trips, like ones to and from work, or more intermittently scheduled trips like to the gym or doctors. We understand you may also be able to pay via the app, so you won’t need to carry around the exact $2 fare needed for each trip.

Customers can also do this by telephoning the call center. Via will operate the call center and has options for going 24-hours a day if needed. The project also has money to set up a few kiosks at the most used bus stops. A kiosk would be placed at the bus stop and a person could follow the prompts to get a pick-up in real-time. 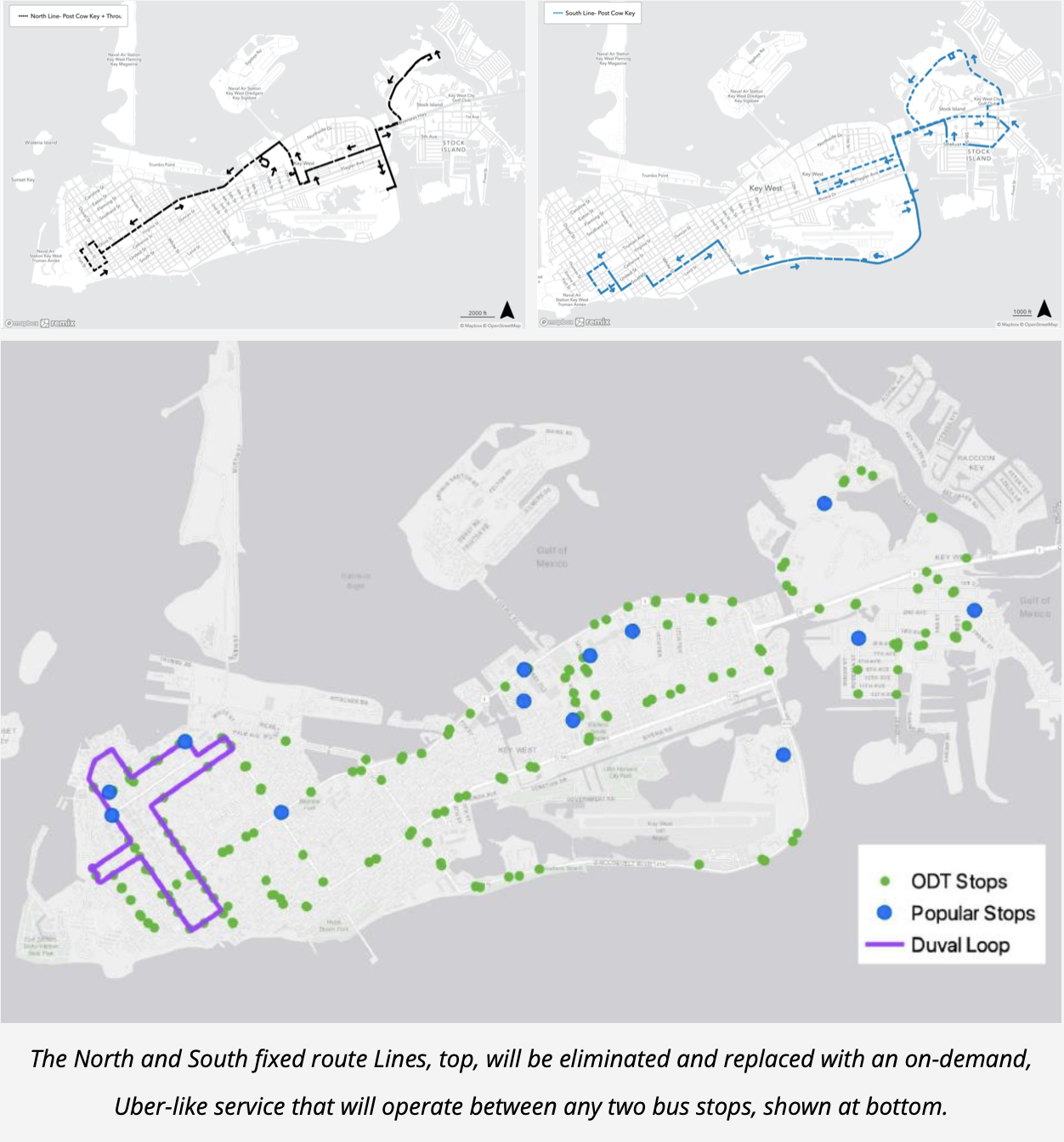 Mr. Delostrinos believes the efficiencies inherent in the system, responding to demand, rather than the need to put a bus out on a schedule, means his team may be able to use less drivers and buses and thus expand the span of service. This could mean we’ll soon see service until 3:00 AM, allowing for late shift workers to rely on the bus. This is a development that should help Key West workers.

If the transit agency is right and they can provide more service using less drivers that opens possibilities for better service on the Duval Loop and for partnering with the County and a private sector micro-transit vendor to bring frequent service to downtown for new residents on Stock Island.

We’ve documented how the lack of available drivers has degraded the service on the Duval Loop. Ridership is currently 1/5 what it was in 2019. That’s partly because service that used to be every 15 minutes is now between every 30 to 40 minutes. And the lack of CDL drivers has necessitated using smaller non-branded vehicles on the route. If the efficiency in drivers is real, meaning that the agency can meet the demand for service using less drivers, than theoretically that may mean they have enough workers to put two drivers on the Duval Loop route at a time and get back to 15-minute frequency. That could be a huge win for a service that has been hemorrhaging riders as the frequency has decreased.

We’ve discussed the need for more transit and bike options from the 667 new housing units coming to Stock Island over the next couple of years. As a result, the County is exploring a partnership with the South Florida based private company called Freebee to provide its on-demand ride hailing service to residents to help mitigate congestion on U.S.  1. If this happens it is likely there’d be some micro-transit available from one’s home on Stock Island to a central hub, where a frequent direct shuttle could take residents right downtown. However, for this scheme to work Key West Transit would need to cobble together enough drivers to make a frequent shuttle from the island work. So, IF they can provide the on-demand service with less drivers, theoretically that may mean they’d have some extra drivers to put on this potential new service. We promise to follow-up in the coming weeks with a story on the potential service with Freebee.

The Transportation Director also notes that analyzing the customer data – where people get picked up, dropped off and when – generated by the on-demand system will enable Key West transit to potentially develop new efficient fixed route, circulator and/or express services in the future. 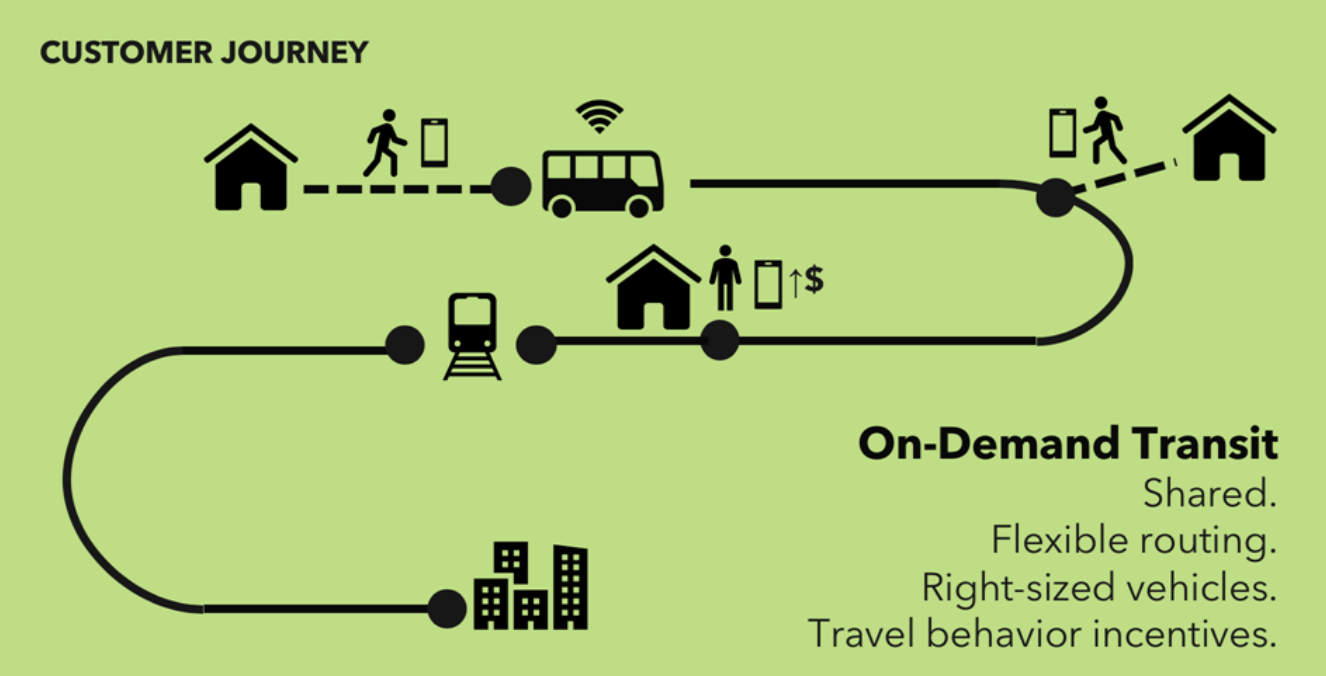 When Life Give You Lemons, Make Lemonade

We’ve advocated Key West leaders follow their own multiple plans to invest more dollars in transit, hire more drivers and increase frequency on fixed routes. In the current year the City set aside $2.8 million or $5,417 per employee to raise salaries and help address the increasingly urgent housing affordability crisis. It seems little of this has found its way to Key West Transit bus drivers as starting hourly rates for CDL drivers are $20 an hour and $16 for non-CDL drivers. Perhaps most of the money went to those white-collar workers already at the top of the wage scale.

The transit agency says these low wages, combined with the housing shortage, means 45% of their CDL positions are open. Since City personnel leaders seem loathe to pay blue collar bus drivers more to address the situation, the transit agency has little choice but to try this pilot program. They are counting on the fact that this can be done with less bus operators than needed on the current fixed routes. Again, good for them in thinking outside the box and trying to make lemonade.

With increases in the number of housing units on Stock Island and the continuing increase in visitors, 77% of whom arrive by car, traffic and parking congestion continue to be a top concern. We should try to get more people on bikes to help. And for those who can’t bike we need to provide excellent transit options, or they’ll just drive. According to AAA it costs nearly $10,000 a year to own and operate a vehicle. This on-demand pilot project has the potential to give people that cost-saving option. Let’s wish Key West Transit the best in making this work, because their success will be our island’s success.