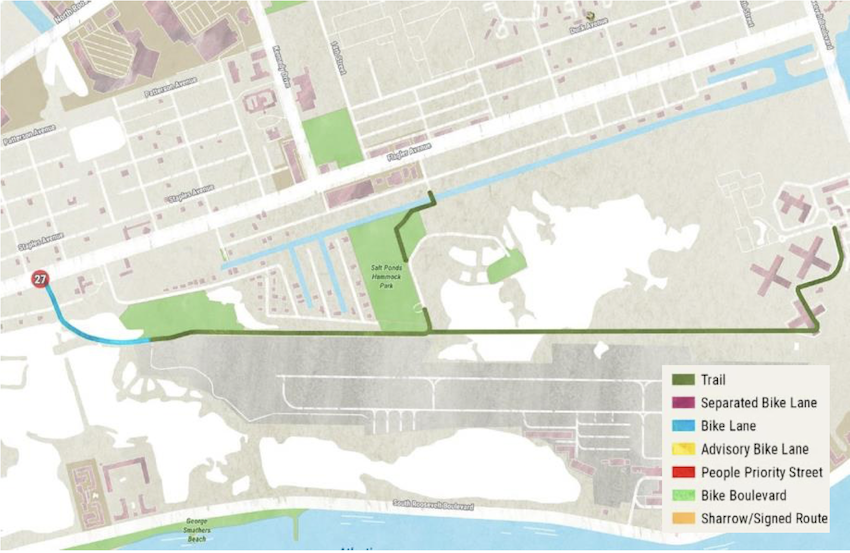 Last April the City’s then Multi-Modal Transportation Coordinator released a Transportation Report 2021 sharing that the Smathers Beach and Salt Ponds Trails, identified in the Bike/Ped Plan as important parts of a Key West bicycle network, were slated for design and planning in this year. Our story at the time set social media abuzz as long-time locals recalled using these trails as kids before they were filled in and blocked over the years. Residents agreed that bringing back these old, informal trails would provide safer and much quicker connections through the middle of town.

Now we learn that well, things are a lot more complicated as the County’s Airport’s Authority wants some land in the area of the Hawks Missile Site. We support a recommendation making its way through the City’s Parks and Recreation Board and ultimately to the City Commission that prioritizes these two trails, among other passive open space amenities. The Airport’s need may turn out to be a good thing if a deal provides the needed funds to get these important projects done. We hope the City makes a commitment to the trails as part of any action with the County. Getting these built sooner than later would make it easier for locals to commute by bicycle and provide passive recreation access to a long-forgotten gem of an area. 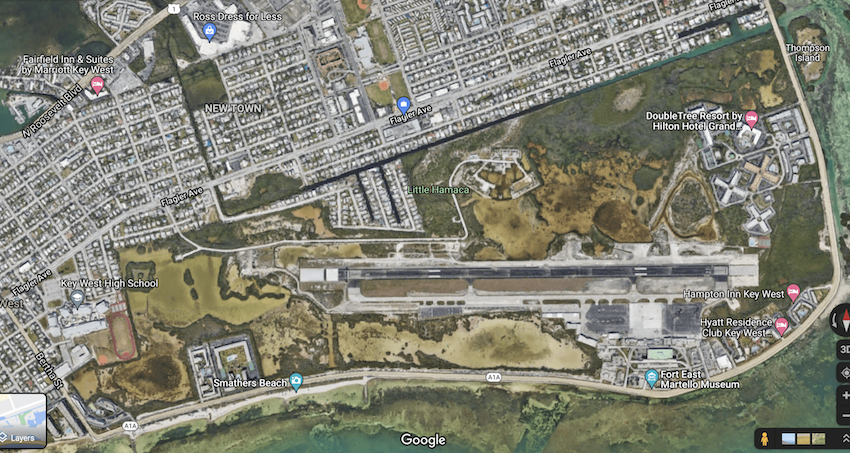 Two Trails that Take Us Back to Days of Yore – 1. Salt Ponds Trail

The Salt Ponds Trail, called the Airport Connector Trail on page 65 of the Bike Plan, would connect the communities of Ocean Walk, Las Salinas and Seaside, where a lot of the city’s workforce lives, with downtown via a time-saving and safer bike trail. This new facility would cut behind the backside of the Key West International Airport, with the ideal design being a wide boardwalk or something with limited disturbances of nature, to Government Road where it would cross Flagler Avenue at 7th Street and then connect with the Crosstown Greenway. This short-cut between downtown and these uptown communities, would take riders through the middle of town and the salt ponds, rather than out and around S. Roosevelt Boulevard. It could save bikers 10+ minutes. Don’t underestimate the difference between a 20-minute and 30-minute commute, especially when the 30-minute commute is often windswept in at least one direction along the beach.

But it seems this new trail isn’t such a new idea after all. In fact, more than 20 years ago, those “in the know Conchs” knew of and used the trail.

Tom “the Bike Man” Theisen, owner of BikeMan Bike Rental Key West, tells us that he worked with Key West Bicycle Coordinator Jim Malcolm, who held the job from January 1999 until his death in November 2008, on the Salt Ponds idea including holding meetings and mapping a path. There already was a defacto path people used. “You could walk back there, and kids would ride bikes and play paintball.” In the early 2000’s Mr. Malcom wanted to formalize it.

He tells us “The path from behind the salt ponds was complicated because the Sunrise Suites people didn’t want anyone going past their property.” He went on to explain that there is apparently an agreement that the city can have access through an easement to the Salt Ponds but because the Sunrise Suites objected, the project stalled. Even though nothing happened with the planning effort, “The area was accessible for a long time after that.”

The Bike Man goes on to say that over the years, fences were erected to prevent access and some channels dug to improve waterflow had similar effect. He ends with: “A connecting path is of course very logical and could be used for recreational purposes as well (as a good commute short-cut).”

Two Trails that Take Us Back to Days of Yore – 2. Smathers Beach Trail

The long-term goal for the Smathers Beach Trail (page 69 of the Bike/Ped Plan) is to allow the High School to connect as well allowing students to have another path that doesn’t involve Flagler. It can better connect New Town residents to Smathers without having to travel along Bertha or go all the way around past the Cow Key Channel and airport. The proposed trail also lines up with FDOT’s proposed HAWK light pedestrian crossing.

Says Bike Man Tom Theisen: “The whole area where the Cuban plane currently sits was open to the public, people drove out there and had their lunch etc. It was a nice space, and it was the start of a trail to Smathers Beach. The trail ran along the runway fence and ended at the bridal path close to the big concrete block (known as the Key West by the Sea condominium). It was easy to bike, though not paved. One day the city came in and put up a fence claiming people were dumping and that was the end of it. Years later they cut a channel where the path was so now a bridge would be needed to restore it.”

Both Trails Meet with Acclaim

During the community meetings and public surveys in preparing the Bicycle and Pedestrian Master Plan people remembered these old paths and got them put into the document. Good for them!

Former City Manager Greg Veliz was said to be a champion of these trails because it revives routes that many Conchs used to use to wander through the Salt Ponds. Maybe they were on to something with these paths in the old days. Times were simpler and people expected common sense and practicality to prevail over other considerations.

Tom Theisen says: “If the city wants to reduce automobile traffic the paths should be at the top of the list.”

When we asked Mayor Johnston about the trails she said: “I can’t think of anything more appropriate than the trails for a low impact project that advances our bicycle/pedestrian master plan.”

And when we first reported on the potential for these two trails to be built it ended up being our third most popular story of 2021 and by far generated the most enthusiastic response on Facebook as locals thought they were a wonderful idea.

Airport’s Need Is Opportunity to Move This Project Forward Quickly

On August 17, 2021 the Airport Authority Director Richard Strickland  made a presentation (PowerPoint; Video) to the City Commission. He explained that they need a little land next to one of the runways as a taxiway space. To provide for more taxiway space they’d need to take a little bit of wetland and in order to mitigate the salt marsh impact they’d have to remediate or turn something back to nature elsewhere and the perfect spot to do that is the Hawk Missile Site owned by the City. Mr. Strickland and the County are asking the City to deed them the land they need to do all this work. 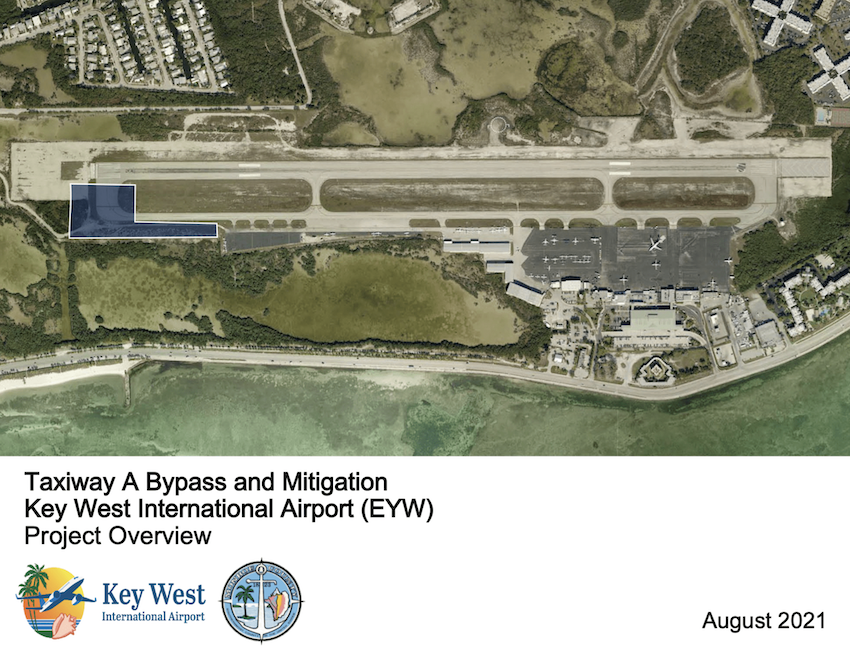 In exchange they’ve offered to do a number of things at their cost that the City has been unable to do for the last twenty years since they obtained the land because of a lack of funding and complications related to regulatory restrictions on the land. Items discussed at the meeting included the Airport Authority building a soccer field and relocating an antenna tower, currently at Higgs Beach, over to the Hawk Missile site, providing more room to do things at Higgs Beach.

At the time, Commissioners seemed to want to give the Airport what they needed if they could get some things in exchange for the community, what they called a win-win.

When we recently reached out to Airport and City officials, we heard back from the City Manager and Commissioner Davila. The Manager told us that “No proposals have been voted on by the City Commission” and regarding the status of where any transfer is right now, she said “The City Commission requested the Parks and Recreation Board make a recommendation. No transfer is in the works.” Mr. Davila said something similar.

Parks and Recreation Board to Hear Recommendation for the Site

We understand the Parks and Recreation Advisory Board should take up this recommendation at its next meeting as early as February 24. It reads in part:

“Some of the passive activities that the Parks and Recreation Board has discussed in the past to better utilize this very valuable City asset include:

Multi-use bike and recreation paths to connect access to the area to South Roosevelt Boulevard at both Key West By the Sea and at the Salt Ponds Condos and Apartments (as proposed in the Bike and Pedestrian Master Plan.”

Whatever else gets done at this site, we need the two trails to be in any recommendation that the Parks and Recreation Board forwards to the City Commission. To make your voices heard you can email the Board members here.

We’ll note the City’s Sustainability Advisory Board (SAB) was to hear a presentation from Mr. Strickland on Thursday, February 10 but as of press time we don’t what happened. They did have this Hawk Missile Site Planning Review consultant report prepared on December 15, 2021 as part of the agenda item that we think explains just how complicated anything done in this area is because of all the parties involved.

We call on the City Commission to prioritize this important multi-modal transportation project and if it makes any deal with the Airport to ensure that the Airport’s Authority builds it with their funds, or the City dedicates any funding received in relinquishing the land to the trails. Either way we need this done because the Salt Ponds and Smathers Beach Trails aim to provide convenient and safe connections that entice people to use bikes instead of cars.

You can find the 50+ KONK Life Streets for People column articles here and here and the 15 most recent stories below:

Chris Hamilton is founder of the local advocacy group Friends of Car-Free Key West & Duval Street/Historic Downtown. He’s a native of the District of Columbia, where for a couple decades+ he led nationally renowned efforts promoting transit, bike, walk and smart growth for Arlington County, VA’s DOT. Chris has lived in Key West since 2015. He lives downtown and works and volunteers for a couple non-profits. Follow him on Twitter here and his blog here.