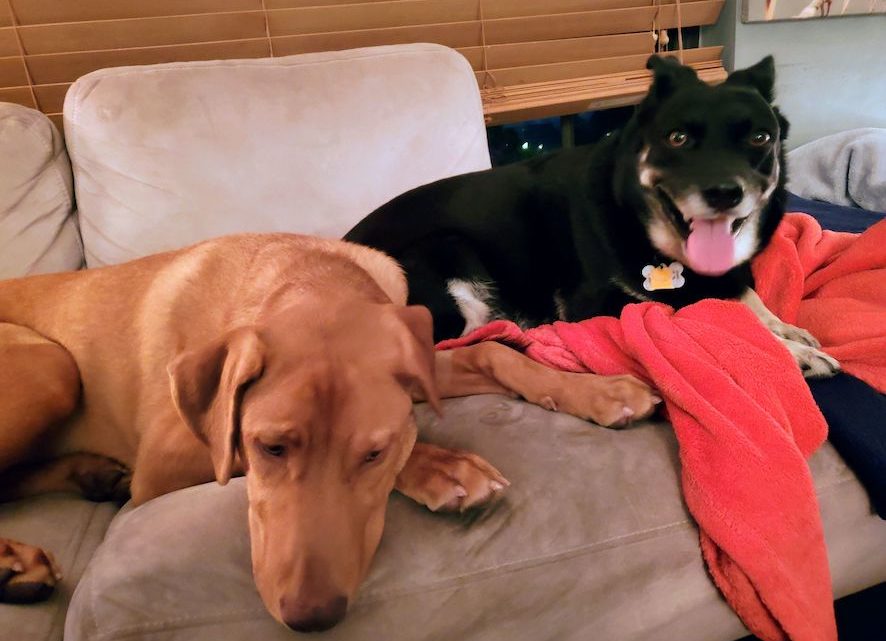 By Cathy Baier
The patience of Zuzana and her family was recently put to the test and they passed with high- flying colors! They decided they were ready to become a two-dog family and came looking for a compatible friend for Maui, the first dog they adopted from us. As we worked together to help them find the right dog, they considered a few  but none  seemed right for a family with young kids or for Maui. Safety and compatibility are always  important considerations during the adoption process.
When they saw two young pups we had gotten in, they were encouraged.  When we brought the first puppy out to meet the family, he was wiggly and totally engaged with the kids, super friendly and confident. In contrast, the second puppy Duke was  nervous and very hesitant to engage with the children. The two introductions were totally different and it appeared that the first puppy was the better choice. It seemed like a no-brainer, but we still had to introduce the  puppy to Maui. The first puppy had the same reaction to Maui as he did to the kids. He boldly ran up to Maui and started jumping around, trying to engage the older dog in play. It all was looking good to us  until Maui told us differently. After their initial interaction, Maui moved away and sat in the corner of the yard with his back to the fence, showing no interest in further interaction. There was no big displays, but his feelings were being made clear. This puppy was not his style!
We started to question if Maui really did want a friend.  Maybe introducing him to another dog might give us more information so we decided to bring out the more shy puppy to meet him. Immediately Maui approached Duke instead of the other way around. He sniffed, circled,  and even got  a little bouncy and silly. The puppy was a bit unsure but extremely polite. He curved and lowered his body, turned his head to the side, and allowing Maui to sniff and investigate him. Once the initial formalities were out the way, both dogs relaxed and in no time began engaging in friendly playful behavior. Their interaction provided  such a great example of how behavior and  relationships can be so different between different dogs. And even more beautiful, as Duke observed Maui’s comfort around the children, he  began to approach them with greater confidence and friendliness. Dogs are very good at taking social cues from each other.  Maui was an effective “social facilitator” and Duke was the beneficiary of his influence. The decision on which puppy to adopt began to  change and Duke now looked like the “right” one!
The patience test came next. Duke and his brother were scheduled for neutering and couldn’t go home until that was done. Unfortunately there were some complications with Duke’s neuter, delaying his adoption. We all felt it would be best if Duke was completely healed and his cone-of-shame was off before he went home. The healing process took much longer than anyone expected, yet Zuzana and her family had the best attitude about it all. They would come for regular visits and updates but always with smiles and understanding. Such wonderful people!!  We can only imagine the joy they must have felt when they were told he was finally cleared to go home!
Duke has proven to be a great dog and the whole family is in love with him, including Maui and his canine cousins. He has settled in beautifully and for a teenager, he’s a pretty amazing boy who has found his perfect home!
[livemarket market_name="KONK Life LiveMarket" limit=3 category=“” show_signup=0 show_more=0]

Next post An Icon is Secured for Future Generations 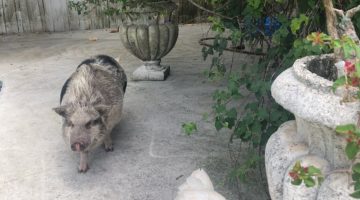 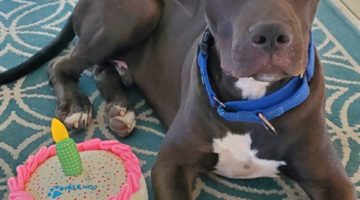 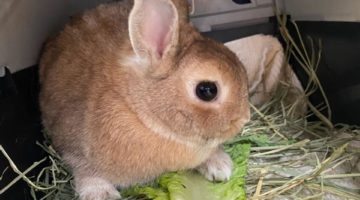