A 20-year-old Tavernier motorist was arrested Wednesday after fleeing from a Deputy while speeding on U.S. 1.

Ronald Anthony Bennett was charged with fleeing and eluding.

Bennett was clocked driving a GMC pickup truck southbound at 71 mph in a 45 mph zone near Mile Marker 90 at approximately 9:09 p.m. He increased his speed when a Sheriff’s Office Deputy attempted to pull him over.

Bennett turned onto Woods Avenue and then Gardenia Street where he stopped.

He admitted to fleeing and stated he was having a bad day.

Bennett was taken to jail. 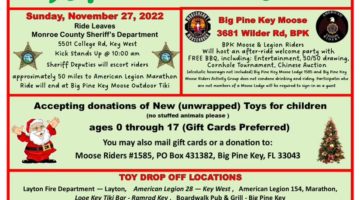