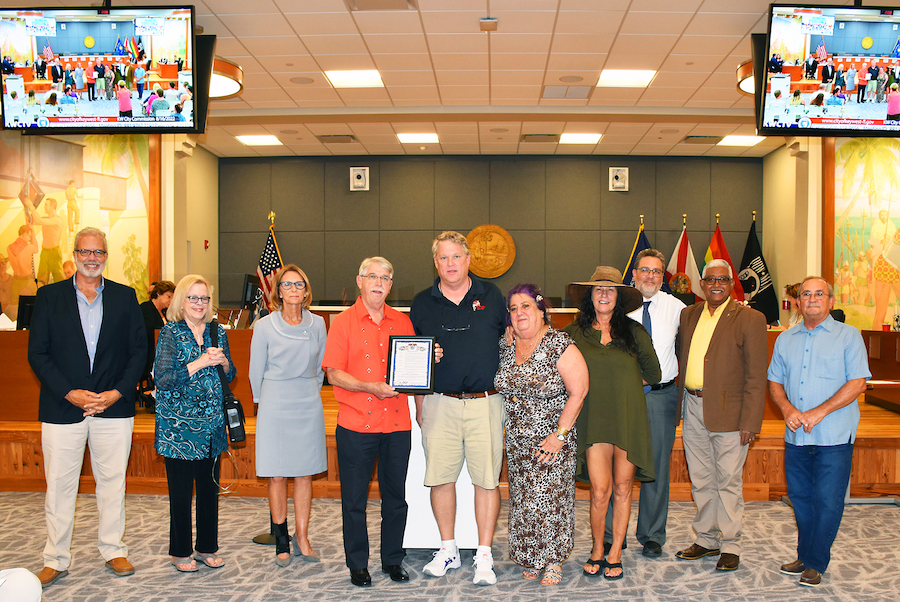 The Key West City Commission on Tuesday proclaimed August 27th as Half Shell Raw Bar Day in honor of the establishment’s 50th anniversary.

On Saturday, August 27th, the restaurant is holding a big block party “in the parking lot like we did in the 90s,” said General Manager Bobby Kuchinsky when he accepted the proclamation. The proceeds from the seafood festival will benefit the Cancer Foundation of the Florida Keys.

The Raw Bar was established in an old shrimp warehouse in 1972, serving as an anchor tenant even before the City purchased the Historic Seaport.

Twenty-nine years ago, the citizens of Key West approved a referendum to go out to bond the funding to buy what is now the Historic Seaport. That bond was paid off in 2017. In order to ensure that the seaport wasn’t built up with private condos, Commissioner Jimmy Weekley gathered a committee of local businesspeople in support of the purchase. That purchase has ensured that the waterfront remains accessible to the public.

Commissioner Weekley noted, during the meeting, that he was sitting in the Half Shell Raw Bar having a beer with a friend when he came up with the idea to preserve the Historic Seaport.

“I remember saying to my friend,” he said, “we ought to own this.”

The Half Shell continues its long history of supporting local charities with this 50th Anniversary Seafood Festival.