2019 PROPOSED BUDGET TRANSMITTED TO MONROE COUNTY BOARD OF COUNTY COMMISSIONERS

2019 PROPOSED BUDGET TRANSMITTED TO MONROE COUNTY BOARD OF COUNTY COMMISSIONERS

MARATHON, FL – The Monroe County Fiscal Year 2019 Proposed Operating and Capital Budget – which includes the County’s Constitutional Officers’ budgets – was transmitted to the Board of County Commissioners at Wednesday’s monthly meeting in Marathon.

The recommended budget is the result of months of departmental and Board level discussions. It reflects the policies and priorities expressed by the Commission. It serves as the outline for future discussions throughout the summer and early fall that will lead to the FY 2019 Adopted Budget on Sept. 10, 2018.

“I am calling this year’s budget the ‘Hurricane Irma Budget’,” Monroe County Administrator Roman Gastesi said. “The County is estimating $125 million in Irma-related expenses, including $36 million in emergency expenses that already have been paid in response to the devastating Category 4 storm that rocked all of Monroe County on Sept. 10, 2017. The budget also includes our Irma recovery efforts that will continue for years.”

The proposed budget takes into account projected revenues affected by Irma. These include a projected flat sales tax revenue, which had been increasing year to year before Irma struck, and property tax abatement granted by the Florida Legislature to financially help owners of the worst hit homes from Irma.

With an average 6 percent property value increase, the aggregate millage rate generates a total ad valorem tax levy of $90.8 million, an increase of $5.9 million over FY 2018. This $5.9 million increase is budgeted for:

·     $800,000 increase in Lower and Middle Keys Fire and Ambulance Fund: supporting an increase in fire fighter salaries. (This increase was approved last year, right before the final adoption hearing for the FY 2018 budget). The County also faced a second, smaller disaster, a week-long brush fire on Big Pine Key in April 2018 that further stressed the Fire Rescue budget.

·     $400,000 in the Unincorporated Parks and Beaches fund: supports an increase in park operations

·     $2.3 million increase in Fine and Forfeiture and Road Patrol funds: supports an increase in law enforcement and detention center functions. This includes an average 9.3 percent pay increase for Monroe County Sheriff’s Office deputies and sergeants (and a 2.1 percent COLA increase for all other MCSO employees).

“The increase is needed for the protection and safety of the public,” Monroe County Sheriff Rick Ramsay said. “These raises are strictly for deputies and sergeants – our public safety first responders – and not across the board. After Hurricane Irma, it’s been extremely difficult to get and keep employees. We have to pay competitive salaries so we don’t keep losing crucial employees to other South Florida agencies.”

The levy increase will support operational increases including one new fulltime employee for Emergency Management, two fulltime employees for Bernstein Park that were approved in May, service vehicles for social services, public records tracking and retention software, communications hardening and the increased every day costs for government operations and contracts.

The proposed budget absorbs the impacts of Irma, while continuing the daily operations, program enhancements, and capital projects and improvements. These include: a new Plantation Key Courthouse and Jail Complex, a new Marathon Library, improvements of Rowell’s Waterfront Park in Key Largo; operations at the newly renovated Bernstein Park on Stock Island; road alignment project at Higgs Beach Park in Key West; canal debris removal and restoration Countywide; land acquisition; and maintenance and upgrades to County roads and bridges.

The County has worked diligently to secure state and federal grant funding to assist with all aspects of hurricane recovery.  Monroe County will receive $36 million for emergency work and $29-50 million in permanent work from FEMA. Monroe County, and its municipalities, also will receive $162 million in other federal assistance for housing recovery, mitigation efforts and hurricane marine debris cleanup. In state assistance, Monroe received $5.9 million for an Emergency Operations Center and $15 million in funding to the Florida Keys for affordable housing construction.

The proposed budget includes a 2.1 percent cost of living adjustment (COLA), based on the Consumer Price Index, for County employees. It does not include any performance-based merit increases.

The BOCC will hold a Special Budget Meeting on July 31 from 10 a.m. to 4 p.m. at the Harvey Government Center in Key West. At that meeting the BOCC will certify the proposed millage rate to the property appraiser, which is the rate that goes out on the tax bill (TRIM).

“We will continue to be vigilant in looking for cost savings in the operating budget and applying for grants and other funding to help with Irma recovery,” Gastesi said. “We have been able to absorb our Irma expenses while continuing to provide high quality public service, programs and services that are important to our residents and investing in public infrastructure projects that are protective of our natural resources, public safety and overall resilience.”

More information is available at www.monroecounty-fl.gov/budgetandfinance. 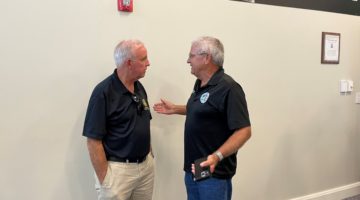