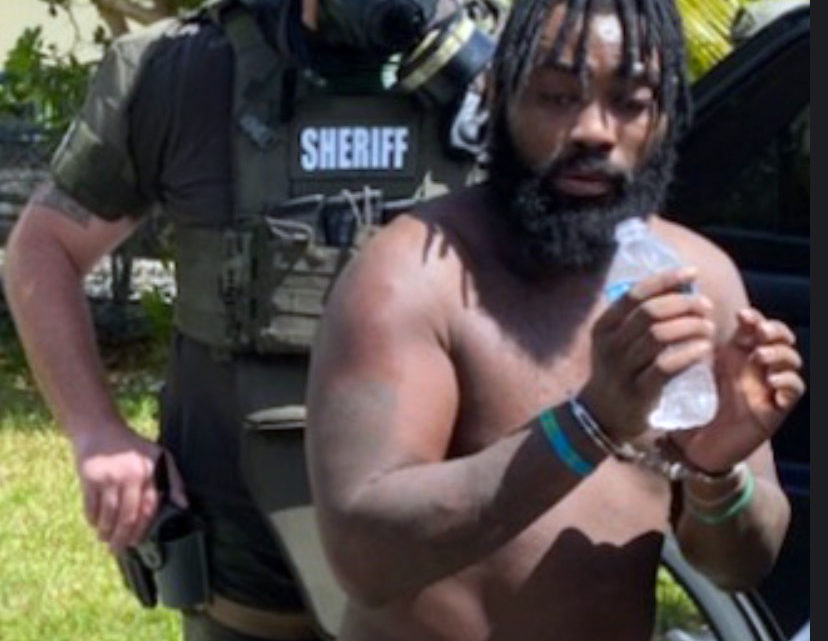 An armed 35-year-old Big Pine Key man with warrants for his arrest in two other states was taken into custody without injuries after a seven-hour standoff with the Sheriff’s Office on Friday.

“I want to thank the members of the Sheriff’s Office for their exemplary and professional work in this incident as it was brought to an end without any injuries to the public, law enforcement, or the suspect,” said Sheriff Rick Ramsay. “I also want to thank our Key West Police Department partners who sent members of their Special Response Team, K9 units and Detectives.”

Vincent Alexander Crossland was charged with fleeing and eluding and possession of a firearm by a convicted felon.

His girlfriend, Shalandra Cemone Williams, 39, of Big Pine Key, was charged with obstruction.

More charges may be pending as the investigation is ongoing.

The incident began at approximately 8 a.m. when the Sheriff’s Office received information that a wanted suspect (Crossland) armed with a gun and carrying narcotics was likely in the Florida Keys. The suspect vehicle was spotted northbound on U.S. 1 at Mile Marker 28. Crossland fled from Deputies, reaching speeds of 80 mph.

Deputies observed Crossland throw something out of the window while he was fleeing between South Pine and North Pine channels. A handgun owned by Williams was later recovered on the side of U.S. 1.

Crossland continued northbound, then turned into the Avenues area of Big Pine Key. He stopped at Williams’ residence on Avenue I. Deputies observed him drop and pick up a handgun before running into the residence.

The Sheriff’s Office set up a perimeter. The SWAT Team and Crisis Negotiators were called to the scene. Williams exited the house and initially lied and said she had no information on Crossland, before finally admitting that he entered the house and told her to leave.

Deputies evacuated nearby homes in the area.

Crisis Negotiators attempted to make contact with Crossland via cell phone, a bull horn, a PA system, a drone, and a throw phone but were not successful.

After several hours, SWAT Team members deployed chemical agents into the home, but those attempts were also not successful.

He was taken into custody at approximately 3:30 p.m. without further incident.

Crossland and Williams were taken to jail.

Crossland had out-of-state warrants for his arrest on charges of possession of a firearm by a convicted felon and assault.