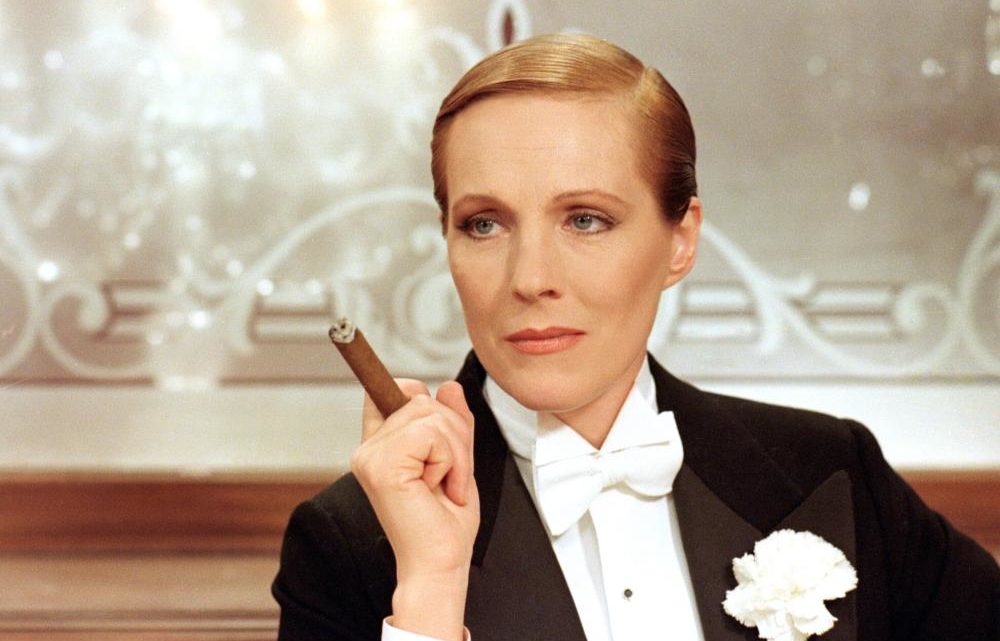 Blake Edwards’ “Victor / Victoria” (1982) is the splashy colorful and fun film that is highly entertaining, chock full of rousing musical numbers. Better yet, it is a genuine madcap comedy, with a dose of pointed social commentary, as only “The Pink Panther” helmsman can make.

[Victor//Victoria is playing at the Tropic all week. Check www.tropiccinema.com for schedule.]

Victoria Grant (Julie Andrews) is a singer down on her luck, reduced to tricking waiters for meals using roaches. She meets Toddy (Robert Preston), a jaded drag performer, who has the sudden idea that Victoria can be successful by pretending to be a man who pretends to be a woman. Toddy reasons that the audience will be so astounded that riches will fall at her feet. Victoria cuts her hair and gives herself a slightly severe androgynous appearance, resembling David Bowie with golden orange hair.

Victoria known as Victor is an absolute hit in the Paris clubs.

The singer catches the eye of suave businessman King Marchand (James Garner), who is very confused when it is revealed that the seductive singer is apparently a man.

The film is full of sight gags and very comical misunderstandings that are sure to melt even the most stern of hearts.

Comedian Graham Stark as a supercilious and flabbergasted waiter is laugh out loud funny as he perspires and rolls his eyes, as is James Garner as he encounters numerous awkwardnesses and vexations.

Cinematically, the film is a case study in color theory with its luxurious parade of saturated hues. Electric contrasts pour across the screen with the richness of paint. There is painstaking detail here and many of the scenes are framed with ornate flair much like an Art Deco cameo.

“Victor / Victoria” is a true time capsule full of motion, humor, festivity and freedom. It possesses a fluid sense of joy and spirit. While its inclusive, genderless message is very evident, the film stands most bravely as art for art’s sake and the bon mots are both silly and pointed in absolute celebration.