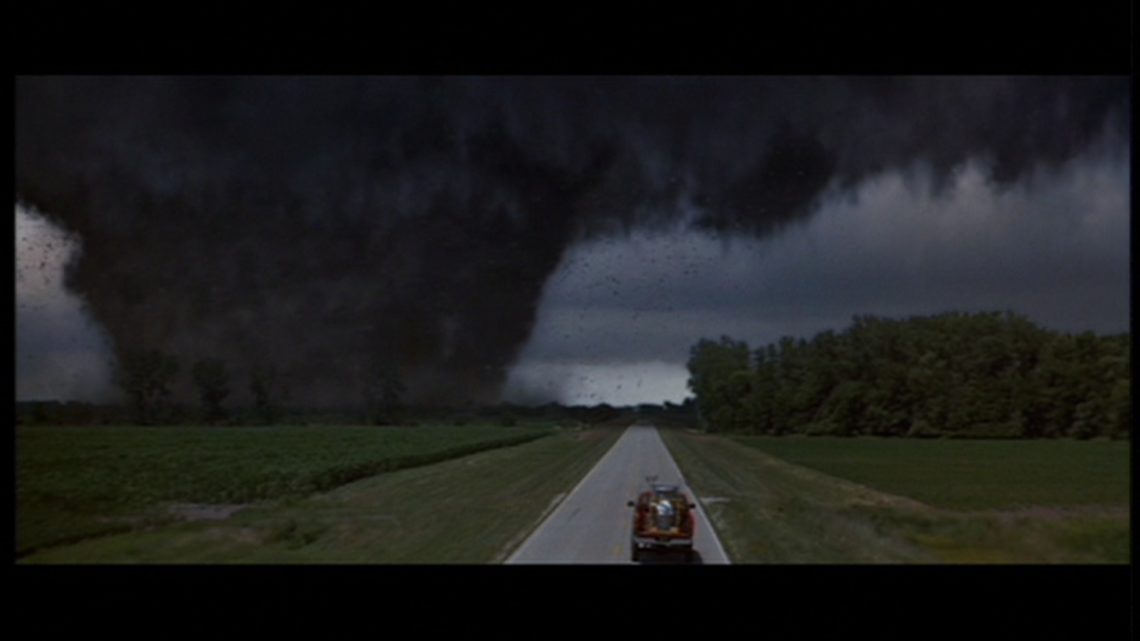 For the retro minded, “Twister” is here from 1996, starring Bill Paxton and Helen Hunt, and directed by Jan de Bont (Speed). Though kitschy with camp and high melodrama, the film generates apprehension, and is fast paced with vivid special effects by Industrial Light and Magic.

Bill (Paxton) is a storm chaser turned weatherman who just happens to meet with his ex Jo (Hunt) who is a star tornado expert. Suddenly, she gets a weather alert that a monster tornado is headed her way. Bill decides to accompany her, reasoning that it might be an historic storm and if not at least he can get divorce papers signed.

Produced by Steven Spielberg, the film has Spielberg’s mark all over it. There is the grim musical foreshadowing before the tornado. The tornados are depicted as black impervious monsters, malevolent and cold, very much like the Great White in “Jaws” (1974) while the camera shots of those screaming for their very survival closely resemble both “Jaws” and “Poltergeist” (1982) another Spielberg produced film.

Frightening it is to see the storm pursue Jo, as if it had an intelligence or a personal agenda. Shards of metal become as scary as the claws from the glove of Freddy Krueger. As if to prove this point, a tornado attacks a drive-in movie theater that is showing Kubrick’s “The Shining.” An ax is pummeling the door right before the tornado rips the movie screen to shreds. Jack Nicholson’s face, a wild Halloween pumpkin, hangs in the night sky in one of the best scenes.

If watching men and cows being carried away into the great beyond isn’t your thing, cinephiles can delight in an early performance by Philip Seymour Hoffman as an assistant in hyperdrive who cackles and wails like a banshee whenever he sees a storm on the horizon. Though Hoffman is a cartoon here, he is charismatic and memorable, and fills the screen.

While the impressionable among us (including children) might cringe from the hurling bodies, houses, trucks and metal projectiles, “Twister” is a suspenseful time capsule from an era when one the scariest things we could think of was only a violent tornado across a field. The immediate dangers portrayed on screen, in contrast to today’s free floating anxieties of wars and sudden viruses, feel quaint by comparison.