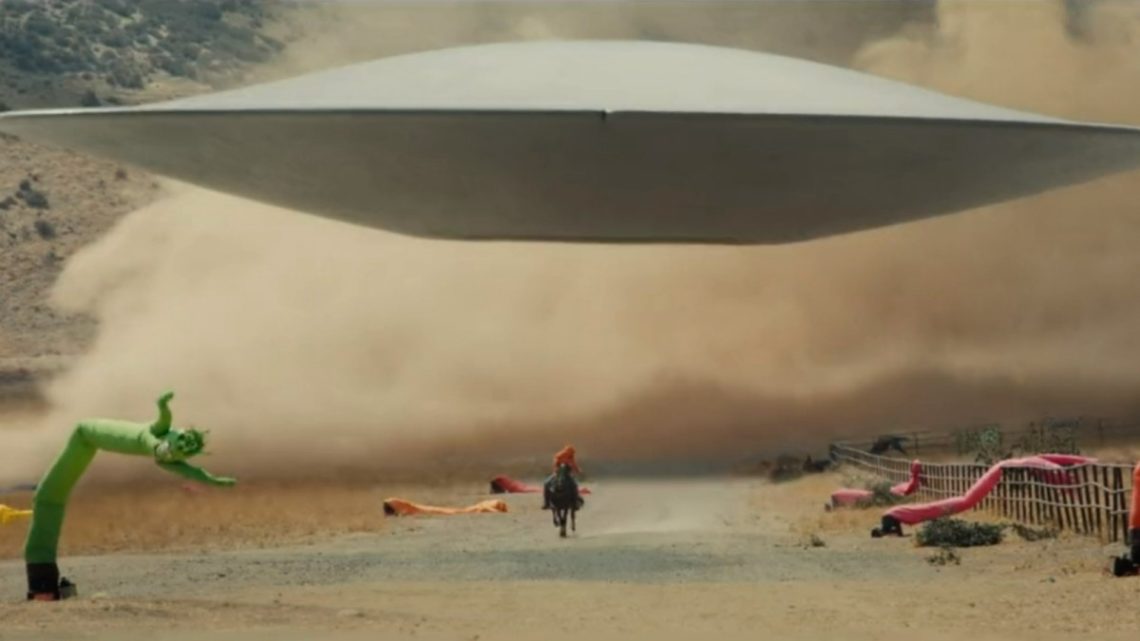 Jordan Peele’s new film “Nope” is more of a meditation than an outright chiller, but its atmosphere and suspense are spot-on and compelling. The film with wondrous echoes of The Twilight Zone definitely keeps you guessing.

The first scene shows a wrecked living room. A young chimp is covered in blood. A listless woman is unconscious. A child’s shoe lies upright, breaking the laws of physics. This one scene is enthralling.

Then there is a ranch. Strange projectiles fall from the sky. A man falls from his horse, near death.

OJ (Daniel Kaluuya) runs a stunt horse ranch. He is soft spoken and unassuming. People misunderstand him or tend to talk over him because of his shy and quiet mannerisms. OJ is hired for a TV show and then fired for his volatile horse and his lack of charisma.

His sister Emerald (Keke Palmer) moves in with him.

Then OJ hears odd spooky sounds in the sky with periodic power surges. A cloud does not move.

Thinking of fame or at least informing others, Emerald buys camera equipment and the two enlist a nosy video tech Angel (Brandan Perea) who is excited to see as much scary footage as he can.

The film works best with its atmospheric touches. Camera flashes are charged with an almost supernatural power to blight or intrude. A Wild West desert attraction is static and rundown, its carnival aura now lost. A camera and a motorcycle helmet both have circles within them speaking of aliens and watchers from the sky.

The most impactful scenes feature a chimp who was on a TV sitcom who tragically gets startled by a popping noise, flies into a rage and murders the stars of the show. These two scenes alone have all of the power of a Twilight Zone morality play, speaking of our hapless desire to communicate with other species. The sight of the simian reaching out for a fist bump after the murder is both horrifying and poignant. As it satirizes “E.T. and “Close Encounters of the Third Kind,” it is also comical.

Steven Yeun (Minari) is Ricky, a UFO cultist who witnessed the murders by the homicidal chimp back in 1993. Blinded by his own ego, he is beset by a neurosis of being more famous than he actually is.

The film does a fine job of building apprehension. During one tense scene, both a praying mantis and UFO enthusiasts are seen as eerie entities on the level of the work of Diane Arbus, while the alien interiors recall the impressionist films of Stan Brakage, all screams and fire. The frostily terrifying chimp scenes again, are reminiscent of the painter Donald Roller Wilson.

The film only lets us down slightly when the reveal comes. The extraterrestrial event speaks of Salvador Dali’s abstract work along with Maxfield Parrish—a huge white balloon form resembles lady’s underwear or a flower of belladonna.

The climax is sudden, swift and understated. It is somewhat hard to believe that a huge ship of evil intent can be matched with such sundry materials.

Perhaps that is Jordan Peele’s point: By night our terrors take the form of overwhelming juggernauts only to be reduced to so much plastic floating in the breeze by day, a nod to plastic waste and global warming.

The real monsters are the human ego and primal instincts: a TV director dismissing an animal trainer who happens to be black, a self-made evangelist wanting to be embraced by the murderous metal arcs of a UFO, and a malevolent male chimpanzee all ready for a birthday party licking his bloody chops for a bite of human cake.