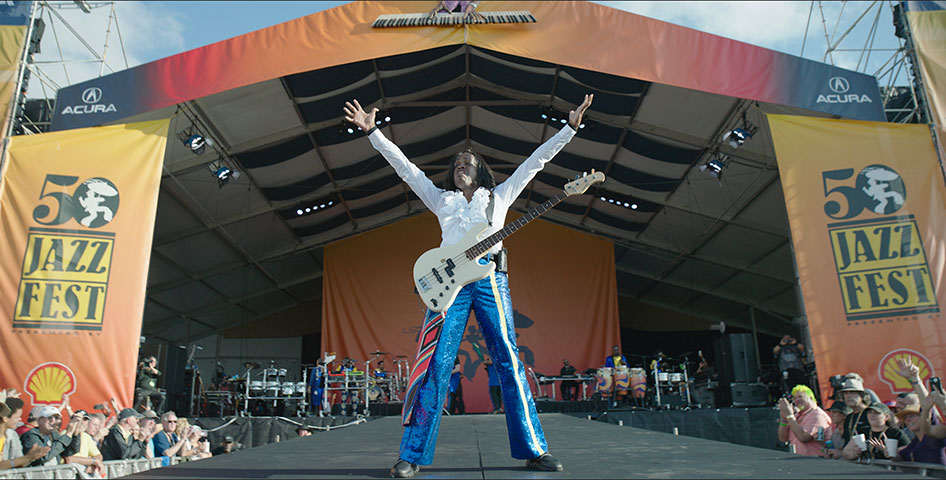 Directors Frank Marshall and Ryan Suffern give a rousing history of the New Orleans Jazz and Heritage Festival in the film “Jazzfest: A New Orleans Story.” The film is slickly produced by Jimmy Buffett and delivers many colorful portraits of festival headliners.

The festival was founded by George Wein and Quint Davis who both were driven to highlight the musical culture of Louisiana in all its forms to people far and wide. Right from the start there were some officials that gave outright nos. It was 1962 and the Jim Crow laws were in effect. Whites could not share a stage with Black musicians. Wein remained undaunted.

In 1970, New Orleans had its first Jazzfest, exclusively highlighting bands only from Louisiana. The first featured Mahalia Jackson.

This film pays special attention to the 50 year anniversary of the festival in 2019.

For the five decade celebration, Earth Wind & Fire is present along with The Marsalis Family, Katy Perry, Al Green, Pitbull, Jimmy Buffett and many gospel groups.

The festival was conceived in an organic way to encourage a diverse sampling of musical styles and genres, from Cajun and Zydeco to Hip-Hop and beyond. Along with the music, the food is also central to the festival. The music and the food (emphasizing crawfish stuffed beignets) combine to give the festival-goer a full comprehensive experience of New Orleans.

The festival was especially instrumental in bringing the community together during the devastation of Katrina. Many recall being brought to tears during a particular Springsteen song about a shuttered town which was delivered in the manner of a prayer.

The film also defines second line music as celebrations of life and death together, as well as Cajun— rhythmic dance music-and Zydeco.

As if to underscore the good vibration intent of the festival, Jimmy Buffett has the last tune with a cover of the Rolling Stones’ “You Can’t Always Get What You Want.”

Jazzfest: The New Orleans Story” is a raucous roux of musicology and mayhem, seasoned with tears. One can sleep well knowing that The New Orleans Jazz and Heritage Festival still lives on to this day.