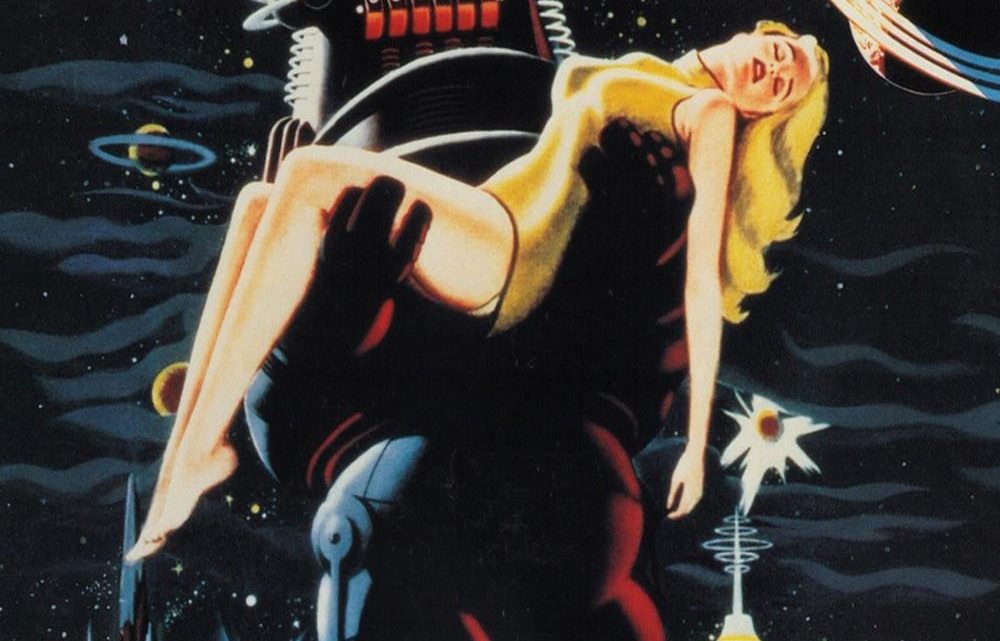 [Showing at the Tropic Cinema the weekend of July 22-24. For showtimes and tickets, go to https://www.tropiccinema.com/movie/classics-at-the-tropic-forbidden-planet/]

“Forbidden Planet” (1956) sneaks up on you with a touch of horror despite its obvious camp. The credits alone are enjoyably Pop Art , illustrating graphic allure in full color. This is true nostalgic entertainment and the film is full of vivid kitsch. It is loosely based on The Tempest.

A spacecraft is sent on a mission to monitor a planet far from earth.

Commander John (Leslie Nielsen) discovers something very strange: a sparse rocky landscape with a teal sky. John finds a vexed solitary man by the name of Morbius in a black robe (Walter Pidgeon) accompanied by his blonde daughter (Anne Francis) and a robot.

John doesn’t know what to think.

Morbius tells the commander that a horrible monstrous force has killed off most of the inhabitants except for himself and his daughter, who are oddly immune from the monster’s harm. Most of the victims were dismembered, torn limb from limb. Morbius is friendly enough but his matter of factness is very off putting to the visiting crew.

Morbius lets it slip that he is keeper of Krill knowledge from a superior race and consequently there is very little that he does not know. John tells him he is setting himself up for peril, but he brushes John aside.

The unusual visuals combined with eerie electronic music cause the eye to go into a weird watchful hypnosis and the effect is almost like a waking dream. Despite the campiness, the quiet scenes possess a haunting quality, as in a painting by De Chirico.

Though it takes several minutes for apprehension to build, the action is steady enough. One thrilling moment features a demon captured by a laser gun. The animation is first rate, one part Disney, one part Warhol, with hints of Max Fleischer. The monster is a joy to watch.

I would not call this film a thriller, but it is entertaining nonetheless. There is a quirky kind of anguish in the animated ID monster, very similar to “King Kong”.

If old school sci fi is your weakness, then you cannot do better than “Forbidden Planet,” a curious cautionary tale with bright colors. The barren landscape creates an odd melancholy of watching and waiting.

Previous post Officials: Starvation threat not over for Florida manatees