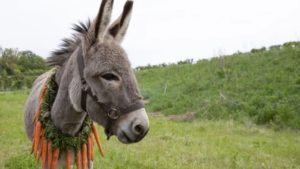 From Polish Surrealist Jerzy Skolimowski (Deep End), comes an interpretation of “Au Hasard Balthazar” (1966) by Robert Bresson. An incarnation of Balthazar’s adventures, “EO” is a mesmerizing tour de force that compels as it draws tears from the eyes.

EO is a circus animal, a donkey who moves with tranquility and grace. His big round eyes are like two globes, taking the entire world within. EO often sees his environment colored blood red as if to express to us that humankind is engaged in doing selfish and murderous acts.

When we first see our four-hoofed friend, he is taken from the circus that was managed by a harsh and violent man facing bankruptcy. EO is brought to a farm where he munches on carrots. He escapes, but finds himself in a forest with wolves. frighteningly, hunters are hunting. Scared, he trots away.

He comes into a field. Fat and aggressive men are engaged in a soccer match. EO is christened as the winning team’s mascot. This portion of the film is festive but it also contains an air of menace and unease. Floods of strange liquids confront EO: beer. Followed by sinister curls of cigarette smoke. EO exits. A rival soccer team ransacks the building and brutally attacks the donkey. EO is taken to a hospital.

EO lives as a testament to continuation and moving forward regardless of happenstance. Through physical burdens, menial labor, as a witness to gory murders and religious rituals, EO trots on.

The actor Lorenzo Zurzolo plays an eccentric drifter Vito, in love with his countess mother (Isabelle Huppert) in a very odd Oedipal sequence. EO browses idly in the yard.

The movement of this film is perfect with not a single frame disposable or wasted. As it rolls on, one receives the truth: EO may seem dispassionate and gentle (or is he?) but in his very persistence to continue, he is more human than the majority of men in the film, the mental equivalent of base monsters.

Through pettiness and predicaments, through shrieks of bombast and blood, EO continues forth.

This is no Disney film. The thrumming orchestral score recalls the haunt of Bernard Hermann while the strobing off kilter perspectives coupled with forbidding rural scenes recall Lars von Trier and Stanley Kubrick. In some ways, this is “My Donkey, My Lover & I” (2020) as if seen by Gaspar Noe’s strobe effects and carnal claustrophobia.

Jerzy Skolimowski is to be commended here for highlighting our base desire to manipulate the animal world. In true Surrealist fashion, Skolimowski at 84 is still writhing against the status quo.

EO is truly one of a kind, disarmingly gutsy, fluid and beautiful. It will enthrall your heart just as it rips it out, wrenched and bloody on the theater floor.