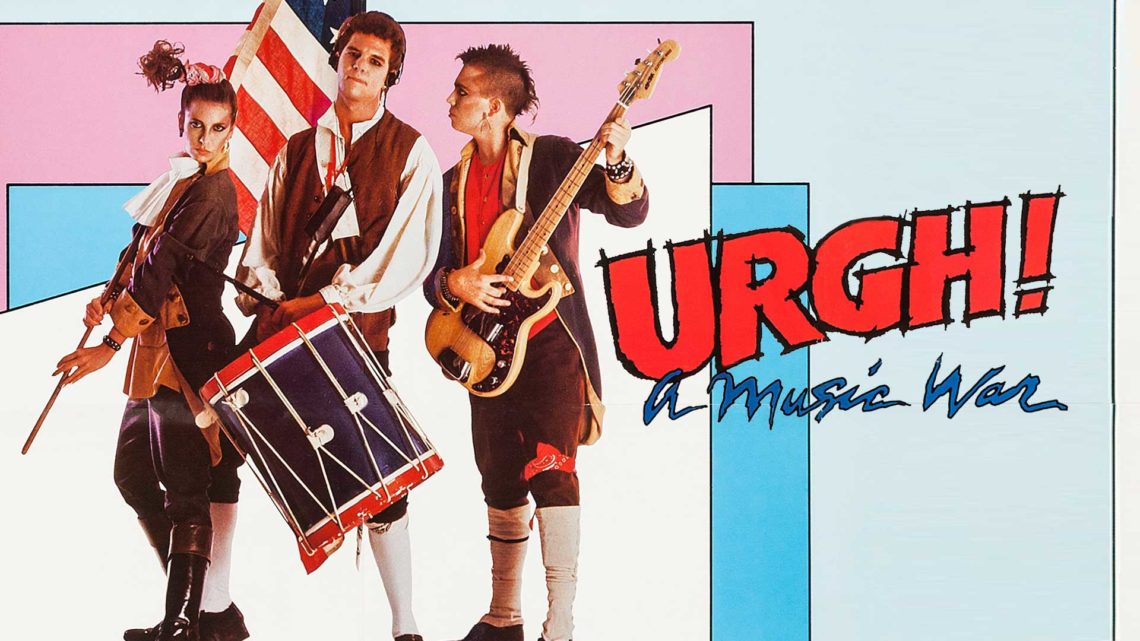 The 1980s were the Reagan years. I was in high school. I was taking my asthma pills on what seemed like a daily basis and I was surrounded by vibrating neon colors and MTV. I was also engaged in protesting against the proliferation of nuclear weapons as a member of Greenpeace.

For all of my naïveté, political events were very much in limbo. Reagan floated on TV with his black hair that was grooved like a record. The Russian government was formidable and scary to me (as it is once again) and I watched music videos which were watercolors for my eyes.

Those anxious years are here once more in “Urgh! A Music War” directed by Derek Burbidge. This 1982 concert film has a raw immediacy, given that the show has the appearance of being largely unedited and one is given the perspective of being placed in the audience. The film is composed of 30 different groups, the majority being New Wave or Punk.

First off, Sting of The Police has an exuberant number as he flails at his guitar with cool swagger, his spiked blonde mane shining in the glare.

While some of the bands sound much the same with their dark discordant rhythms, the shots of the massive crowds, screaming, angry, and flashing their middle fingers, are irresistible and absolutely compelling.

The standouts in the film are Jello Biafra of The Dead Kennedys who rolls at the crowd like a barrel filled with dynamite, wearing plastic gloves.

There is Klaus Nomi with his wondrous falsetto voice who resembles someone like Joel Grey in a 23rd century “Cabaret,” part android puppet, part man.

Gary Numan is weird and wonderful cruising and crooning in a solid black motorized wheelchair in a melancholy lament about surviving a car crash.

A band called Pere Ubu gives a very thoughtful and entertaining number. The lead singer shows himself with great difficulty presumably attempting to dance, yet he cannot manage. The lyrics delivered in a high pitched chirp merge into what is a meditation on miscommunication and nonsense: a punk version of Laurel and Hardy.

While the two hour running time is challenging here given the intensity of the music produced, rests are provided by the feel good bands The Go-Gos and UB40 who feel tame and tepid against the sacrilegious pipings of Skafish, who associate religious genuflections with masturbatory erections.

While it is possible that your ears can tune out, with some of the hyper-manic rhythms and dark strums, what you are left with in seeing “Urgh! A Music War” is a nostalgia for sonic ager. There is a quaint feeling in watching the “slam dancing” of some forty years ago. Yes, the music and audience in large part was angry, but Punk stands for rebellion simply for the sake of rebellion and therein lies its energy and its power.