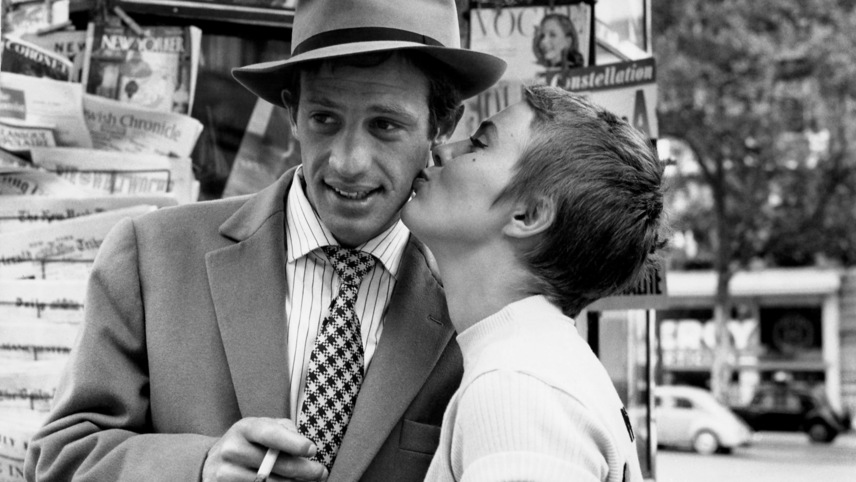 Jean-Luc Godard’s masterful “Breathless” is back on the big screen and it is cause for celebration. The film is slick, melancholy and glamorous. A kind of noir version of Camus laced with Romeo and Juliet, it is sumptuous, bold and still holds up today.

Michel (Jean Paul Belmondo) is a hardened criminal who looks for women to shield him. On the street, Michel runs into Patricia (Jean Seberg) who acts aloof but she is nonetheless attracted to his wolfish face and reckless attitude. Michel is a fatalist.

Neither Patricia or Michel let on that they are attracted to one another. Michel is a rogue and Patricia is stand offish. Patricia wants to ease into life and Michel thinks of death. Yet as much as she plays coy, Patricia is fascinated by Michel’s self-destruction.

The imagery is rich and larger than life and every pair of sunglasses reflects Paris within.

Seberg is perfect as the inquisitive ingénue who is attracted to dark sides, while Belmondo is terrific as the loutish cynic who does not care about any situation one way or the other. One-part philosophy and one-part crime story with nostalgic details and glossy closeups, the film is a wonderful time capsule of 1960 Paris.

Michel is a magnetic combination of danger and apathy and Patricia resembles a silver tulip, her hair short and streamlined, Seberg is a cinematic waif for the French New Wave. Her style recalls Mia Farrow in “ Rosemary’s Baby” and Warhol Superstar Edie Sedgwick.

While the story at first touches on philosophy and morals or the lack thereof, it drifts into Highsmith territory with scarcely a ponderous moment.

The final scene of Michel in the street walking as an existential rag doll is iconic and full of visual poetry.

This film is a treasure and a fine example of its type. “Breathless” is full of motion and energy as well as glamour. Deceptively simple, the film has a quirkiness unique to itself. This is Godard’s first film and one of his best. Write Ian at ianfree11@yahoo.com