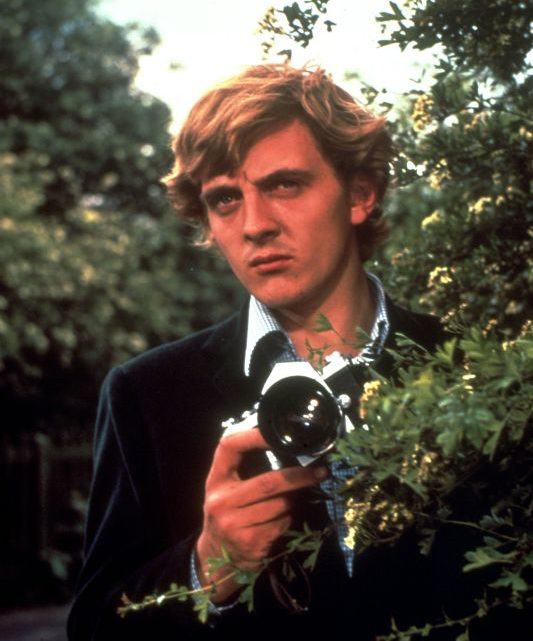 The 1966 classic “Blowup” has arrived directed by Michelangelo Antonioni. The film is a wonderful time capsule that unfolds before the eye in luscious visuals.

In much the same way as the later film “The Passenger” (1975), “Blowup” is an example par excellence of the existential in cinema, nothing less than a combination of Hitchcock and Camus.

Photographer Thomas (David Hemmings) is invariably late for photo shoots. He drives a Rolls Royce down desolate London streets, in the hopes of finding new photo commissions or dates, far from romantic.

Thomas spends his time in his studio romping on the sofa with blonde blue-eyed girls or else he is snapping his camera with the mania of a fetish. Thomas dances wildly with his silver camera, often on one foot. His movements have the strangeness of something ancient or pagan. Thomas swings in the air with loose and unpredictable gestures. When he takes a picture of a person, he never asks permission.

One day Thomas sees a couple making out in an open field. He snaps a series of pictures like one possessed. Jane (Vanessa Redgrave) is horrified at having her picture taken during intimate moments and demands the film. Thomas refuses.

Later, Thomas develops the film and finds something that transfixes him. He is stupefied. Far off, in the bushes there is a man with a gun. He grows more and more compelled as one in the throes of an addiction, but he also becomes increasingly anxious.

The film builds gradually in increments reaching rhythms of sadness and tension. Eerie and strange it is to see Thomas having no effect on his surroundings whatsoever. When Thomas rolls on the studio floor with two women he resembles a blonde pinball, rolling back and forth, only to suddenly stagger forward into another room as if nothing occurred.

On his investigative errands, Thomas enters rooms filled with people. The crowds are silent and blank mannequins. Frequently Thomas is depicted being overwhelmed by masses of people, then stunned by silence in the next moment.

Thomas tries to tell his friend Ron (Peter Bowles) about the discovery, but Ron is stoned and incoherent.

“Blowup” has a moody and haunting charisma. The last fifteen minutes when Thomas revisits the mysterious park is a small masterpiece in silent film, and the slow lugubrious quality reminds us of “Blue Velvet” (1986) when Jeffrey discovers a severed ear.

The film boasts a production in defiance of the infamous Hollywood Production Code for its explicit scenes in its time, as well as a musical performance by the Yardbirds along with rock legends Jimmy Page and Jeff Beck.

One is left with a troubling sense of disquiet and unrest. Is Thomas genuinely concerned about the shooter in the woods or does he ultimately treat all circumstances like a novel misadventure?