The Birth of Bum Farto— The Musical: Pamela Connolly Revives a Mystery in a True Crime Musical Comedy

The Birth of Bum Farto— The Musical: Pamela Connolly Revives a Mystery in a True Crime Musical Comedy 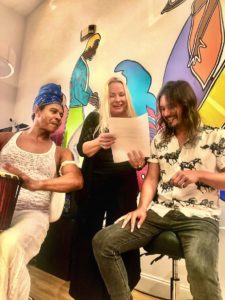 Creator and director Pamela Connolly goes over notes with music composer Dan Krysa and dancer Master Braz Dos Santos for Pasión Project’s “Bum Farto -The Musical,” a hilarious true crime musical that tells the tale of an infamous fire chief who tempted fate and federal agents who set him up in a 1975 Key West drug sting known as Operation Conch. The smokin’ hot show opens at the San Carlos Institute Theater in Old Town, Key West on Thursday, October 13 through October 27. Bumfartothemusical. Image by Cricket Desmarais.

When Pamela Connolly saw a “Where’s Bum Farto?” tee-shirt in a fisherman’s café in late 2020, she didn’t know it would be the seed that would grow into the true crime musical comedy “Bum Farto— The Musical,”  featuring one of Key West’s most infamous characters and more than two-dozen song-and-dance numbers in a two-week run from October 13 – October 27 at San Carlos Institute.

“I became enthralled by the whole story – the mystery, the lawlessness, and the messiness of it,” says Connolly, the show’s producer and director.  “But I was particularly drawn to the people – the pool of truly fascinating folks who were basically just doing what was considered perfectly acceptable in those times. I was tickled to hear about the misguided efforts of certain law enforcement officers – bumbling their way through a poorly executed sting – and began to weave a musical that was part true crime, part fantasy.

After sketching a rough outline about the fire chief and his 1975 arrest by federal agents during the Operation Conch drug, conversations with her daughter’s partner Dan Krysa, an award-winning composer and musician, sparked a show-opening song called “Ford Galaxy” – a tribute to the car Farto worshipped, complete with the Santerían shrine glued to the hood. There was no turning back.

“From creation to performance, it was ver­­­­y fast, less than a year. It just seemed to write itself,” she says. “I think a lot of that was because we had no plan. There was no pressure. We just did this for fun, which is how a lot of the best things happen.”

Connolly’s credits and talents are many. The professional psychologist has authored 7 books, acted in full-feature films and TV series since 1970, dances in festivals, and now runs her Pasion Studio for dance in downtown Key West— all talents she lends to the creation and production of her musical.  She is also a comedian.

“The lyrics I’m most proud of in the entire show are ‘surely there’s just one bag of blow in this whole goddamn archipelago?’”

A snippet of true Key West history, the show is a swift 90-minute production that’s raucous, sensual, and at times, tender. It features an ensemble of 24— 18 local and 6 from Connolly’s and Krysa’a professional dance and music communities across the globe, including Broadway’s Aaron LaVigne, the Jesus Christ Superstar lead who trades his crown of thorns for a tourniquet and needles to play Brutus, the heroin-addicted snitch. Fiction blends with fact as the story unfolds to showcase a multi-dimensionality of the characters you first thought you were rooting for or against, revealing the “One Human Family” live-and-let-live mentality that Key West is well known for.

“Out of compassion for family members who still live here, I was determined to tell only an uplifting, generous tale,” Says Connolly.  “It’s not a moral tale but rather a glorious celebration of an infamous but iconic man whose fate and place in history was linked to so many others.”

With a rollicking score of more than two dozen song-and-dance numbers, vibrant lighting design, and historic images and news clippings projected against sparse but colorful sets, Connolly brings the diverse world of Key West in the mid-seventies to life.

The smokin’ hot show opens on October 13 with a sizzling 70s Opening Night Gala featuring pre-show cocktails, hors d’oeuvres, and groovy tunes to benefit the Key West Firehouse Museum, and runs through October 27. Tickets start at $35 up to $235 for top-tier balcony seats featuring a private VIP bar. The popular show is expected to sell out so get your hot little hands on the best seats now at bumfartothemusical.com. Sponsored in part by Key West Art & Historical Society.