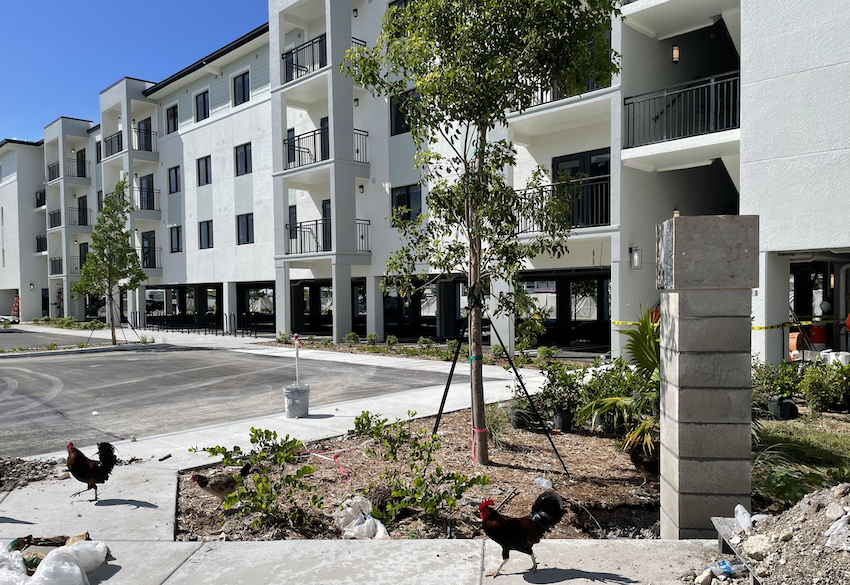 With the first of 280 units at Wreckers Cay on Stock Island set to receive their initial residents on September 15, Monroe County, and management at Wreckers Cay, despite some good intentions, have let us down. The result? Expect more car traffic through the Triangle. The saying goes that we get the transportation behavior we build for. So, if we construct a housing development with ample and covered car parking that treats bicycles as little more than a cheap afterthought, how can we expect people to invest in decent bikes that can make the 5-mile trek to downtown and back every day?

Research shows an optimal time to get people to try alternatives to driving are when they move into a new home. Planning officials and the developer should be laying out the red carpet for bicycles, e-bikes, and e-scooters to show residents that bicycling is a favored method of getting around. Instead, they’ve installed outdated and hard-to-use bicycle parking outside and exposed to the elements. Proper industry standard, resident bicycle parking should be placed under the building, protected from the weather. It should include security cages surrounding the bikes, especially for higher end bicycles. And ideally there should be electric outlets at the bike parking for recharging e-bikes and e-scooters. Rather, the entirety of the space under the first to be occupied buildings are striped for and include curb stops for only car parking. It’s so mainland, car-centric Florida values that don’t belong on our little islands.

If we hope that at least some of these new 600 or so residents will use a bike instead of driving a car across the Cheryl H. Cates Memorial Bridge to Key West for work, shopping and play we must treat bicycles as a priority and that starts with good parking at the home end. The developer and County still have some time to get this right. 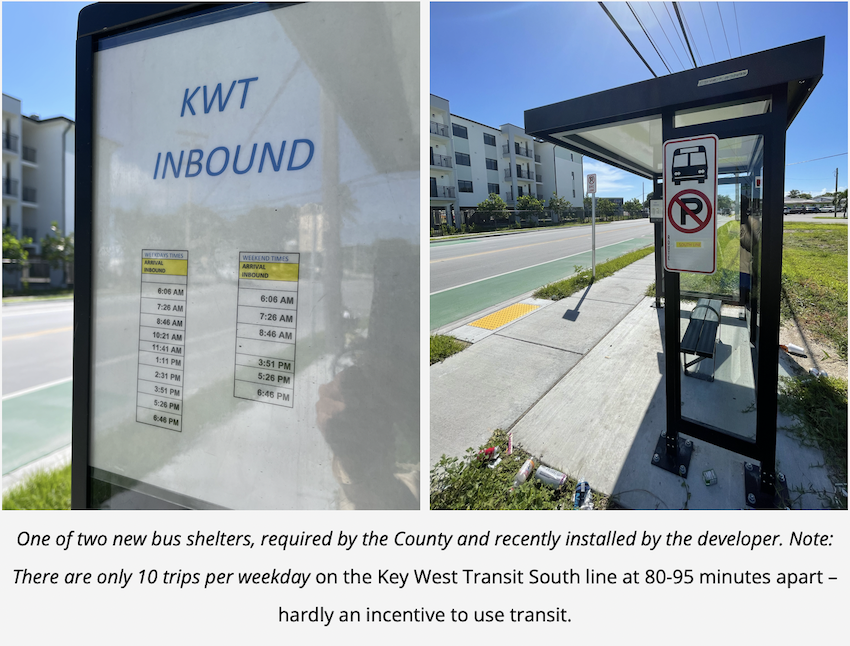 The 280 homes at Wreckers Cay start occupancy in less than two weeks. That’s just the start of what will eventually be 667 new units coming online on Stock Island. There’s a lot of concern about traffic, especially along U.S. 1 because visitor traffic is increasing too. Public transit between the islands is awful and we don’t know when Key West Transit’s new on-demand transit will start or when it does if it will prove adequate to the task of being frequent and reliable enough for people to count on it as a commuting option. And while the County is discussing their own on-demand transit service with a private vendor, it is only in a conceptual phase. So, with the County and City behind the eight-ball on providing transit options in time, we really need some people to use their bikes.

To the Historic Seaport or the middle of Duval Street it is a 4.7-mile, 25-minute bike trip via the Promenade along N. Roosevelt Boulevard or a 5.3 mile, 30-minute bike ride via the safer Crosstown Greenway route through the middle of town. That’s doable for many. It could be done a little quicker and easier by electric bike, likely matching the 13 – 19 minutes Google Maps says it takes a car to go to the same places. And with e-bikes and e-scooters perhaps even more people would consider doing so.

A couple months ago we examined 10 Things to Make It Safer to Bike from Stock Island to Key West. While we discussed multiple needed infrastructure fixes along the routes, educating drivers to slow down, discounting e-bikes for new residents and putting more regular bike parking downtown, #1 on the list was convenient, covered and secure bicycle parking at the new Stock Island housing developments. That’s because people want a dependable ride. Leaving a bike outside and exposing it to the elements makes it more likely to break down or even get stolen. A well taken care of bike is more likely to get ridden. 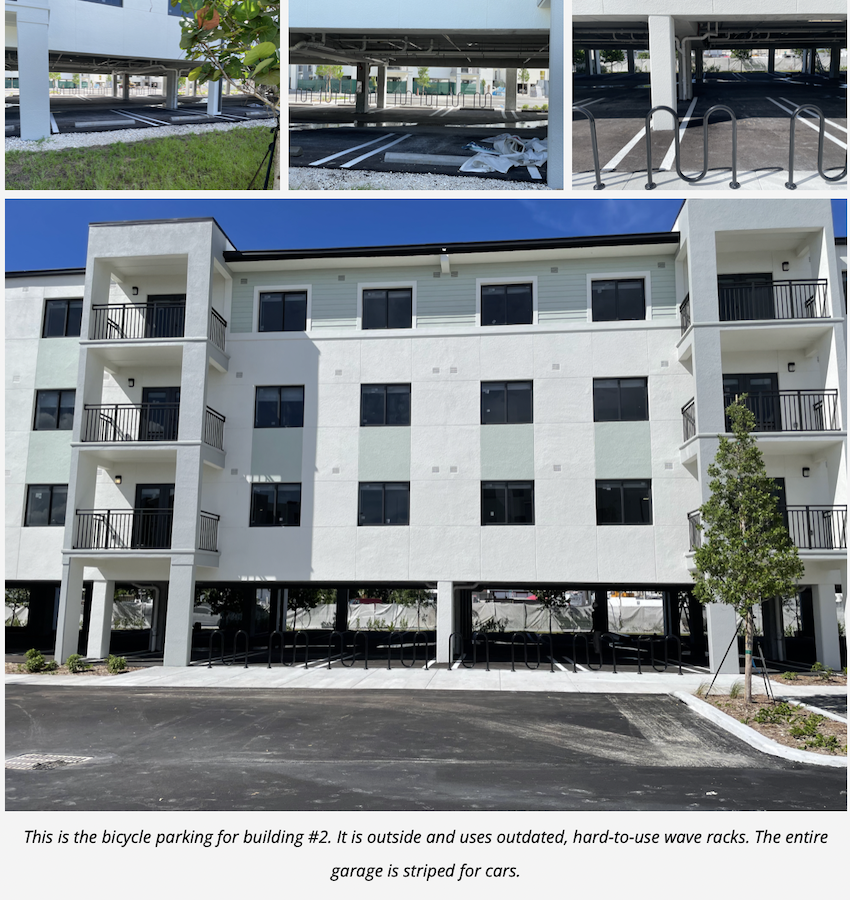 According to the site plan for the 280 units there are 400 car parking spaces (252 in garages under the units and 148 in surface lots) and 102 surface scooter spaces. As bicycle parking isn’t shown on this version of the plan, Emily Schemper, Senior Director of Planning & Environmental Services for Monroe County told us there will be space for parking 328 bicycles on the property. On its face that seems like a lot of bicycle parking. And the project’s manager is said to be enthusiastic about what they are doing for bicycles. But these pictures show the bicycle parking recently installed in front of building #2, which is slated to have 35 units and 34 car parking spaces under the garage will have wave style bike racks out front. Ms. Schemper tells us this particular wave rack is supposed to accommodate 24 bikes. We’re doubtful.

Bicycle planners in places that are rated high for bicycle friendliness have for a couple decades now advised against installing these kind of wave racks. Experts don’t like comb or schoolyard racks either. The industry standard is the Inverted U rack which is a simple, sturdy design with each loop compactly providing parking for two bikes. The style is preferred because it can support a bike at two points to prevent it from falling over. They are easy to lock a bike to since the rack is at the center of the bike. When used side by side in a corral a single car parking space can easily hold 10 to 12 bicycles. The Association of Pedestrian and Bicycle Professionals (APBP) Essentials of Bike Parking: Selecting and Installing Bicycle Parking That Works guide says “Racks to Avoid” include the Wave – also called undulating or serpentine and Schoolyard – also called comb or grid racks and recommends the Inverted U – also called staple or loop rack.

Skeptical of what people in other cities or professional associations say? Then here’s what Key West’s own Ryan Stachurski, the City’s Transportation Coordinator said:

“It’s unfortunate that even with new construction, some make the mistake to install wave racks or comb racks. I think people must feel they save money or save space on a project, but they really do neither.”

We asked Ms. Schemper about the use of Wave racks, how many bikes the wave in front of building #2 could hold and about placement outside instead of in the garage. Here’s what she told us:

“Per the site plan approved by the Planning Commission, that location was to accommodate 24 bicycles. Some buildings will have multiple banks of racks, and additional racks will be located in the pool area. Our current code does not require specifications for bicycle racks to the level of detail you have provided.” 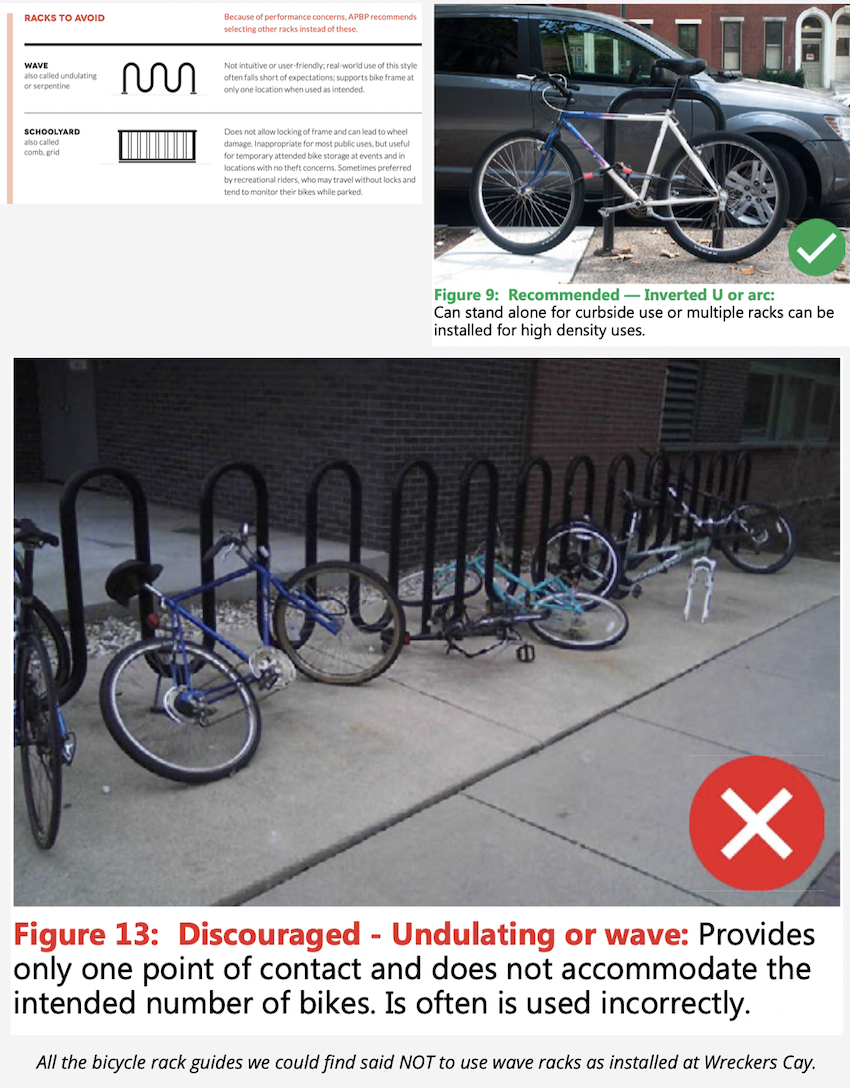 Note: We reached out to management at Wreckers Cay. While their front office confirmed the September 15 move in date and told us the property manager would give us a call to discuss bikes because “they were very excited about all they were doing for bikes,” in the end we never received that call.

Progressive bicycle-friendly cities and smart developers across the country have realized the importance of convenient, secure, and dry bicycle parking in attracting more people to use bicycles for transportation. Many cities routinely provide guides and ongoing assistance throughout the building process to ensure bicycle parking is done correctly. And developers, knowing customers expect these amenities, are more than willing to go above and beyond what’s required and do the right thing because it helps their bottom line. None of this seems to be happening here at Wreckers Cay and it shows.

Arlington County Virginia, where I use to work before moving to Key West in 2015, has for decades now both required great bicycle parking AND provided handholding to developers to get it correct. Here’s their guide. Here’s some more from Toronto, Seattle, Portland, San Francisco, Washington, D.C., Philadelphia, Los Angeles and little ol Provincetown. Yes, mostly big cities, but it isn’t hard to find some simple common denominators about bicycle parking for multifamily residential buildings doing a simple Google search. Even bike rack manufacturers, such as Madrax, have wonderful resources on bike storage. So, couldn’t the people at the County and Wreckers Cay do a little research? 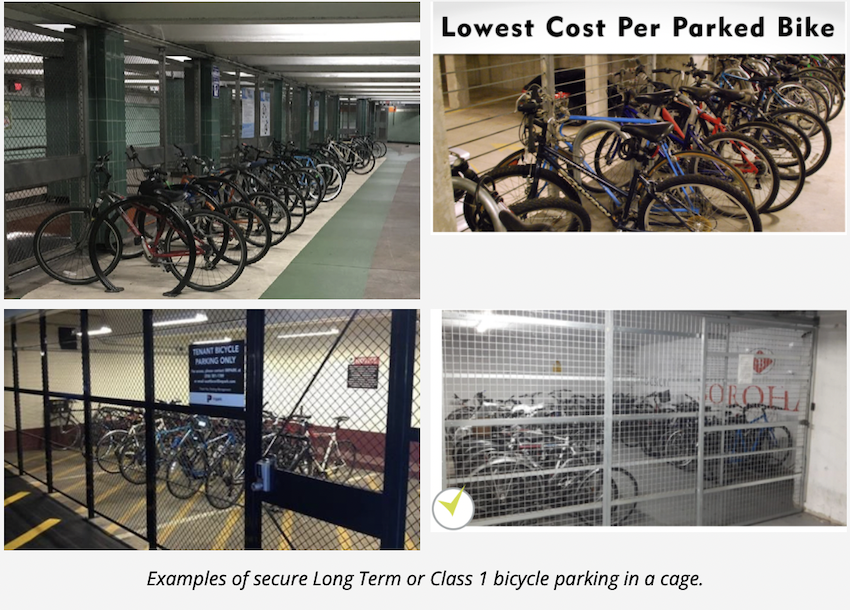 Most places categorize parking by the amount of time the parking space is used. Short Term vs Long Term parking is one way to say it. Class 1 vs. Class 2 Parking is another. Long Term or Class 1 parking is designed for residents or employees who need overnight or all-day storage. Long term parking users are typically willing to trade a little convenience for weather protection and security.

Short Term or Class 2 parking is usually for people going to a business or institution for a few hours. It should be easy to use and very close to the destination. It usually isn’t weather protected but is in a visible location nearby.

If you’d like a decent example of what to do, let’s look at the Key West Housing Authority’s under construction 104-unit Garden View Apartments on College Road. They are putting parking for 77 bikes and 40 scooters in the garage under the units along with 61 car parking spaces. And another 58 car parking spaces outside. While it doesn’t look like the bike parking at Garden View will have bicycle cages or electric, putting them under cover and using proper Inverted U racks is a great improvement over the norm.

Also take a look at this picture of the bicycle parking Beachside Marriott has in its garage. Under cover. Check. Inverted U rack. Check. 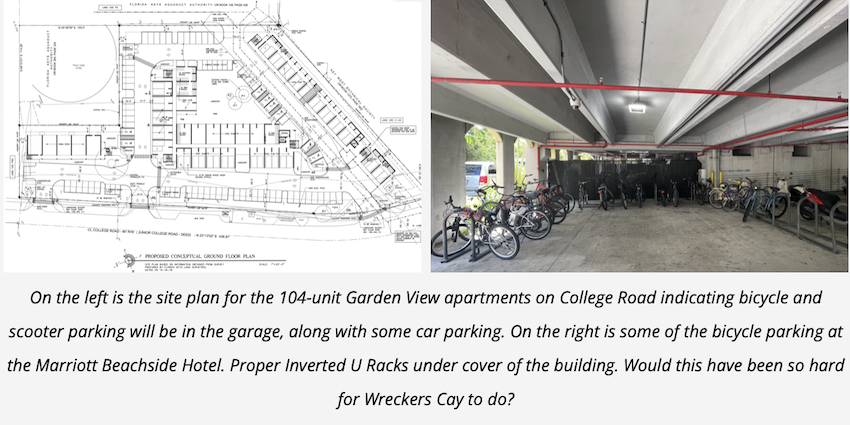 What Wreckers Cay Should Be Doing

Wreckers Cay, as a residential complex should have Long Term, Class 1 parking that is protected from the weather AND is secure. So proper, easy-to-use Inverted U bike racks should be installed in the garage under cover AND security provided via a locked room or cage. The room/cage could be as simple as erecting a chain link fence around the bike racks and only providing keys to those using the cage. With plenty of construction workers still on site, it should be easier to install the racks, cage, and even electric outlets for recharging now, rather than retrofitting them in later.

City and County leaders have an interest in not making our traffic congestion and downtown parking problems worse by failing to provide good options and incentives for people to use public transit and bicycles with these new developments. Developers of the large-scale properties have a monetary incentive to build less space hogging car parking that also allows more room to put in residential amenities such as shade trees and landscaping, picnic tables, fire pits and grills, a playground, a bocce or pickle ball court and/or art. None of which fit now because of well, parking. The developer and County still have some time to get this right, especially as construction is still happening. But do any of the people involved, from County planning officials to Wreckers Cay management view bicycle transportation as real enough to fix it? Or will everyone default to car-centric, mainland Florida values that don’t belong on our little islands. The balls in their court and the citizens are watching.