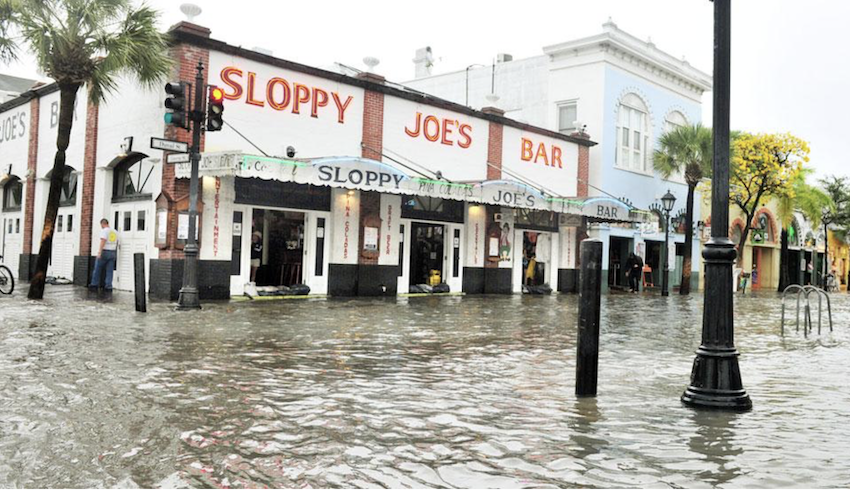 Last week the United Nations Intergovernmental Panel on Climate Change (IPCC) released: Climate Change 2022 – Impacts, Adaption and Vulnerability – Summary for Policy Makers, a report drawing on thousands of academic studies from around the world that warns us our planet is getting hotter and as a result raising sea levels several feet in the near future with catastrophic consequences. The New York Times headline blared “Climate Change Is Harming the Planet Faster Than We Can Adapt.” The Washington Post said of the report, “Communities must more aggressively adapt for the changes they know are coming. These investments could save trillions of dollars and millions of lives, but they have so far been in short supply.” For those of us living in the 113-mile-long island chain of the Florida Keys, where the average elevation is 3.2 feet, it’s enough to make you shudder and run for the hills.

Luckily for us then that Monroe County does indeed have a plan to adapt to rising sea levels. Several in fact. And they’ve been at it many years already. Collecting data. Assessing vulnerability for habitat, buildings, and infrastructure. Identifying policy and funding options. Developing engineering plans. And even testing alternative solutions. In a world that mostly seems behind the eight ball on dealing with climate change and adapting to sea level rise, our own Monroe County government and its partners have been gamely plowing ahead with plans to adapt and save paradise. All its going to take to come to fruition is leadership, citizens coming together and a little bit of money. Okay a lot of money. 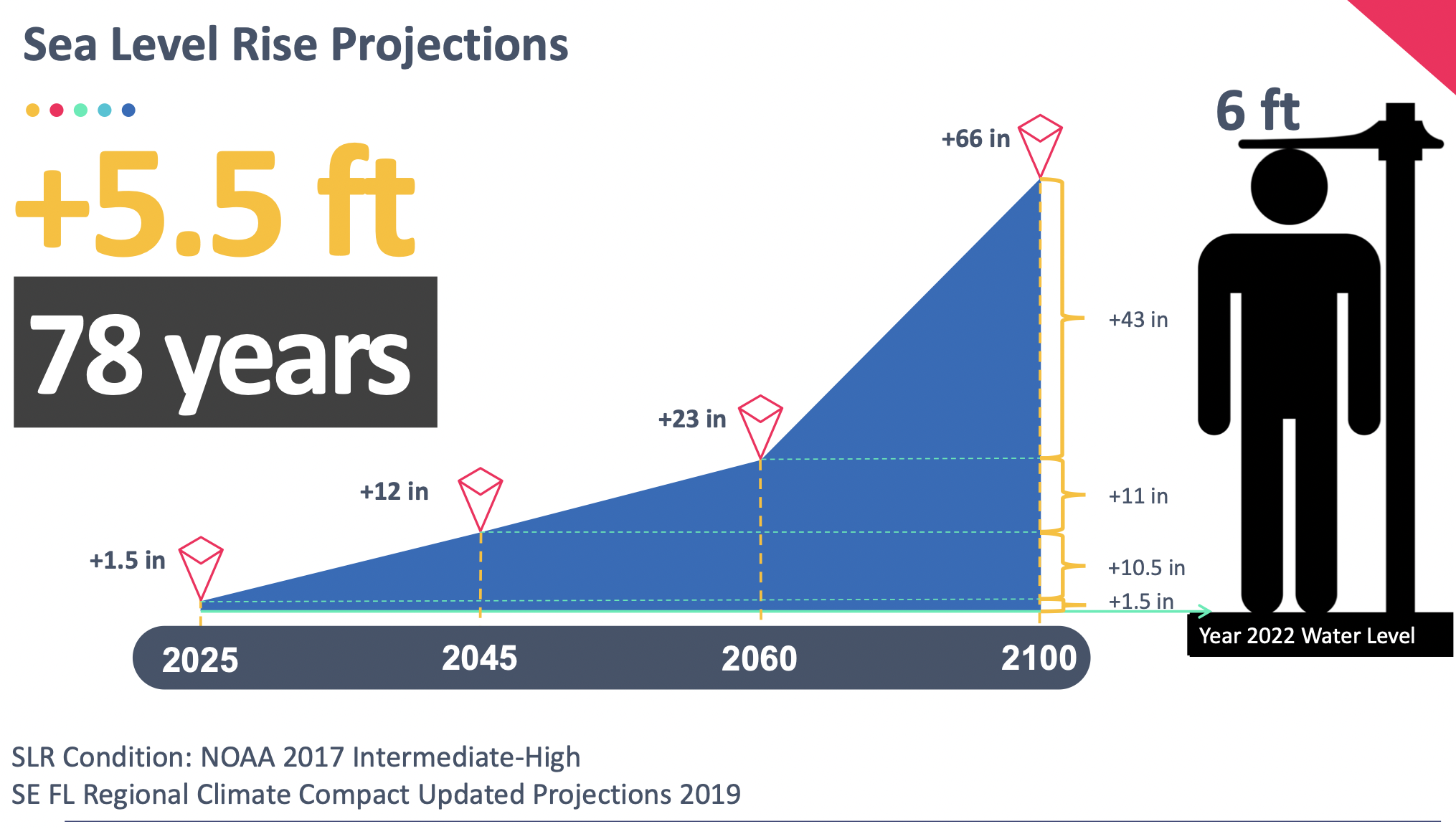 Wherever you live in the Keys we’ve all seen the effects of King Tides and stormwater on our streets and properties. So, imagine this as a year-round thing instead of just in October and November. That’s just a small example of what’s to ahead in the coming decades as our waters rise due to Climate Change. By 2025 it is predicted our local waters will rise 1.5 inches. By 2045 one foot and by 2060 almost 2 feet. When the baseline rises like that, everything gets worse at high tides and especially during extreme weather events.

We’ve Got a Plan for That 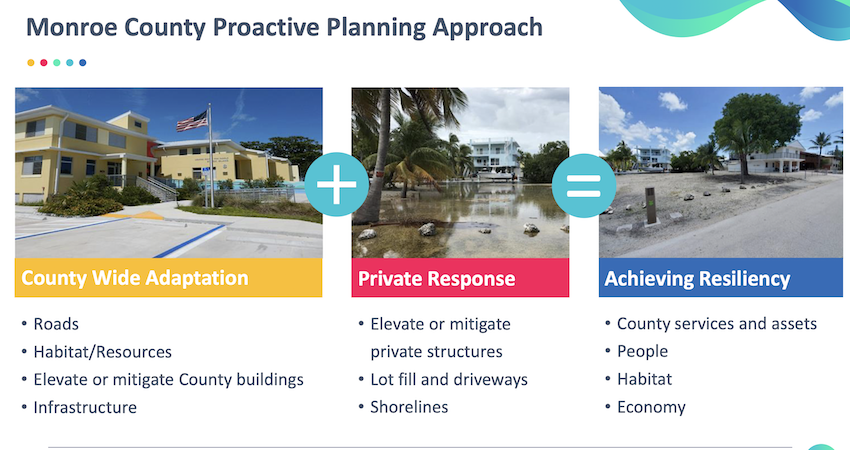 I attended a February 23 online Roads Adaption Project Virtual Public Meeting hosted by Rhonda Haag, the County’s Chief Resilience Officer and Judith Clark, Director of Engineering. They and the extended consultant team (Emilio Corrales, P.E. – Project Manager, HDR, Inc.; Greg Corning, P.E. – subconsultant from Wood Environmental Engineering and Erin Deady – subconsultant from Erin Deady LLC) that reports to Rhonda gave a presentation (video and PowerPoint) that is an absolute master class in efficiently explaining our vulnerability to the problems of sea level rise, King Tides and extreme weather events and what we as a community can do to adapt, specifically by raising our roads. I came away thinking where did these wonky, passionate public servants come from? I was awed by the amount of effort that’s already gone into the projects and how rapidly they were collecting and analyzing data and turning that into concrete, actionable plans. I appreciated how they tried to tell a simple story about a very complicated subject using data, charts, and pictures to depict a way out of this crisis. I can’t say I got everything they threw at us in one hour, but my overall impression was that these extremely smart people can save our home if we follow their direction.

When I talked to Rhonda, she shared that a couple years ago, before they hired the consultant team, she was less optimistic we could save our Keys. But now, two years later after we’ve done the engineering, she said the story is much more positive. “There’s a lot of potential sea level rise coming to the Keys, but science and engineering have shown we can extend our stay for quite a while.”

Rhonda said of the team: “They are a professional team that knows their subject areas well (engineering, permitting and policy and legal matters related to roads). They have been enormously helpful in working with the County on this project.” Believe me, it showed.

The County is addressing Climate Change and sea level rise in a big and comprehensive way. Rhonda tells me that few other places in the country could be looked to for examples of how to lay out the work when they started this project, so that much of the team’s work is breaking new ground. 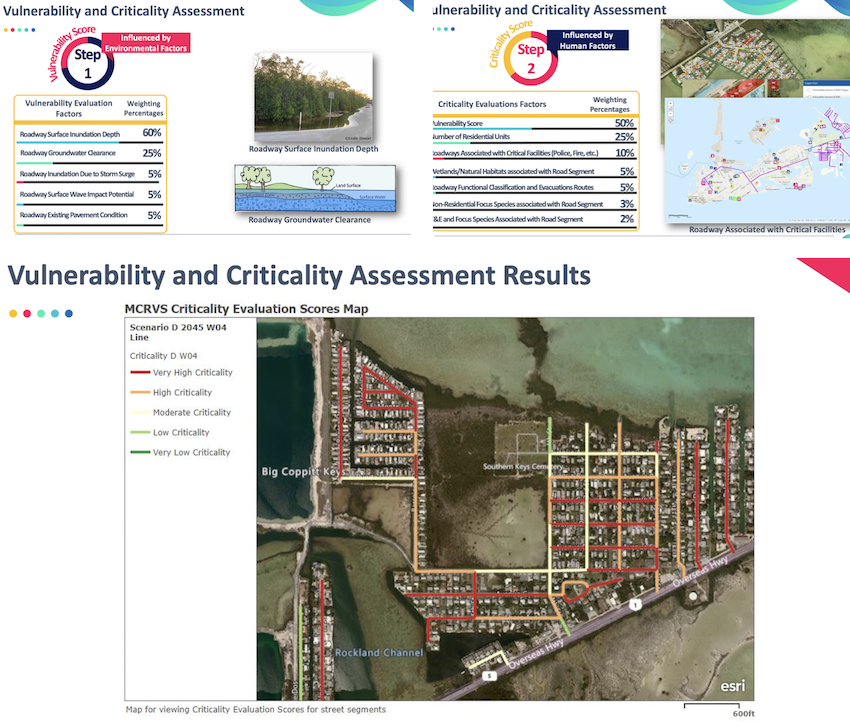 The presentation concentrated on the 311 miles of roads in the unincorporated areas of the County. To date they’ve completed accurately collecting LiDAR data (high resolution maps depicting elevation) for all 311 miles of road, developing a roadway ‘Vulnerability Score’ – influenced by environmental factors such as roadway surface inundation and a ‘Criticality Score’ – influenced by human factors, like how many people live along a segment and then collected these into 96 neighborhood area groups. Engineering analysis was then conducted to assess what areas where most vulnerable and initial plans and recommendations were made for these neighborhoods on where and how high to raise the roads and engineering solutions on how to deal with the water in an environmentally positive way.

If you got to keysroadsplan.com you can go to the Maps section and find your street and neighborhood’s specific plan. No one size fits all. Everything depends upon the elevation, the width of the road, it’s ‘Score,’ what’s next to road and so much more. The depth of data, analysis and detailed recommendations by road segment is stunning and worth exploring. It also includes shoulders, sidewalks, and bike paths. We should note that the team stressed raising the roads is just part of the solution. “Harmonizing” the road fix with the adjacent properties is going to be a team effort with property owners as raising the road and, in many cases, some amount of land on either side will affect driveways, mailboxes, and utility poles and lines.

About 152 miles or half of the total are considered vulnerable and critical county roads that need to be raised by 2045 when it is expected that our seas will have risen at least one foot. This will affect 12,585 residential units or 71% of the population in the unincorporated part of the County.

There’s too much detail about all the different ways the roads can be raised and how you take care of the water – because gravity dependent storm drain systems won’t work in a future where our water table has risen – in the hour-long presentation to do it justice here. So, we encourage you to view the PowerPoint presentation here or watch the video of the presentation here.

Key West and the other four municipalities in the Keys have not been left out. We’re told that each of the municipalities has already budgeted monies to collect the needed LiDAR data and the County has applied for grants that would help stretch that into the analysis, engineering and recommendations phases already completed for the non-incorporated portions of the County. We’re all in this together.

We Can Extend Our Stay on This Island Chain. But Only If We Act 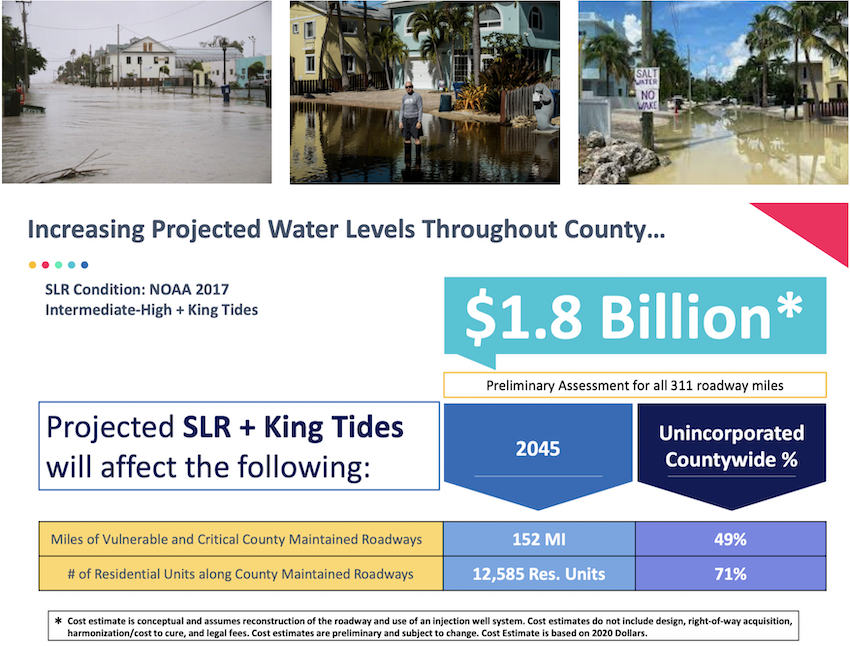 County staff and the consultant team are busy wrapping up their work so they can release a final report to the County Commission in June 2022. Then the real hard work begins because well that’s when our political leaders need to find the will and gumption to figure out how to fund a $1.8 billion dollar project over the next 25 years.

“First the plan is doable, and we can remain here as residents and businesses for the foreseeable future. Second in order to do that we need a financial plan to help fund these road elevations. This is a new program for the county and new programs require new funding sources. Regular tax dollars cannot fund this program. As we still have to operate and maintain all of the existing public facilities.”

Hopefully most of us love our home enough that we’re willing to chip in a little bit more to leverage State, Federal and private dollars that could be available to help mitigate rising sea levels. We must find some creative ways to develop new revenue streams that can help too. Now is not the time to stick our heads in the sand and deny the problem, hope it goes away, or selfishly leave it to another generation to fix.

We’re especially fortunate that because of the County’s initial foresight we’ve got a team of people who have already started the hard work of collecting the data and doing the engineering to save us. We need to trust the science and get to work. Find out more about this important project at the links below and please tell our County and City Commissioners that you expect them to act.

You can find all the KONK Life Streets for People column articles here and here and the most recent 2022 stories below:

Chris Hamilton is founder of the local advocacy group Friends of Car-Free Key West & Duval Street/Historic Downtown. He’s a native of the District of Columbia, where for a couple decades+ he led nationally renowned efforts promoting transit, bike, walk and smart growth for Arlington County, VA’s DOT. Chris has lived in Key West since 2015. He lives car-free downtown and works and volunteers for a couple non-profits. Follow him on Twitter here and his blog here.