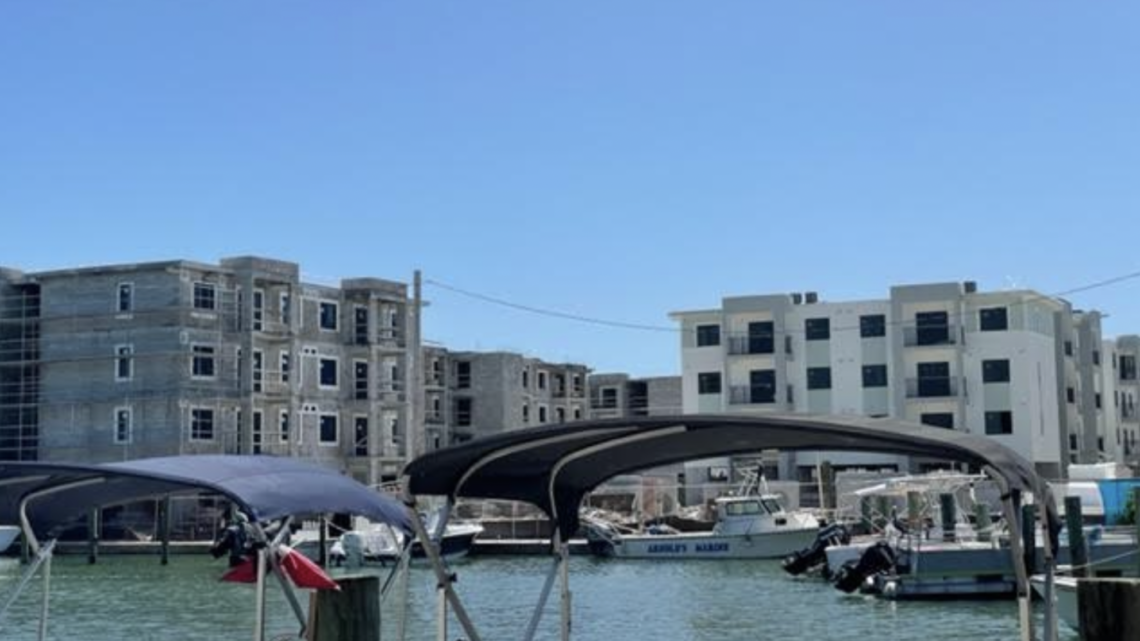 This week Roy’s Trailer Park at 6500 Maloney Avenue on Stock Island gave their 108 owners notice that they had six months to relocate because the property is going to be redeveloped into 240 units of workforce housing apartments. The net of 132 new units brings us to about 860 workforce housing units, on Stock Island and the Lower Keys, that have been recently occupied, or are under construction, or have building permits approved in just the last two years. All this new housing is north of Cow Key Bridge. So, nearly all work, shopping and entertainment trips into Key West will be by car because transit options are so awful. These additional car trips harm our environment and degrade our island with more traffic and parking congestion.

We think it is very good news that more needed workforce housing is being constructed. But if we don’t build the new housing, where it should be, on the island of Key West where more people could bike and walk to work, shop, and play, shouldn’t the City and County be enhancing Key West Transit service to mitigate the mess? Yes, yes, they should. Here’s how.

Roy’s Trailer Park undergoing redevelopment from 108 trailers to 240 workforce apartments means there’s a net of 132 additional housing units on Stock Island. (For more on the story read: Stock Island Trailer Park To Be Demolished & Redeveloped, Mandy Miles, May 16, 2022) Also on Stock Island, at the under construction 280-Unit Wreckers Cay, tenants are expected to start moving in on September 1, 2022. Wreckers Cay officials expect to bring new buildings online at about one a month, so the project should be fully occupied within a year. The Key West Housing Authority’s 104-unit Garden View Apartments on College Road is under construction and should come online in 2023. That’s 516 new housing units on Stock Island.

There’s an additional 352 units beyond Stock Island in the Lower Keys. On Big Coppitt, the 208-unit Quarry Apartments were just finished at the end of 2021. Building permits have been issued for 88-units at Dockside & the Landings Apartments on Lower Sugarloaf. 36 units received building permits in two separate developments on Cudjoe Key. Another twenty plus units have been requested on Big Coppitt.

The 868 unit total doesn’t even include the 148-transient condos recently approved at the Key West Harbor Yacht Club, also on Maloney Avenue, on Stock Island.

There’s a lot of concern about traffic, especially along U.S. 1, because visitor traffic is increasing too. As all the adult and teenage residents of these new car-dependent developments each need a car to get around, it is a traffic nightmare in the making. We need to do something. Fast. 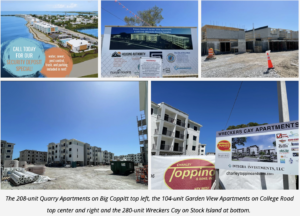 The Bus Service Is Awful and Ridership is Declining. The Solution? More Frequent and Free Service

The County and City should be encouraging these new residents to use the bus instead of driving. The problem is that the bus service is so awful, no one uses it for commuting. Census data shows 1% of Monroe County residents and less than 1% of Key West residents use the bus to get to work. That’s because on the Lower Keys Shuttle there are just 10 trips all day into Key West and 10 trips a day from Key West to Marathon. It’s 95-120 minutes between buses. On the North and South Lines that serve Stock Island the bus comes along every 80-95 on weekdays and less on the weekends. The frequency of the buses and span of service simply can’t compete with the convenience of driving, no matter the hassles of traffic and parking. And if existing residents don’t use it, why would we expect the new people moving in to use it?

Then there’s the issue of cost. The Lower Keys Shuttle is $4 each way. The North and South Lines are $2. While one can get reasonably priced $75 and $25 monthly passes for each, the incentive to take the bus when the service is so infrequent just isn’t there. It needs to be frequent and free.

The Perry and Oceans Edge hotels on Stock Island each offer free shuttle buses from their properties to the Historic Seaport in downtown Key West. They operate hourly service in each direction from 9:00 a.m. to 11:00 p.m. The Marriott Beachside’s shuttle operates hourly from 8:00 am to 11:00 pm and has two stops on Duval as well as the airport. They work at keeping a portion of the guests from using their cars to get downtown.

To its credit the County did require the developer to install two bus shelters at bus stops next to Wreckers Cay. And on Wednesday they just voted to spend $425,000 to a potential match a State grant to provide a carsharing service between Stock Island and Key West to help reduce traffic trips (County to Vote On Ride-Sharing Program, Timothy O’Hara, May 14, 2022). But why aren’t the developers of larger projects like Wreckers Cay, Garden View, the Quarry, and Dockside & the Landings Apartments required to do shuttles like what the hotels do? Or if not their own shuttle, then some significant annual contribution to Key West Transit that can buy free rides for residents and help increase the frequency? This kind of thing is done all over the country to mitigate the traffic and parking congestion that comes with new development. Seems we’re missing the boat by not requiring a shuttle or contribution to Key West Transit on Stock Island and the Lower Keys. Perhaps the County can start with the new Roy’s Trailer Park development.

Think of it this way, if the County can vote to spend $425,000 for a carsharing service, why aren’t they contributing more to Key West Transit to increase the frequency of the buses serving Stock Island? 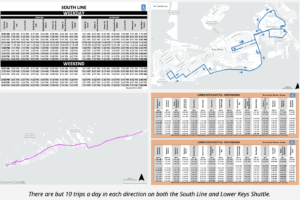 Through many meetings and multiple processes, a consensus has been built that improved public transit is vital for our future prosperity. Key West Transit’s adopted 10-Year Transit Development Plan (TDP), the City’s Sustainability Advisory Board (SAB) and the first draft of the City’s Key West Forward Strategic Plan all called for increasing investment in our public transit system to pay bus drivers more, increase the abysmal frequency on all routes and move towards free fares. The Mayor and most Commissioners echoed the call during the budget hearings.

During last year’s Strategic Plan process, presentations to the public and Commission in June stated that North and South Lines should go from the current 80 – 95 minutes to 30 minutes and on the Lower Keys Shuttle from 95 – 120 minutes to every 60 minutes. At the time the Mayor and Commissioners noted they hoped the 30-minutes was interim as they eventually wanted to get to 15 minutes between buses. After all this planning and consensus building the Finance Department presented a no-growth Transit budget for the coming year at the July 22nd City Commission Budget Workshop that didn’t include these changes. Later we were told that a decision by the City to raise employee salaries by $2.8 million annually or $5,417 per employee meant there was no money for transit.

So, we’ve lost a year when we could be making improvements. We suppose we have no choice but to give leaders a mulligan and move forward. But when we asked Key West Transit officials, on two different occasions what plans they had to serve these new communities, the totality of their response was “Existing routes already serve these areas.” That’s not acceptable. Not when buses arrive every 80 to 120 minutes.

City AND County Need to Work Together to Invest in Transit. NOW!

We must do better than just 10 trips a day in each direction on the Lower Keys Shuttle and the North and South lines serving Stock Island. Waiting an hour and twenty minutes to two hours between buses isn’t reliable and frequent enough service to entice anyone to ditch their car and take transit instead.

In next year’s budget, the process for which starts next month, we need to do what the Strategic Plan originally called for and increase the frequency on the Lower Keys Shuttle to at least every 60 minutes and on the North and South lines to at least every 30 minutes. And the next year that should go to every 30 minutes and 15 minutes respectively. Seven days a week. Early morning until late at night. And the ride needs to be FREE for residents.

Currently 55% of the Transit Department’s budget comes from Federal and State sources, and that doesn’t include a recent additional $1M American Rescue Plan grant. That grant could be used to jump start more frequent service rather than simply replacing other sources and saving elsewhere. Most of the balance of the 45% comes from various dedicated parking fees. There’s little if any local tax dollars going into the transit system. Changing that could be an option. Or if there’s no stomach for using tax dollars, we need to get creative and find additional sources to cover an increased investment in the system. Higher parking fees? TDC funds? Sales tax? Bed tax? Liquor tax? Toll on Cow Key Bridge?

Again, we give the County credit for starting to search for ways to reduce traffic congestion. We wish the City was thinking similarly. What’s clear is that both the County and the City need to work together and find ways to invest in Key West Transit. If more people take the bus, it makes our streets less congested and makes it easier to find parking for residents that must drive. It is friendly to our environment and helps combat climate change. It will allow more of our beleaguered workforce to get around without the expense of a car. It makes us healthier and happier too. We must get this done or the traffic nightmare will be upon us. 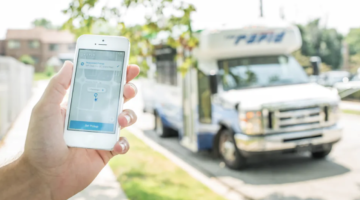 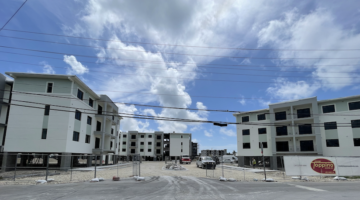