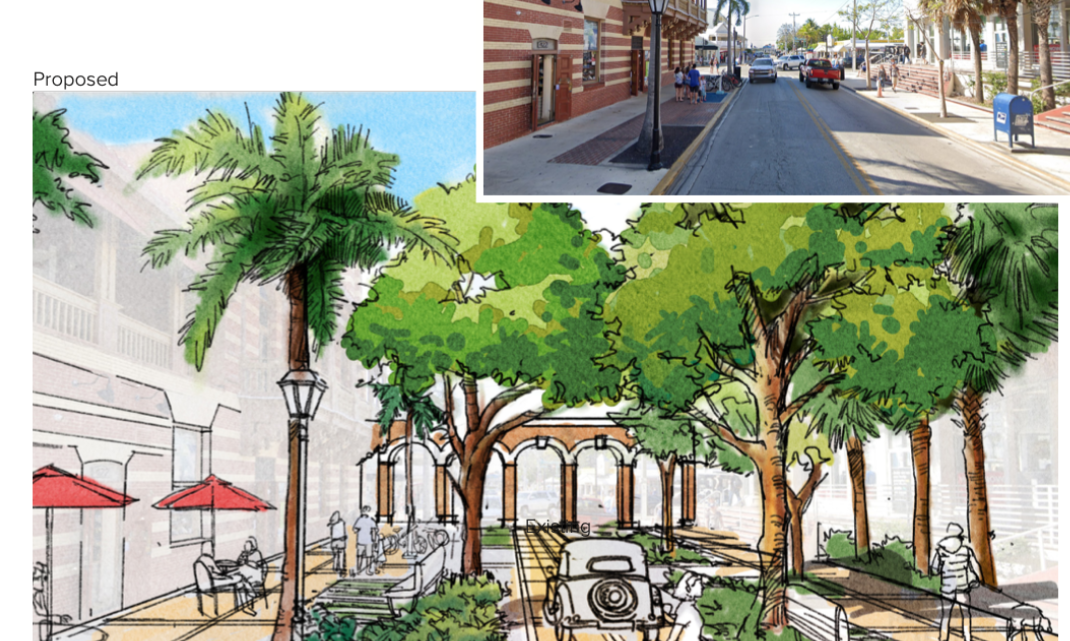 From a Promise by Mayor Johnston to a Full-Blown Project

The Mayor ran on a platform of revitalizing Duval Street in 2018. She came through by initiating the Mall on Duval pilot project in 2019 and that begat a Duval Street Revitalization Study RFQ in 2020. An amazing consultant team was selected at the August 19, 2020 City Commission meeting, a contract was signed by both parties in November and agreement on a budget and scope of work for Task 1 of the project should come to the Commission in March. Then the fun starts as the consultant begins data collection and community outreach. And thus, begins our story of the Wee Donkey, whataboutism, bathwater and Duval Street’s future…

What is Duval Street Revitalization?

According to the City’s Request for Qualifications the goal of the project is to “renovate and revitalize Duval Street to increase opportunities for public use as an iconic civic space for leisure, commerce and tourism; address the infrastructure which will allow for reasonable maintenance frequency and reduce costs to businesses and taxpayers; improve safety for pedestrians and vehicles; and maintain mobility for desired transit operations for all users.”

“We all love our main street and want to see it prosper and bring our community together” said Mayor Johnston in championing the RFQ:

“Mall on Duval brought locals downtown who haven’t been there in years, prompting a conversation about what improvements need to be made, including widening sidewalks — they range from 8 to 18 feet — and adding planters and benches. There are street designs that have the sidewalk on the same level, and you divide it off by concrete planters. The street can be cobblestone and the sidewalks can be different materials. … We also need shade, benches and water fountains.”

What that ultimately looks like, well that’s the hard part.

Mary, Joseph and the Wee Donkey!

Last week Keys Weekly did a story on the upcoming project entitled Key West to Start Redesigning Duval Street, (Mandy Miles, February 12, 2021). It featured this picture from the consultant that depicts an artist’s rendering of a potential future Duval Street. 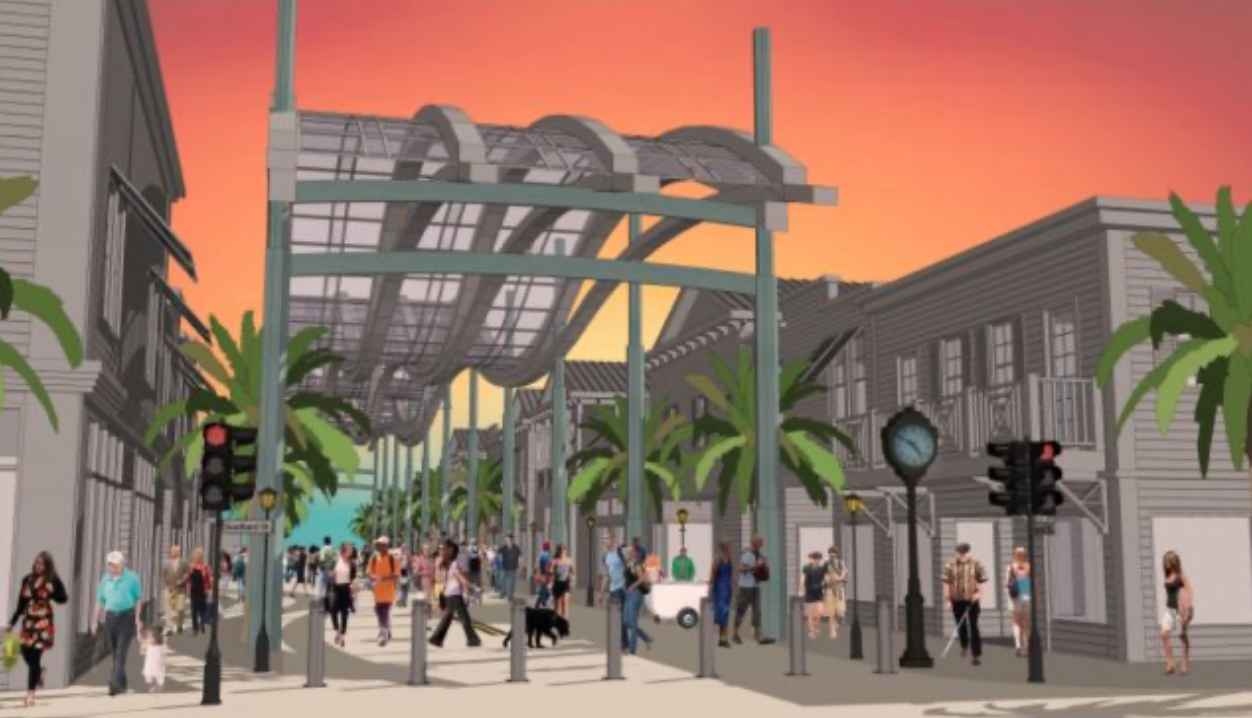 All hell broke loose on the Key West Interwebs in reaction. On multiple Facebook groups and local gathering places was heard:

These were the most common and charitable comments. But the kicker was this from friend and local Key West Island News publisher Linda Grist Cunningham: “Mary, Joseph and the Wee Donkey! That is one horrific “rendering.” Linda went on to say: “If that’s what’s in their imagination, if they think it’s OK to use a conceptual drawing that has no charm, no connection to the island, Key West’s mystique is gone.”

And you know what? Linda and all similar commenters are exactly right. We want Key West, Duval Street and our little historic downtown to be what they are – Key West! Not someplace else.

Linda, to her credit took the conversation a step further and wrote a very nice piece Revitalizing Duval – Let’s Meet in the Middle (February 16, 2021) saying “It’s a project and process I support.” She reiterated her rightful objections to the rendering and then smartly talked about five consistent threads she gleaned from the comments that we likely can all agree on:

While many people rightly took to the discussion decrying “other-towning” Key West, many people simply reverted to Whataboutism – the practice of responding to a difficult question by making a counteraccusation or raising a different issue entirely. Here’s just a little sample from the chatter:

“But what about fixing Bertha?”

“But what about fixing Whitehead?”

“But what about the potholes on the other streets?”

“But what about fixing the other side of the island?”

“But what about the residents?”

“But what about helping local businesses stay afloat?”

“But what about helping locals open businesses?”

“But what about fixing the beach?”

“But what about affordable housing?”

“But what about workforce housing?”

“But what about all the people with no masks?”

“But what about the stupid mask mandate?”

“But what if I like to drive my car on Duval?”

“But how about investing in (fill in the blank) instead?”

“But what about fixing the airport?”

“But what about the children?”

Perhaps legitimate questions all. But NOT in the context attempting to revitalize our Main Street.

Don’t Throw the Baby Out with the Bathwater

Knee-jerk whataboutism responses just take all communication off topic. Perhaps that’s the user’s goal? By bringing up other subjects entirely, it makes it less likely we can have a constructive discussion of the issue at hand. Or it makes it more likely that nothing gets done. That’s short-sighted.

So, let’s agree not throw the baby (Duval Street Revitalization) out with the bathwater. Says City Manager Greg Veliz:

“The last facelift on Duval was back in the 1970s. Now we begin the process of community involvement — public meetings, gathering ideas, talking to property owners – to find out exactly what each member of this community would like to see happen. There is no preconceived plan, that’s where the community’s opinion and vision comes in. This is an opportunity for all of us to have a hand in what we envision for our city,”

So, let’s focus on Duval please. As the Mayor and Manager have said, the vision for Duval Street will ultimately come from we the people who live here and the businesses downtown.

In the consultant’s qualifications they teased out a few things for us to consider. We like the notion of Duval as three streets with one name. Lower, Middle and Upper Duval each have their own vibe. Ideas such as innovative tree planting systems, pavers with curbless sidewalks, retractable bollards, innovative tree grates and trench drains present opportunities for doing things differently. The possibility of one-way blocks to narrow the vehicular path to expand the pedestrian zone and tree cover and additional benches, cafe’ seating and art are the essence of the “streets for people” we advocate for.

KCI/Dover Kohl cited a number of similar projects that should make us feel good about their bona fides. To name a few there’s Clematis Street in West Palm Beach, Music Row in Nashville, Las Olas Boulevard and Breakers Row, in Fort Lauderdale, and Lake Worth Beach Design Guidelines to name just a few. To reiterate, we don’t want Key West’s Main Street to look like any of these places, but these two firms are adept at listening to locals and coming up with planning and engineering solutions to help guide us to a unique and better future. At Friends of Car-Free Key West & Duval Street/Historic Downtown we have been following the Facebook page of Dover Kohl for a long time and love their point of view. KCI Technologies is the kind of engineering and construction firm that will help make our project real and environmentally and sustainably sound.

The track record of the consulting team and their approach give us faith in the process. The fact that the Mayor and City Hall are behind this and willing to invest in our downtown is grounds for optimism. The fact that so many people love our island and want to thoughtfully participate, give us hope.

The Times, They Are a Changing

Lastly, the other common online comment thread was some form of:

“I don’t want anything to change.”

This isn’t really a constructive response either because change happens whether or not you want it to and the opportunity with this project is to try to direct that change a bit. Key West in the heady times of the overseas railroad in the 1920’s until the hurricane in ‘35 was different from the military dependent times thereafter. The funky, laid back 1970’s was altogether different after the cruise ships and tourist boom came here in the late 80’s and 90’s. It is different still today. It has constantly been changing. Here’s how our friend, local artist John Martini sums it up in response to the “it ain’t broke” and “whataboutism” crowds:

“Key west is not a museum. Key West history is a story of nothing but change.

Let’s participate, have our voices heard and create an improved Duval Street appropriate to the resident’s needs. There is no plan until the citizens make known their needs. You can participate or you can continue on as keyboard warriors accomplishing nothing.”

Indeed. Let’s move past the horrific rendering, agree not to whatabout this project and positively participate in the Duval Revitalization process to build a better future for our little island paradise.