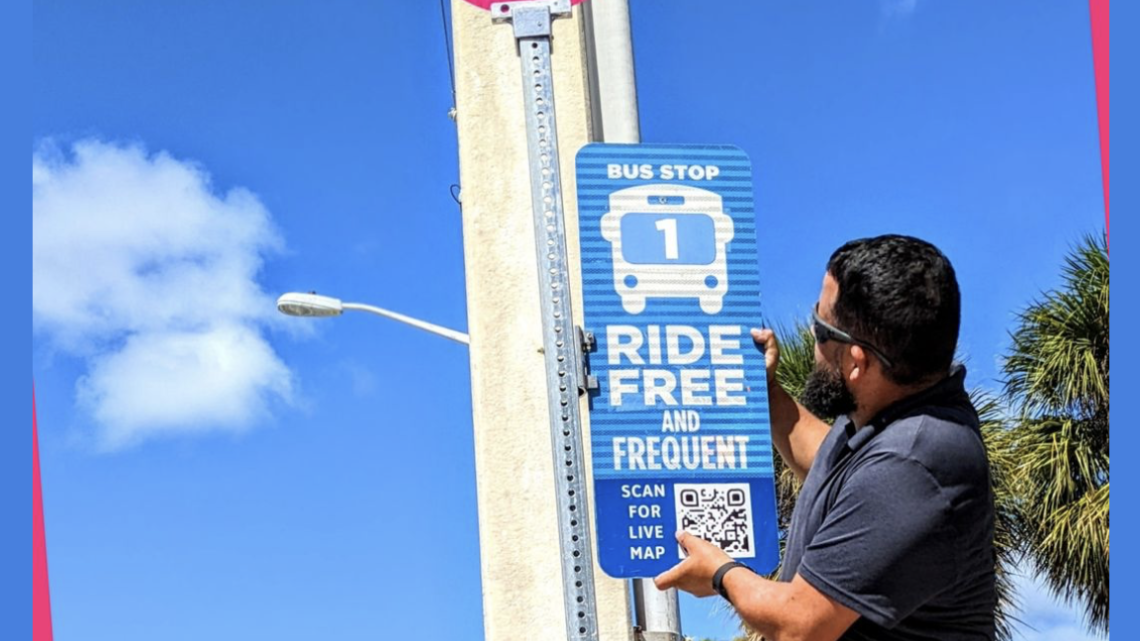 Color us impressed. The City has just about completed a simple, inexpensive, and almost elegant revamp of the signage at the 18 Duval Loop bus stops downtown. Most of the bus stops now include a pink “topper” that says Duval Loop, new identifying signs that indicate the stop number, the slogan “Ride Free and Frequent” and a QR code that when scanned takes people directly to the Key West Transit live map so one can see where the bus goes and when the next bus is coming.

Research says good information at bus stops encourages ridership, improves the experience, and even makes the wait feel shorter. The new signage also communicates to thousands of daily visitors, residents, and workers downtown that the City cares, which wasn’t always the case, given the recent embarrassing condition of the signs. All because some City staff took the proverbial bull by the horns and said, enough.

From Bad to Good In Just a Couple Months

“Last April 2, 2021, we began our story: “Experts say, the bus stop is one of the biggest signals, to everyone in the city, about a community’s attitude toward buses and their customers. What do Key West Transit’s bus stops say to residents, workers, and visitors? Judging by their quality and lack of information, one would have to answer: “We just done care!” Sadly, as we revisit these bus stops more than one year later, we find that absolutely nothing has changed on the ground.”

We followed that up a month later with a June 6 article about the Duval Loop in particular sharing pictures of each disheveled stop. The mish mash of missing information and absent signage exhibited a total lack of care on the City’s part. There was no consistency. Seven of 15 stops were missing Duval Loop identification. Half the stops had orange tape over the word FREE from a time two years ago when the service tried charging a $1. Zero stops had any information about frequencies, maps or where the bus went. It was a disaster and an embarrassment. Some people inside City Hall noticed the mess and took it upon themselves to do something, now, rather than wait for a future fix. 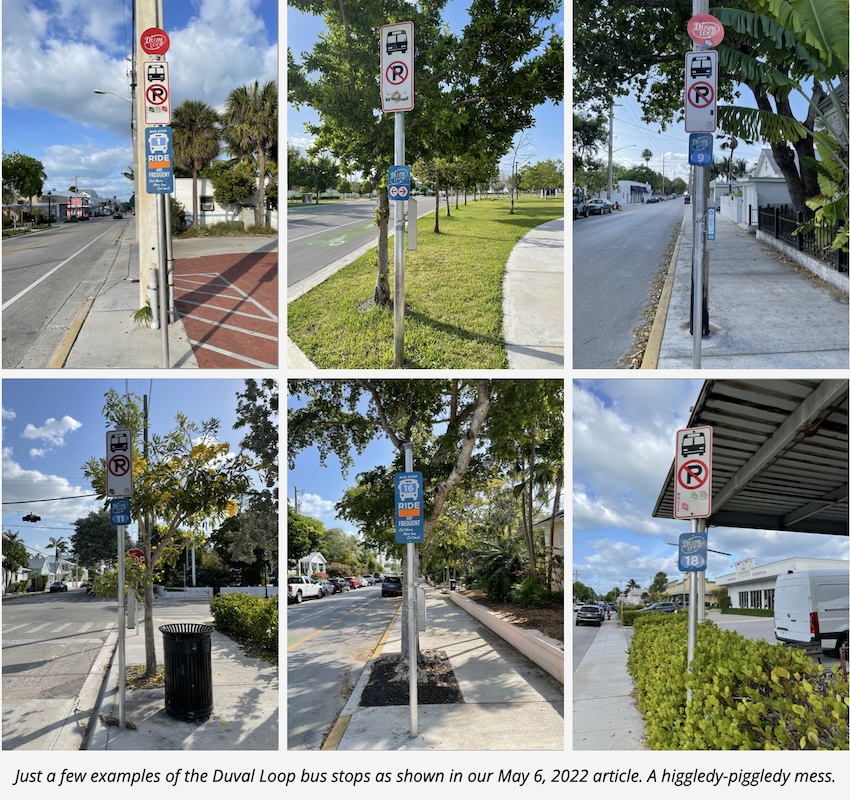 With Big Fix Maybe Another Year or More Away, These Are Interim Signs

Last August 2021, we brought you the story of the City’s Sustainability Coordinator Alison Higgins crafting and receiving a $510,000 grant to upgrade the 62 Lower Keys Shuttle bus stops and 20 of the most used Key West stops with bike racks, map and schedule information, lights and trash and recycle cans. As part of the grant project the City is matching it with $465,500 for a total project of $975,500. This will enable them to redo all the Duval Loop and all other Key West stops not covered in the original application. As the grant uses Federal and State funds a rigorous planning process for the stops must be adhered to. So, it took until June 3 of this year to get an RFP out for a contractor to do the work. We’ve heard all the BIDS that came in by the July 6 due date were over the budget set aside to do the project so staff will have to figure out how to proceed next. Even if the BIDS had come in within the funding available, officials tell us the project is slated to begin in Marathon and work its way down the Keys, so it could be a year, once construction and installation starts, until they get to Key West.

Knowing this Final Mile project has been coming for more than a year now, Key West Transit officials have been reluctant to spend any money on temporary signs. But as we’ve reported here and here, Key West bus stops have been dismal for a long time, and it is especially disconcerting, as reported here, on the City’s flagship route, the Duval Loop. So, Ryan Stachurski, the City’s Transportation Coordinator, got an idea to print some temporary signs when the City recently got a new sign printing machine. Here’s how Ryan explained it:

“With help from Community Services and working with Transit Operations Manager, Rogelio Hernandez, we were able to deploy a stop-gap Duval Loop sign refresh to help communicate the FREE service and get a virtual map into people’s hands. By scanning the QR code at the Duval Loop stops, riders see a live route map and can tell how long until the bus arrives. We already see 40 to 50 people a day using this feature.” 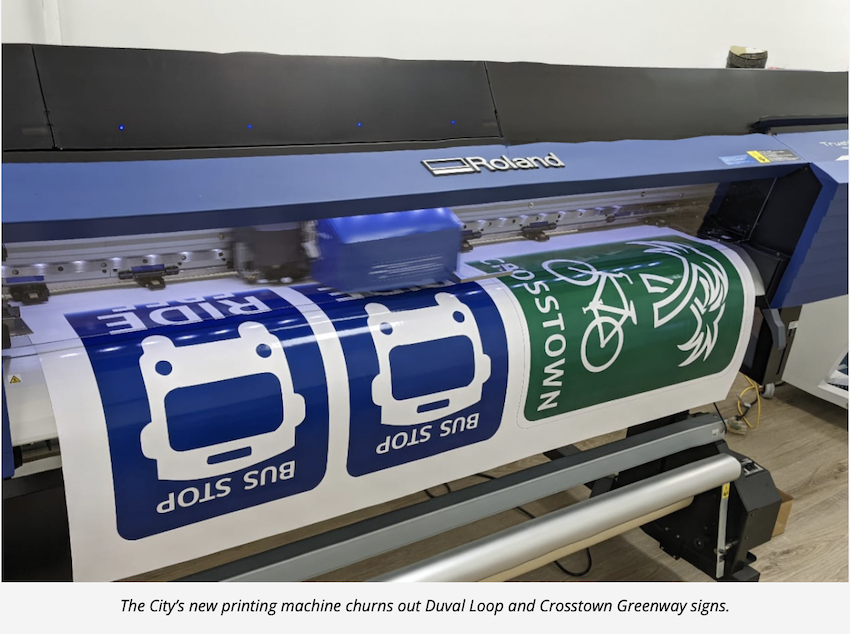 We saw the signs coming off the printer in a late June Facebook post. Since then, the staff team from three departments has quickly installed new pink Duval Loop toppers (they had been ordered long ago), taken down the existing higgledy-piggledy (perhaps we’ve been watching too much The Great British Baking Show) signage and installed the newly printed simple signs with the QR code. Three of the eighteen stops aren’t being used right now because of construction downtown that should be complete in September. Of the remaining 15 stops, all have received the QR code sign and 13 of 15 have the pink topper. And viola’, no more embarrassing bus stops. Here’s a link to the City’s spreadsheet tracking the progress of the refresh. And viola’, no more embarrassing bus stops. 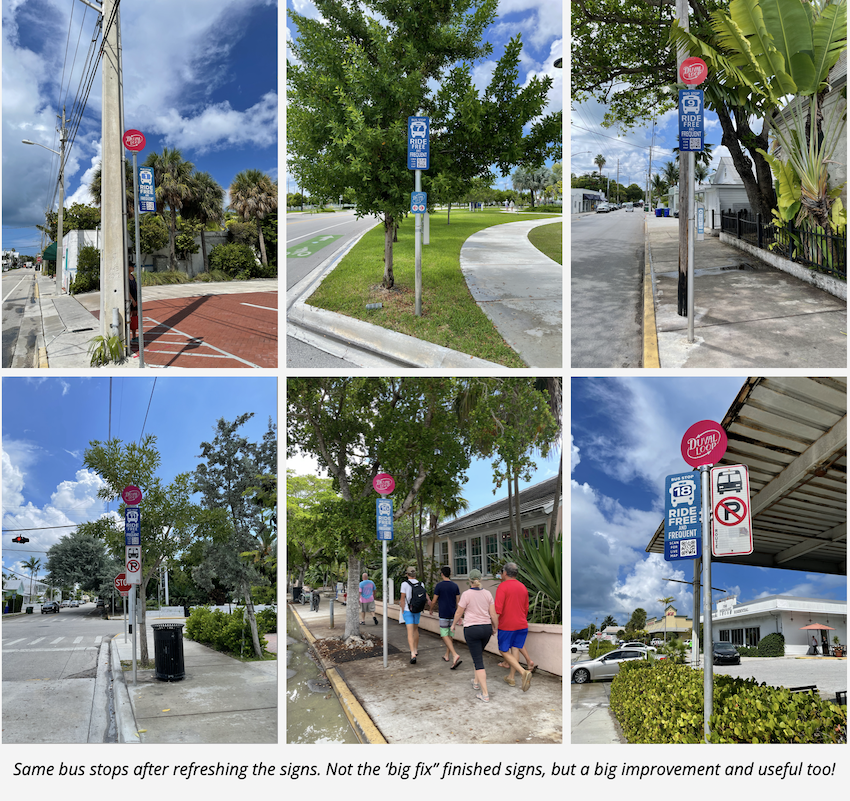 “The Duval Loop sign refresh was much needed, and it is just the beginning. Key West Transit believes bus schedule information should be at the palm of the riders’ hands, that’s where the QR code, which are placed on the Duval Loop stops come in to play. For those that aren’t tech savvy, Transit plans to place schedule information to include arrival times, hours of service and much more at each bus stops in the future. Special thanks to Ryan Stachurski, Multimodal Transportation Coordinator and Public work for their ongoing help with this project and future ones.”

This is what you’ll see when you scan the QR code with your phone. It is obviously working if about 50 people a day are already scanning it.

When the Final Mile grant funded bus stop “big fix” does finally happen, officials hope to rebrand the stops so you know it is a Lower Keys Shuttle, Key West Transit or Duval Loop bus stop. Bike racks, trash and recycle cans, lights and even bicycle fix it stations in a few locations will be included. Each stop will also feature map, schedule, and user information on a sign(s), right on the pole, so users won’t have to use their phone. That’s the way it should be! And better yet, include the QR code for live tracking of the bus’s whereabouts.

Sometime later this calendar year Key West Transit North and South Line routes are scheduled to be replaced with a new on-demand, bus-stop-to-bus-stop service. The North and South Line stops currently have zero information or branding. Just a sign that says, “Bus Stop” and has a no parking symbol. With the big fix from the Final Mile grant more than a year off in the future, perhaps this team can crank up the new sign printing machine again, so people can get information on how to use the new service, right at the bus stop. Stay tuned. 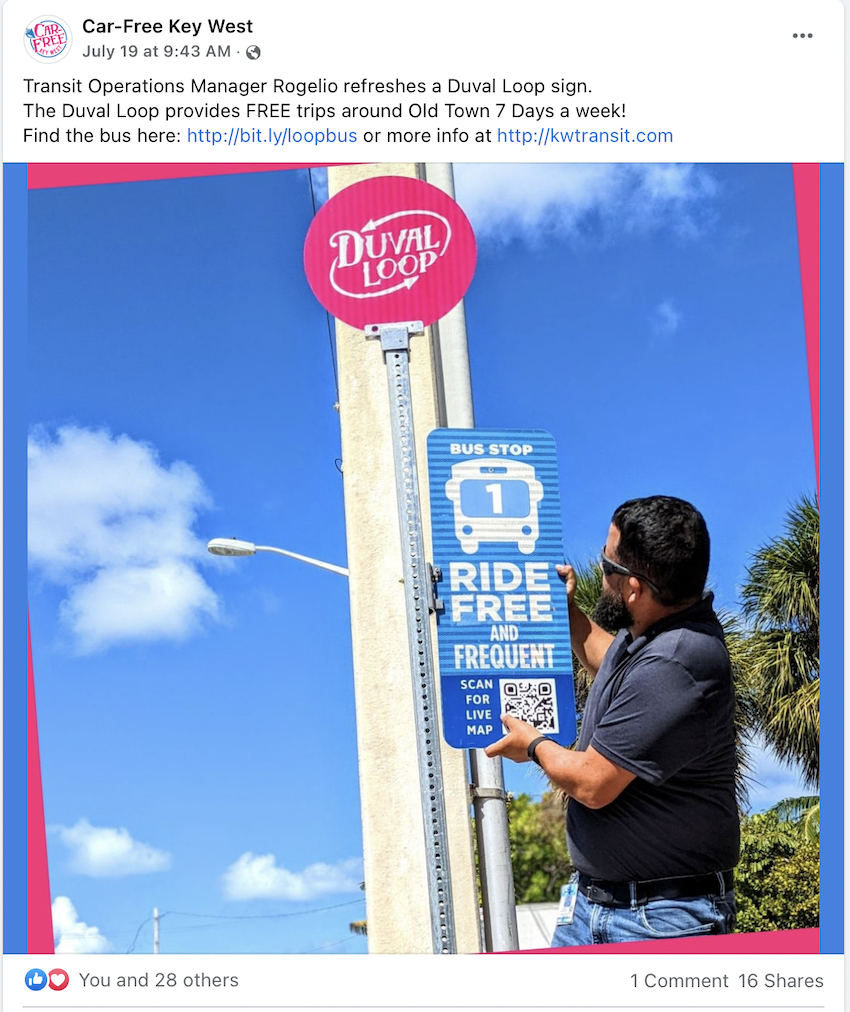 We applaud the staff for coming up with a nice interim solution now. Waiting another year or more for a big fix simply risked further deterioration of an already bad situation. Good for the staff on coming up with an inexpensive and innovative idea that didn’t need to be run up the flagpole so far that it got squashed by management or budget bean counters. Rather, it seems like a team of caring staff took some initiative and ran with it. We’d like to see more ingenuity and initiative to get something done like this on all kinds of little bike, walk, transit and streets for people issues around town. The drip, drip, drip of small wins will add up over time. So, let’s celebrate the little win on the Duval Loop signs. Nicely done City team!