As has been foreshadowed at budget meetings during the summer, Key West Transit made known at a public hearing on September 29 that its “Way Ahead” is to replace the North and South Lines and evening Duval Loop service with “On-Demand Transit” that they liken to Uber. Or actually, Uber-Pool, where the ride is shared. Customers would book a trip and be picked up and dropped off at bus stops of their choosing. Officials say the goal is to go live on December 20. Here’s a look at how we got here and how this may work.

Let’s Face It. The Service Being Replaced Is Awful

Everyone knows the Duval Loop is a success but the rest of the service within the city has been a disaster. In 2019, the last full year before the pandemic, more people rode the Loop than the four City routes and the Lower Keys Shuttle from Marathon to Key West combined. The then Orange, Red, Blue and Green City routes were circuitous, hard to understand and not very frequent. Coming back after a Covid shutdown pause, those four City routes were replaced on May 16, 2020 with two new, simplified North and South Lines that were easier to understand but had even more abysmal frequency. Each line had 10 trips in-bound per weekday and 10 trips out-bound meaning waits between buses were between 80-95 minutes. On weekends the service was even worse as there were only six trips a day in each direction with no service mid-day. 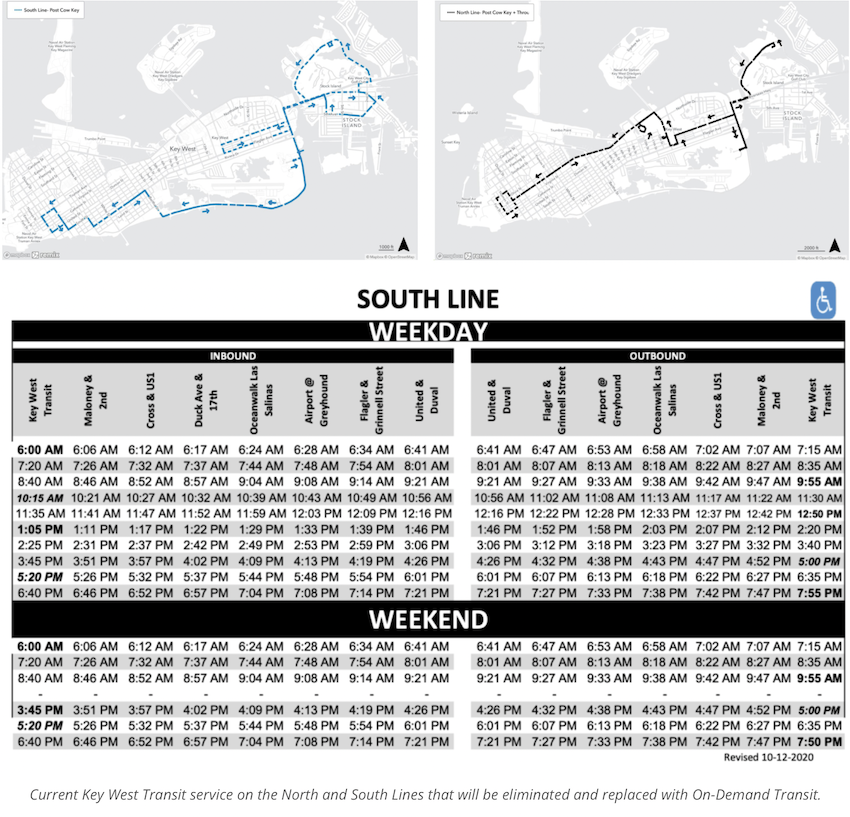 As a result, the two City North and South Lines ride around mostly empty. Census data shows almost no one in Key West takes the bus to work. A recent Strategic Plan survey rating 19 City services said not enough residents used public transit to give it a rating. So, no one is going to complain that the current service is being replaced, which was what the public hearing (PowerPoint Presentation and video) was about.

Key West Transit’s adopted 10-Year Transit Development Plan (TDP), the City’s Sustainability Advisory Board (SAB) and the City’s draft Key West Forward Strategic Plan all called for increasing investment in our public transit system by paying bus drivers more, increasing the abysmal frequency on all routes and moving towards free fares. Through many meetings and multiple processes, a consensus was built that improved public transit was vital for our future prosperity and environment and that this increased investment was the way to achieve that. Everything pointed towards Key West leaders making this happen. And then budget realities came into play.

In August, City Commissioners received the results of a year’s long compensation study conducted by Evergreen Solutions consultants comparing city salaries with the local market. City salaries have been said to lag those of Monroe County and local utilities, making it harder to recruit and keep workers. The recommendations included the City incurring an additional $2.8 million or $5,417 per employee annually.

So, we’re told that as much as the Mayor and City leaders wanted to finally invest in transit, the reality is that with this huge new cost in employee compensation needed, there was no wiggle room to find more money for transit. Mayor Johnston told us:

“Everyone in the City was disappointed that we couldn’t get to a goal of free and frequent Key West Transit service this year. We had wanted to get it to 30-minute frequency this year and eventually 15 minutes.”

“I have confidence and we have support on the Commission that we will continue to focus on making it easier for people to get to work by transit. As our workforce continues to move further away, we’ve got to provide free and frequent transportation service into the city, especially as new affordable housing opens up on Stock Island and further out.”

On-Demand Transit to the Rescue

So, without the additional money to add frequency, Key West Transit Director Rod Delostrinos believes going to On-Demand Transit will maximize his use of available drivers, expand coverage to more people on more parts of the island and restore full day service on the weekends. All without an increase in the budget or without an increase in additional driver positions. He said that

“This course of action eliminates running empty buses, reduces fuel use, and lowers environmental impacts such as continuous noise pollution and bus emissions along the same small area. One of the features of an on-demand transit system is an increase in system efficiency by maximizing bus capacity. This may lead to reassignment of operators to other routes such as the Lower Keys Shuttle. On-demand transit will better serve the public by reducing wait times, trip times, and expanding area coverage.” 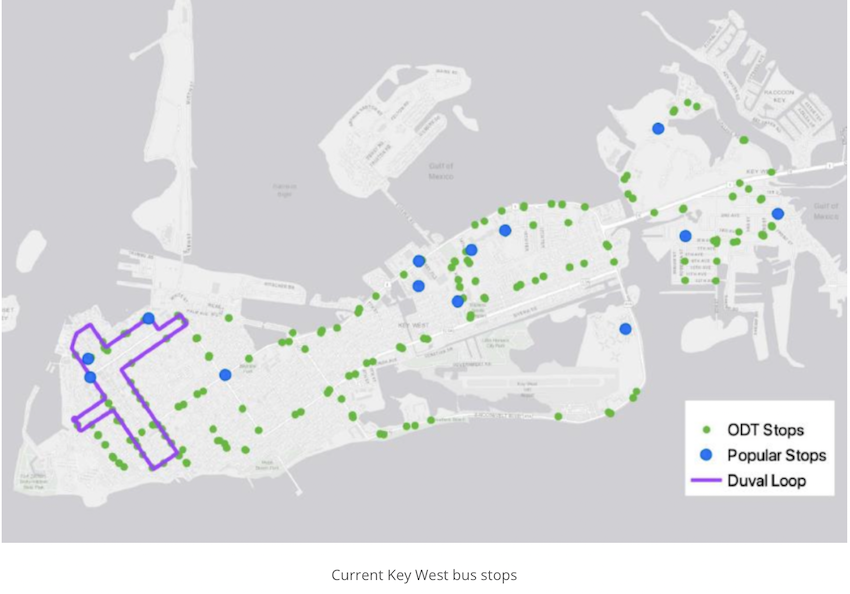 He explained that rather than having to run two buses constantly, regardless of the number of riders on the North and South Lines, if they could do with just one bus handling the trip requests, that’s okay. And if at certain times of the day because of demand, they need more buses, they can put those on because they’d be saving on drivers/buses at other times. During the summer budget meetings, the Transit Director said the efficiencies provided by going to this new system may mean that Key West Transit could expand the span of service to as late as 3:00 am, allowing for late shift workers to use it.

One example of efficiency for the customer we found instructive was from a participant in the public hearing (video of hearing). A Ms. Suzanne Roberts said she lived on Northside Drive and had to walk 8 blocks to Duck Avenue to catch her bus, as there’s no service on Northside Drive. She wanted to know how the new service would work for her. Rod explained that there we old bus stops on Northside Drive. So, she could book a trip and pick up the bus at the stop nearest to her house. The bus would then drop her off very close to her destination. No more having to walk 8 blocks.

Mr. Delostrinos tells us that the new system will come with lots of data. He said:

“The data collected from on-demand transit may indicate high ridership from one area to another on a particular portion of the day or week.  This information could be used to develop separate limited routes such as routes for local commuters.”

How On-Demand or Uber-Pool-Like Transit Will Work 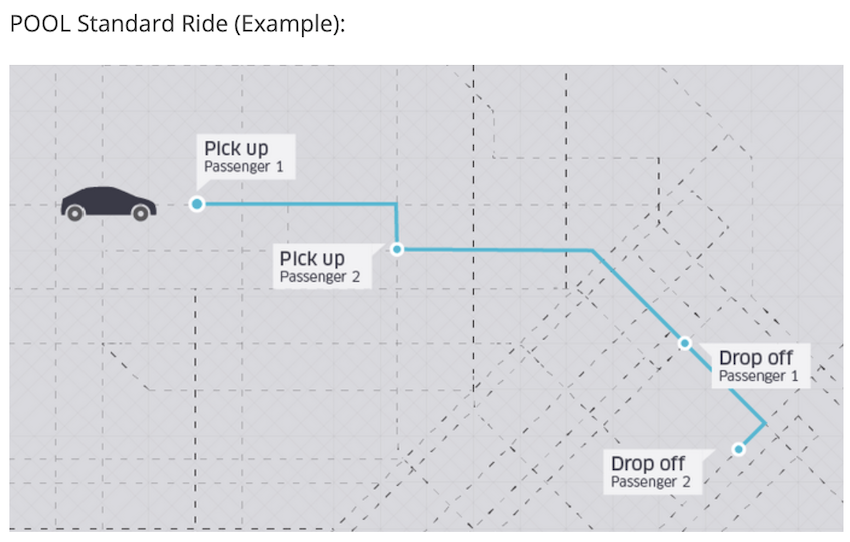 The North and South Lines and evening Duval Loop will be eliminated. Instead, the drivers and buses assigned to those routes will be available to take people anywhere they want to go, from bus stop to bus stop, anywhere in Key West and on Stock Island. All you really need to know is where the nearest bus stop to hop on is and where the nearest bus stop is to your destination. The maps on the app or online should make that easy.

If you’ve used Uber or Lyft before, this will be a breeze. For those without smart phones or online access, Key West Transit anticipates limited call center hours too.

Our Community Can Help Make this Change Work

While many folks would prefer that Key West Transit stick to the plan and add more frequency and additional routes per their 10-year Plan, since that isn’t in the cards for a while, the best thing for everyone in the community to do is get behind this change and help make it work. Key West Transit has a very small and lean staff. They don’t even have any dedicated marketing and outreach people, like nearly every other transit agency in the U.S.A. City Communications staff is stretched thin too. So, what can the community do? 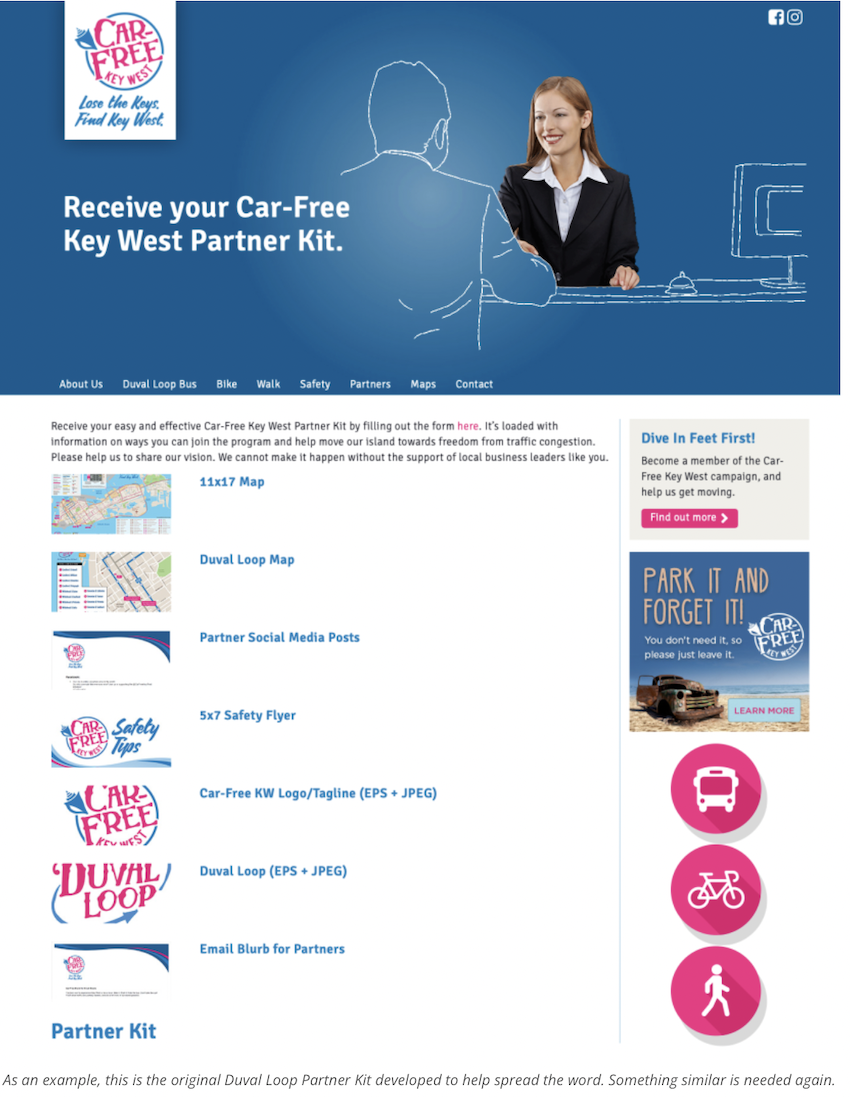 We can start by reviewing these 12 Marketing Things Key West Transit Can Do to Increase Ridership and asking the Key West Chamber, the Lodging Association, the Business Guild, the Attractions Association, the Citizen newspaper, the Keys Weekly, other print, KONK Life and other online media and major employers, non-profits, and Mom and Pop Shops to all pitch in and promote the service to their customers and employees.

In turn, the City and Key West Transit need to make it easy for all these organizations to pitch in by providing easy to download, print and share documents, flyers, brochures, posters, emails, apps, social media posts and the like that show how easy it is to use the new On-Demand service and also promote the Duval Loop and Lower Keys shuttle. This all needs to be in one spot on the web that is easy to find.

So, let’s wish Key West Transit the best of luck in rolling out this new service and let’s go a bit further by pitching in to do what we can to help too. If Key West Transit is more successful, our whole island wins. 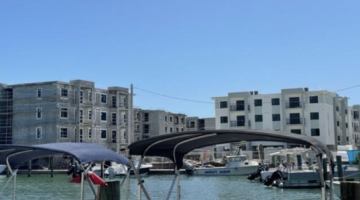 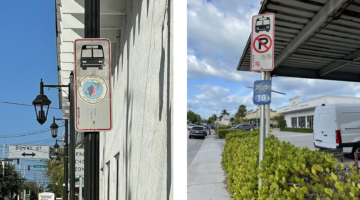 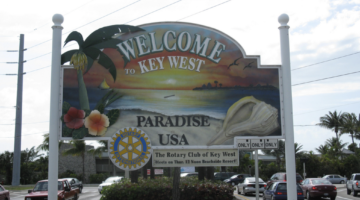