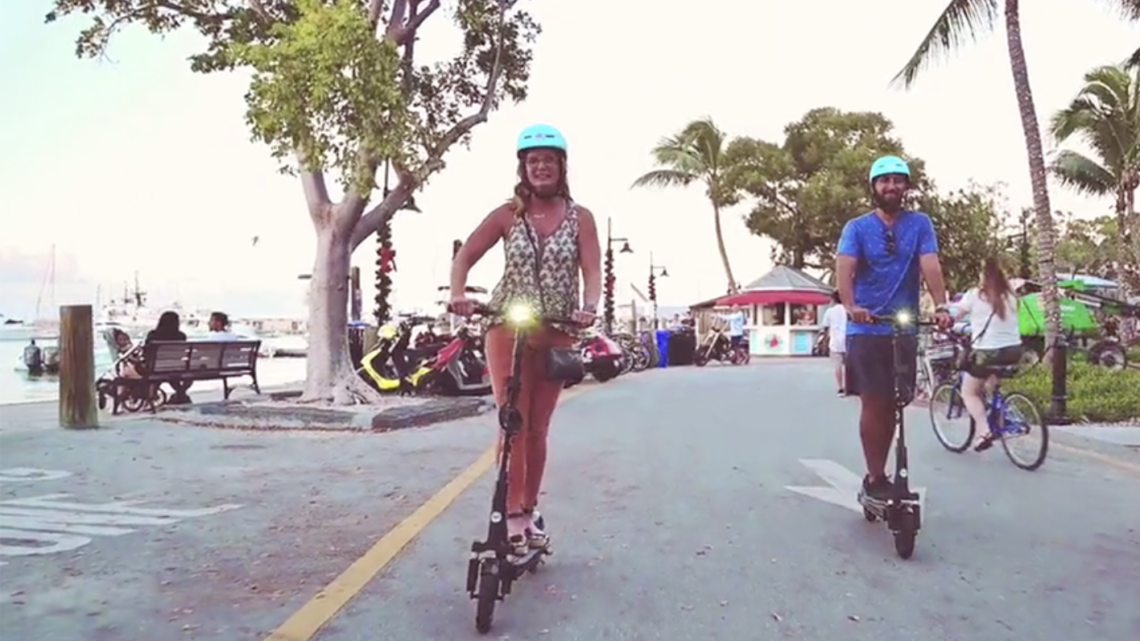 On Monday, I downloaded the app and signed up for the system in just a few minutes. I walked up to the sleek modern kiosk at Santa Maria Suites and tried it out for myself. Wow. The system is elegant and intuitively easy to use. Once on the sturdy scooter I was zipping around town with ease. I felt safe and it was fun too! I can imagine visitors thinking the same.

This project only exists because it got a special exemption as a 48-scooter pilot. It needed the Commission authorized waiver because the City has a moratorium on rentals of new recreational vehicles like these going on two years. And the moratorium is likely to last at least another year as officials await a “mobility study” whose’ RFQ hasn’t even been released yet. Oh, there’s no such moratorium on new rental cars. Hertz, 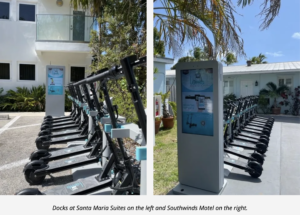 Enterprise, and others can expand their fleets at will. Local officials who profess to be green, care about our environment, and want people to use alternate modes of getting around need to stop this nonsense and allow companies to bring innovative transportation options to our little island, especially as our bus service is so moribund. Let’s explore the wonderful Lama Mobility system and discuss why we need more innovations like this. 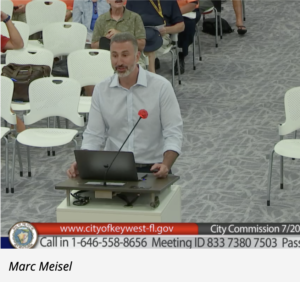 Mr. Meisel saw a need to provide his guests with another alternative to get around in addition to the bikes they rent. But he realized that dockless scooters, which traditionally operate with the pickup and drop off transaction conducted on the street via an app, has been problematic in other cities. In fact, Key West doesn’t allow these kinds of operations in the City right-of-way, which has been the Achilles heel of several other failed attempts at Key West based private bikeshare, public bikeshare and Zipcar carshare.

In other cities across the country, traditional dockless rideshare e-scooter programs like Lime, Spin, Bird and Lyft, operate when a customer sees an e-scooter on the street and then uses an app to unlock it and go. Lama Mobility was designed to operate as a round trip rental, like the way bicycles are rented traditionally from a storefront or as we often see here in Key West, at a hotel.

Mr. Meisel said their system was designed this way because one of the biggest complaints of electric scooters in other cities is the problem of abandoned scooters’ littering sidewalks, parks, and other public spaces. The other problem is keeping those scooters charged.

By creating docking stations where the scooter is charged while it’s parked, it solves the charging problem. Putting the docking station on a hotel property where the user picks up AND returns the scooter to the station means they won’t be left somewhere else. That takes care of the problem of “abandoned” scooters littering sidewalks and it solves the Key West specific problem of moving the transaction off the City’s right-of-way too.

Simple, Elegant, and Easy to Use

On Monday, I met Chris Casto, Lama Mobility Support Crew for Key West, who walked me through the system and accompanied me on a ride around town. Chris has lived in Key West since he was 8-years old and is excited to bring a new form of eco-friendly transit to our island.

Here’s how it works:

Watch this video to see how the company explains the customer experience.

With the weight of the scooter in the battery at the bottom, the scooter feels grounded and sturdy. The footboard is wider than most scooters too – which makes it easy to get steady footing. You must push the scooter a bit before the throttle will engage, preventing it from jumping away from you. Using the throttle and hand brake are very intuitive. Within minutes I felt comfortable keeping up with traffic, weaving around potholes and stopping and starting. And no sweating!

Safety Education Built In and You Must Be 18 to Ride 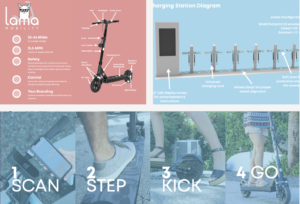 While we were riding a mom and two teenage kids asked where they could get these. Chris was quick to point out that one must be 18 years old to use the system. When you download the app, the next step is to take a front and back picture of your driver’s license and then a selfie. Within a few seconds, the system verifies you have a valid permit and verifies you are the person with that license. This prevents fraud and is a good safety feature.

Safety education is built into the system so that riders are readily aware of how to operate the scooters and of the rules of the road. The app walks users through instructional/safety information and videos. That same information is then displayed on the charging rack monitors. There are bright front and back lights on the scooters, a loud bell and the device can’t go more than 15 mph. All users must be 18 years of age.

No Riding on Sidewalks

As most of us are now aware, Key West prohibits e-bicycles and e-scooters on sidewalks. Except on the Multi-use paths or promenades on North and South Roosevelt, Bertha, and Atlantic. As part of the safety education and rules of the road on the app and at the station, Lama stresses to customers that you aren’t allowed to ride on the sidewalk. One gets the message loud and clear.

These cool scooters have a feature that allows the company to put a virtual fence around an area where the Lama scooter won’t be able to operate. For example, there’s a block of residential homes behind one of the hotels that asked for this. In theory it would allow the City to ask Lama to say, restrict the maximum 15 mph speed of the vehicles in certain zones. For example, if wanted, you could set the maximum speed at 10 mph for heavily used areas like Duval Street. Or you could even have the scooter not be able to operate when it hit a certain zone like Mallory Square where you don’t want them mixing with pedestrians.

What’s the Future for Lama?

Right now, Lama Mobility is focused on the project and gathering data about how their system is used. Something they’ll share with the City. But one can envision a future where Lama docks are installed at parking lots and hotels throughout Key West, enabling more people to participate. We asked Mr. Meisel what he expects in the future and here’s what he had to say:

“It always amazed me to see so many people come to Key West and either rent a car or drive down and not leave the car in the hotel’s parking lot. One of the allures of Key West for tourism is that Key West is a small area with a lot of things to do and places to see, which makes it very convenient to use a bicycle or e-scooter to get around. Sometimes tourists look to squeeze in a lot in a short period or go distances that it doesn’t make sense to walk. Locating Lama Scooters at hotels gives hotel guests a convenient, environmentally friendly way to see and do more while discouraging hotel guests from using automobiles. Hotels hosting Lama Scooters yield a competitive advantage by offering guests a unique amenity that increases the interest in booking that hotel while promoting overall guest satisfaction.

Lama Mobilities’ self-service round trip rental platform allows hotels to host this amenity without any drain on operations or the need for hotel staff to provide any support except hand-out helmets. We look to expand our offering to include standard pedal bicycles for guests interested in getting around more traditionally way. Bicycles will also feature our self-service platform, allowing riders to rent and return the bikes via the same Lama Mobility cell phone app, automating the rental process.

We hope that the City of Key West and other hotels see the benefit of our electric kick scooters and bicycles, reducing cars on the road while allowing tourism to thrive in an eco-friendly way.

Key West is just the starting point for Lama Mobility. We look to expand our round-trip rental program in other vacation markets throughout the United States.”

We like the way Mr. Meisel thinks. In fact, we asked Chris if the same kiosks could be used to dispense bicycles and he noted that Marc, as he says here, was already thinking of that. If Lama Mobility were to spread throughout Key West and its racks dispensed both bikes and scooters, that could be a game changer in providing choice and ease of getting around.

Lama Is Part of the Solution 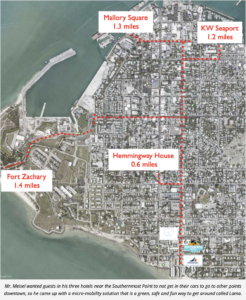 Recent research from Carnegie Mellon University, among other sources, shows how replacing short car trips with bike and scooter trips can lead to less congestion. Getting people out of cars and into quiet, eco-friendly alternatives like the Lama e-scooters is a good thing. It nicely compliments efforts like the Duval Loop. It makes our downtown a more friendly, green, and prosperous place.

Our question is WHY isn’t City Hall expediting these kinds of programs instead of overregulating them? Why aren’t we putting in more bike racks and bike lanes? Why aren’t we pedestrianizing more downtown streets? Why isn’t there more frequent transit? And why aren’t we properly managing our parking so that we direct short-term parkers to meters and longer-term visitors and workers to long-term lots and garages instead of letting them park for free in our neighborhoods? All these things, including e-scooters, would make our historic downtown and whole island healthy, green, sustainable, equitable, prosperous, affordable, and happier too. Thanks to smart people at Lama Mobility like Marc Meisel and Chris Casto, we’re making progress.