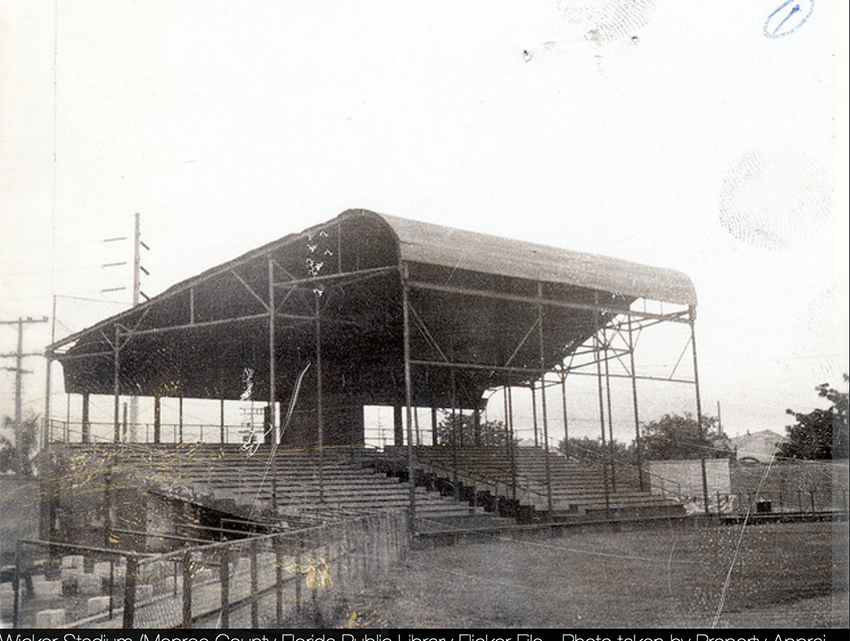 What do a new bike trail segment and professional baseball in Key West have in common? Well, if you know where MLB affiliates for the Padres and Cubs – named the Key West Padres, Sun Caps, Conchs and finally the Key West Cubs, who played in the Florida International League from 1969 until 1975, then you know where the new trail is going.

Still don’t know it? While most of the old stadium is long gone, locals, especially parents and their kids, now know the area as Wickers Sports Complex between 14th Street, Kennedy Drive, Flagler Avenue and Poinciana Elementary. The cool news is that a new two-way bike trail, an important connecting segment of the Crosstown Greenway, is scheduled to be constructed by the time school starts in September 2022. 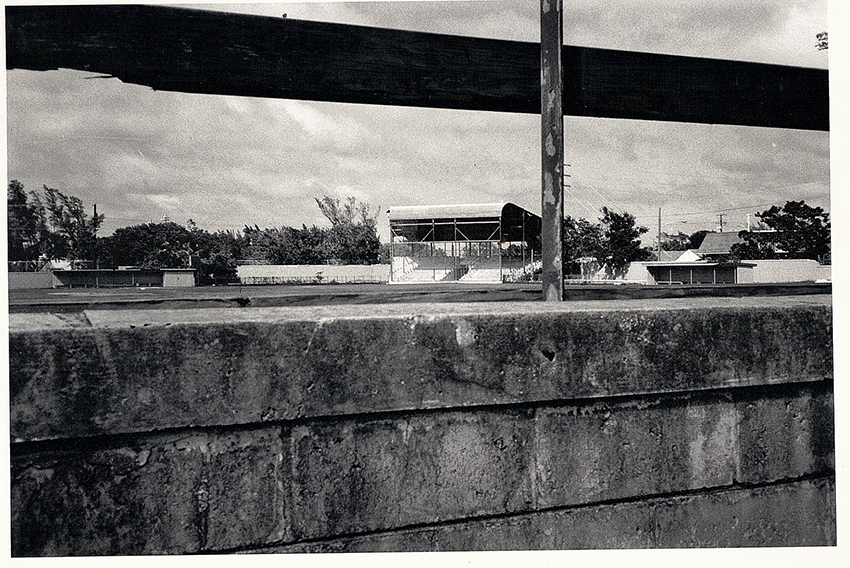 A few weeks ago we brought you a story about planning starting during the next 12 months on the Smathers Beach and Salt Ponds Bike Trails (What’s Old is New Again – Two New Bike Trails Take Us Back in Time to a Simpler Key West; April 30, 2021). These two bike trails, like the Wickers Trail Segment, are being pulled of the City’s Key West Bicycle and Pedestrian Master Plan, adopted in 2019. We applaud the City’s Multi-Modal Transportation Coordinator Tim Staub for trying to get a mix of short-term and longer-term projects planned and constructed so that we get some quick wins on the ground now, next year and in each of the upcoming years after that.

Mr. Staub has outlined all of this in a recently released, easy-to-read Transportation Report 2021 that outlines what he and others on City staff are prioritizing to do regarding transportation in the next 12 months. There’s a dozen plus planning, construction and service projects mentioned covering bike, walk and transit from the respective Bike/Ped and Transit Plans. We found out about all of these trail projects from this document and hope to highlight more of what’s in it over the next few months.

Commissioner Davila Nails Why This Project is Important

When asked about this project because he’s known to be a fan of it, Commissioner Gregory Davila said: “The Wickers Bicycle Trail is vital to improving the safety for our residents. Currently, bicyclist and pedestrians have to cross two parking lots in order to travel between Duck Avenue and the current bicycle path that runs between Kennedy Drive and 12th Street. That’s just not safe. It only makes sense to improve that area with a dedicated path. The space is there to make this happen.”

A Key Segment of the Crosstown Greenway

The Wickers Bicycle Trail is a key segment in the 3.5 mile long Crosstown Greenway. The Greenway is the City’s main bicycle focus over the next few years as it can more safely carry east to west bicycle traffic through the heart of the city, than North and South Roosevelt Boulevards as bicycle routes. Phase 1 of making the Greenway a more established route was completed last fall (Volunteers and a Little Green Paint Show How We Can Make It Safer to Bike; February 1, 20201).  A Phase 2 of the “Volunteers with Paint” project will happen sometime this year. 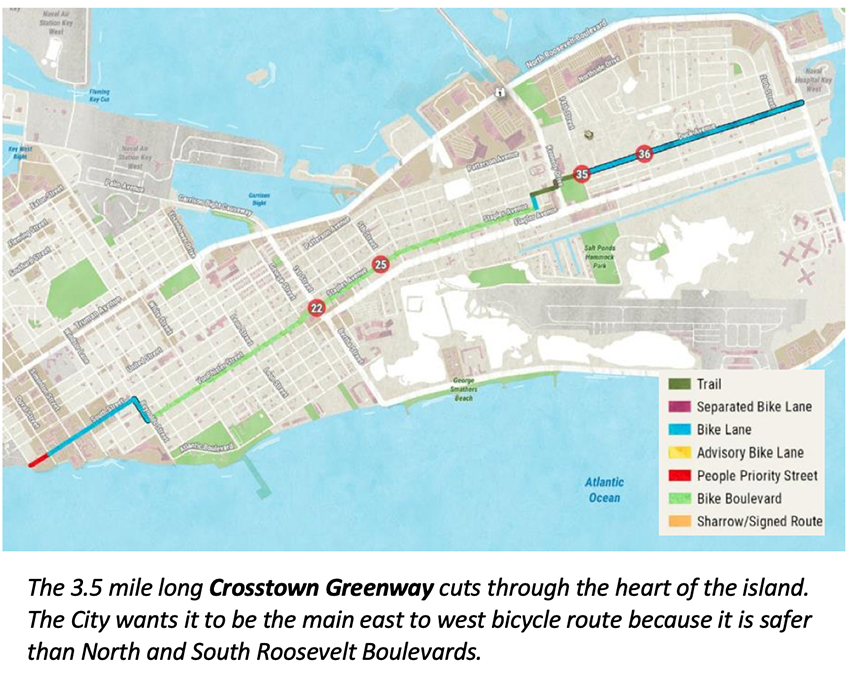 A robust central bicycle route (the Greenway) is a major element in both the Bike/Ped Plan and Comprehensive Plan. For the Crosstown Greenway to obtain its promise though, there must be bicycle centric infrastructure and connectivity along all of it. Thus, the importance of this project. 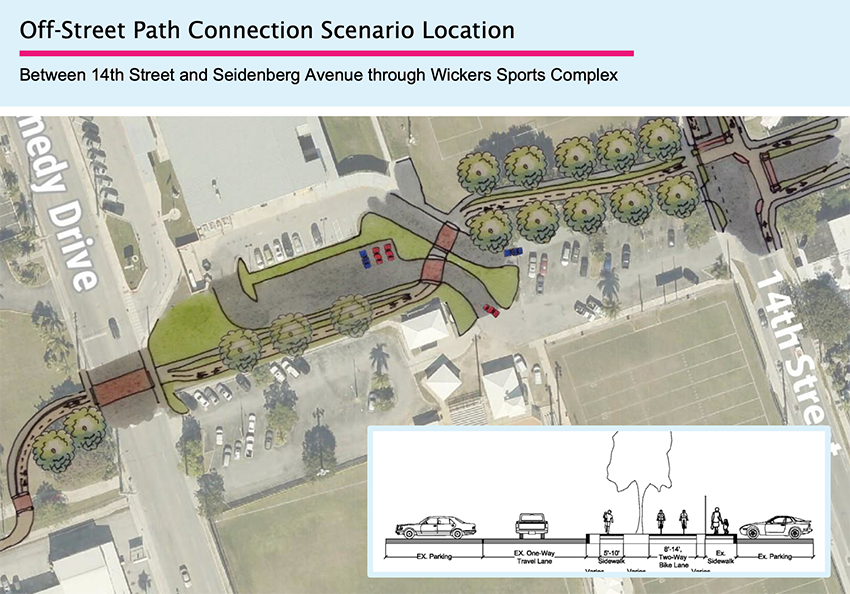 As bikers travel the Greenway north on the Seidenberg Avenue Trail – the concrete cut-through path from Seidenberg Avenue between 12th and Kennedy (the subject of a fun upcoming story) – bicyclists are met with four lanes of car traffic on Kennedy and then have to navigate two parking lots serving Wickers Sports Complex and Poinciana School before coming to Duck Avenue at 14th Street.

The new trail will link Duck Avenue with the Siedenburg Avenue trail, aligns them better with the intersections and improves the crossings of Kennedy Drive and Glynn R. Archer Jr. Drive. In addition to improving mobility, the area suffers from flooding from normal rain events. So, bicyclists will now be able to avoid sloshing through a huge lake every time it rains.

According to the design recommendations for the trail in the Bike/Ped Plan, the City hopes to:

All of this is shown in the preliminary drawings here. This project is the first portion of the Wickers Sports Complex update that will be occurring over the coming decade. Mr. Staub notes that the design of this project is still in the works, but if all goes as planned, it should be contrasted prior to start of school in September 2022. 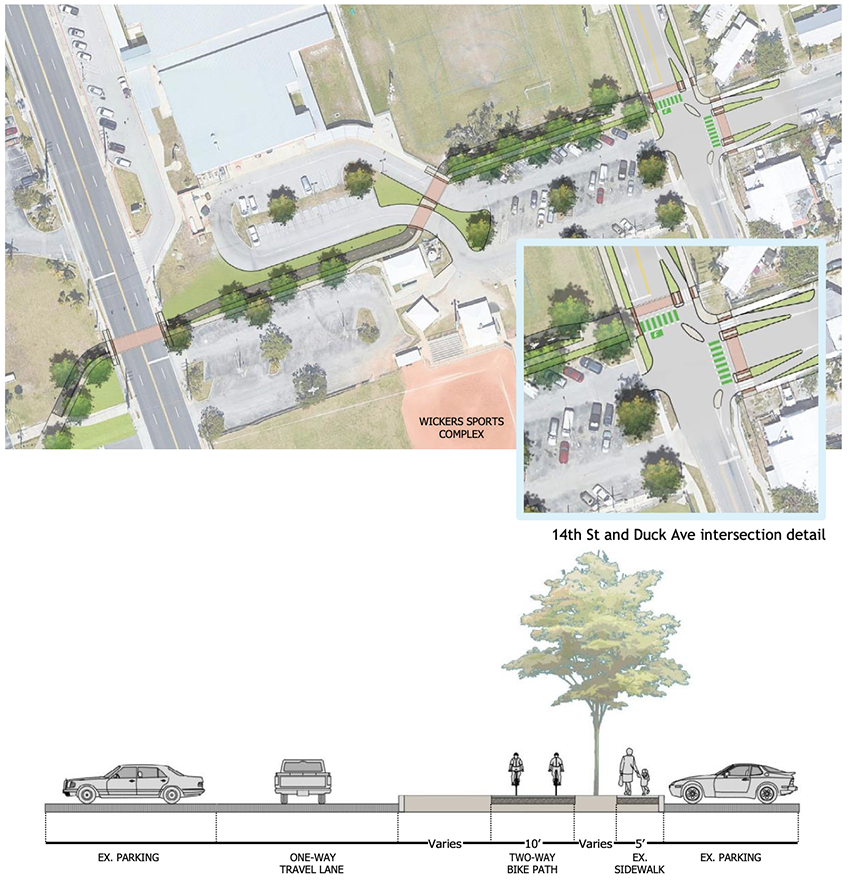 Taken all together, Phases 1 and 2 of the “Volunteers with Green Paint” projects and the Wickers Field Trail segment on the Crosstown Greenway and the Smathers Beach and Salt Ponds Trails gives us hope that the City is finally turning the corner on implementing the promise of the Bike/Ped Plan and making it easier and safer to bike in Key West.

Our island is small, flat and warm. Perfect for biking year-round. So, our focus as a community should be on getting more people to bike by investing in bike infrastructure because it’s cheaper than accommodating more cars. The City should be applauded for taking these initial steps in the right direction and encouraged to do even more, faster because in doing so we can make Key West America’s bicycle paradise.

Oh, and next time you are riding your bicycle through the Wickers Sports Complex, see if you can spot the remnants of the old Wickers Stadium and a fun part of Key West’s days of yore.