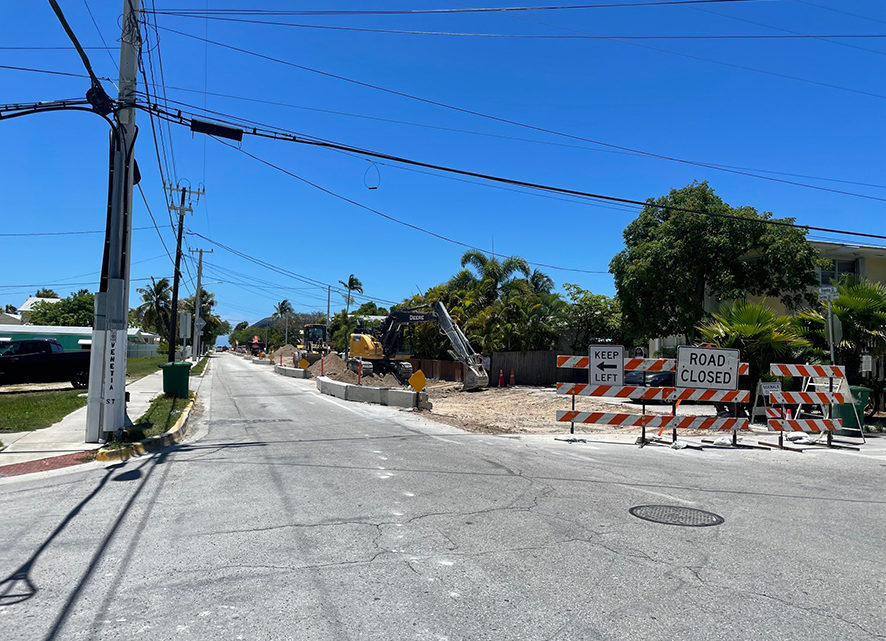 Monroe County is in the middle of a year-long construction project to rebuild the First Street/Bertha Street corridor, a major thoroughfare that crosses the entire island, Gulf to Atlantic. The City’s Bike/Ped Plan indicates that this “High Stress” corridor should get a trail and protected bike lanes. Rebuilding the street from the ground up is the perfect time to construct these recommendations. But nothing of the sort is happening, mostly because of the desire to save some little used parking spaces. Alas, our island’s leaders will be letting another major street rebuild go by without noticeably improving conditions for bicycling. That’s a shame.

Think about it. During the pandemic the City rebuilt Duval and Simonton Streets between Truman and Front Streets. When they put the top layer of asphalt on and repainted these streets, they didn’t enhance the streets for bicycles or pedestrians. No new bike lanes. No new pedestrian crossings. Just the same old nod to our car-convenience culture and plenty of parking spaces for private autos, just like before. Unless something drastic happens, despite the best of last-minute intentions, we may see the same thing happen next year when they start rebuilding S. Roosevelt Boulevard (City Commission Tries to Have Its Cake and Eat It Too on S. Roosevelt Blvd. – Perhaps Dooming a Safer Project May 7, 2021).

According to the Federal Highway Administration “The best time to create bicycle lanes is during regular street reconstruction, street resurfacing or at the time of original construction.” FDOT, County and City engineers will all tell you the same thing too. So, since they haven’t put in the final layer of asphalt on this project, is it too late?

The Project We’re Getting

The project is being broken up into three logical phases. Bertha Street between S. Roosevelt and Atlantic Boulevards. Bertha Street between Atlantic and Flagler Avenues and First Street between Flagler Avenue and N. Roosevelt Boulevard where it connects with Palm Avenue to whisk you downtown. (Oh right, the Palm Avenue Bridge was rehabilitated last year with no improvements to the bike or pedestrian infrastructure, but we digress.) The middle phase, Bertha between Atlantic and Flagler, is currently under construction.

Here are the Phases/Sections, the current conditions and what is planned: 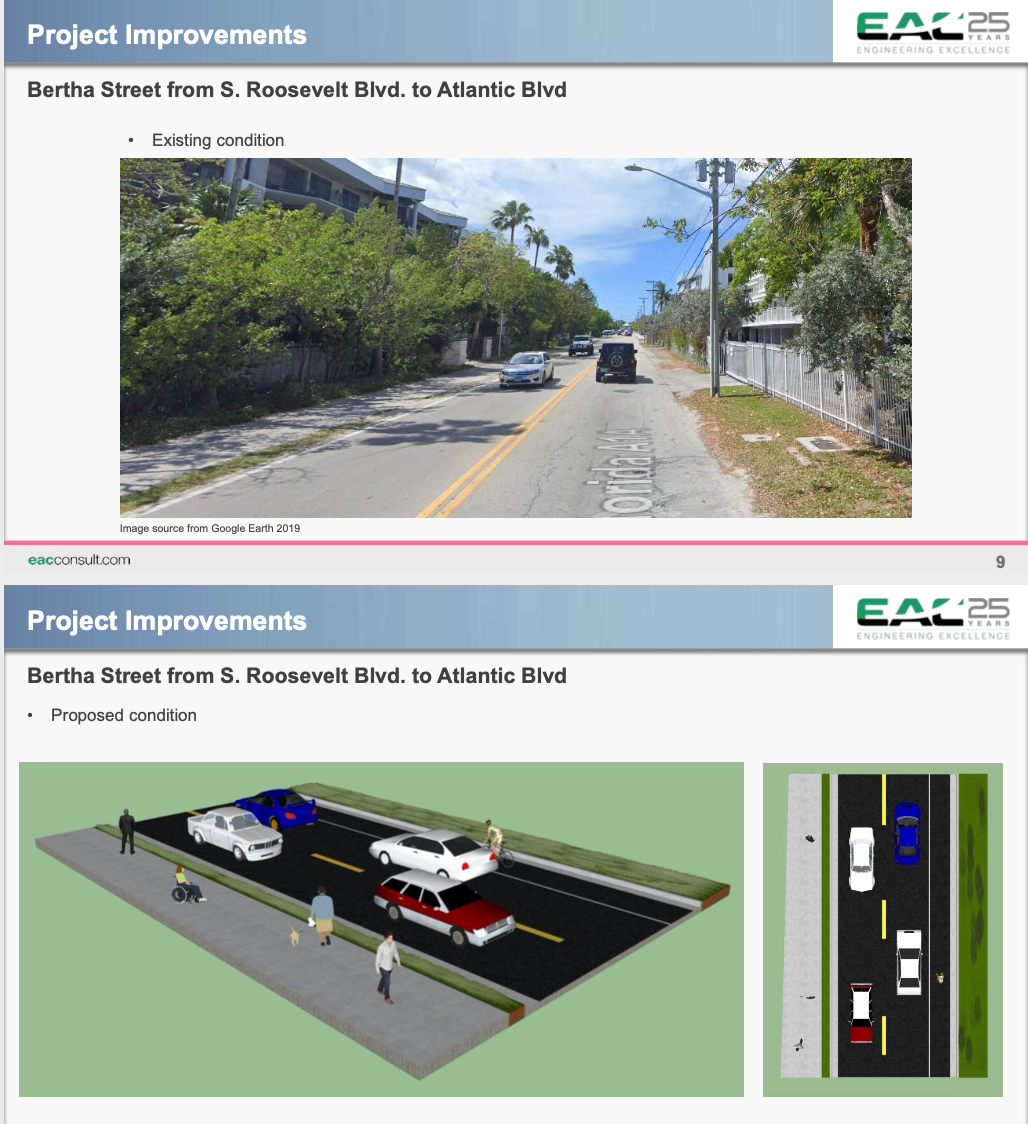 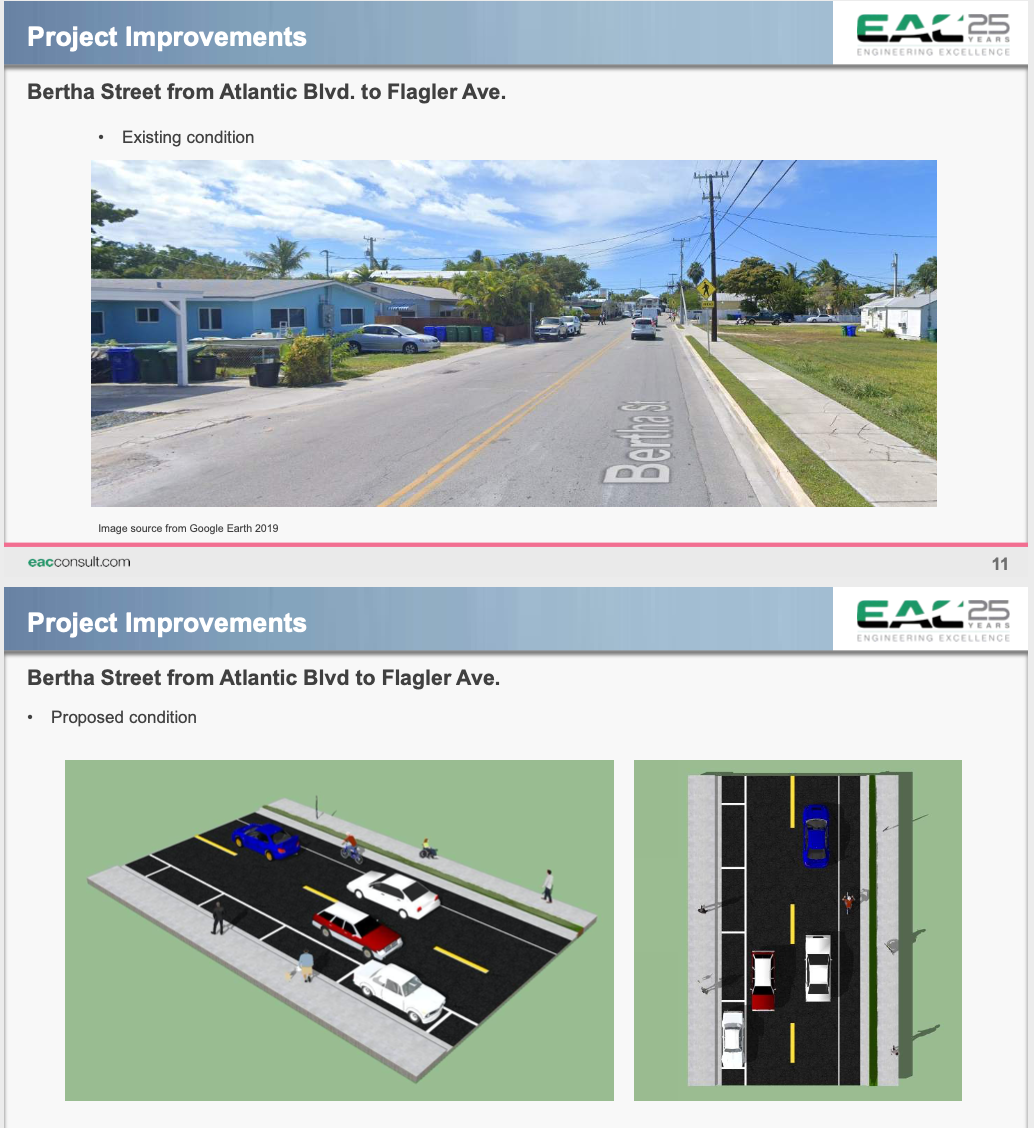 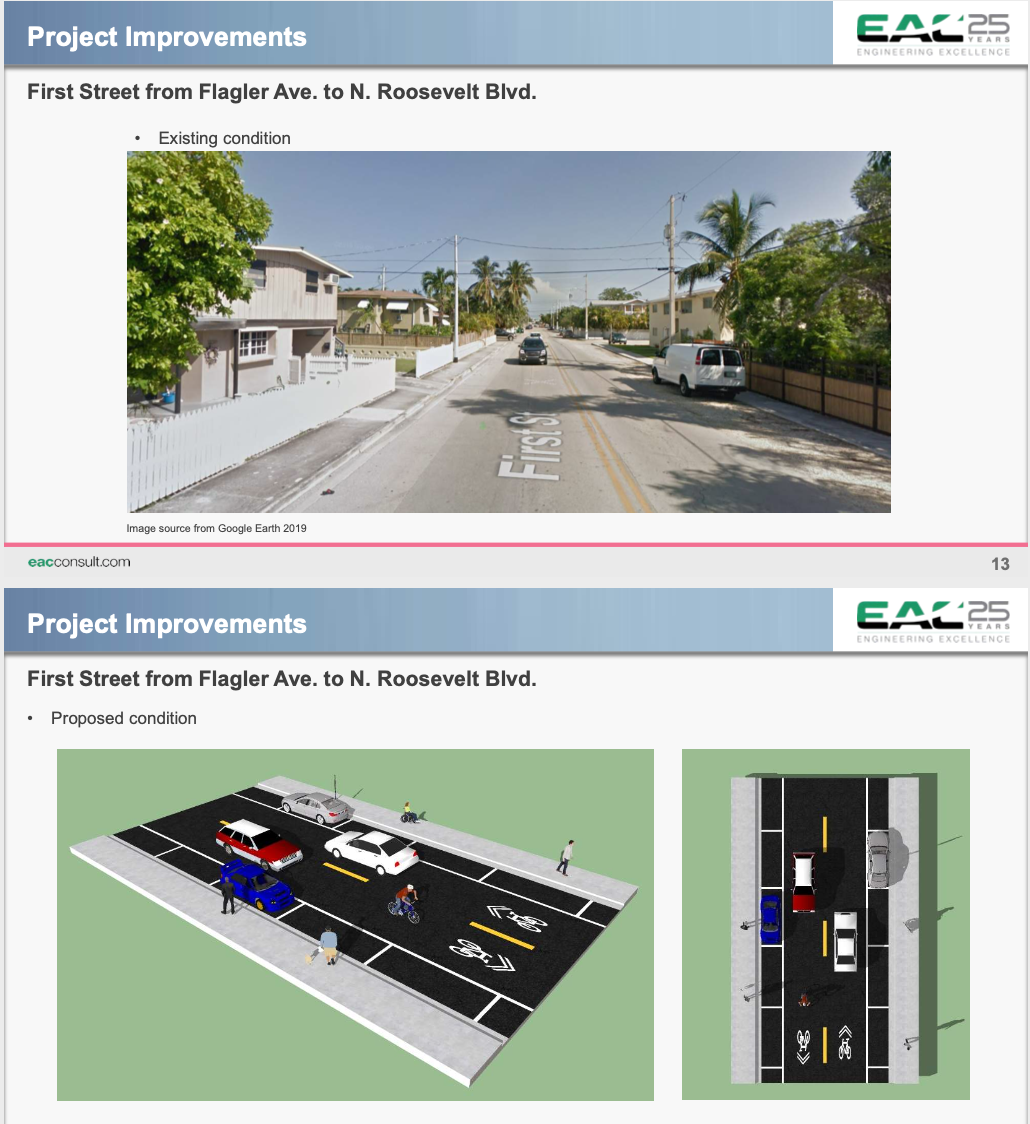 One of the good things everyone is getting out of this project is a stormwater management system, including backflow prevention devices, that will fix the drainage problems on this corridor. That’s a big deal, because the multi-use bike/ped path on Bertha between S. Roosevelt and Atlantic floods regularly, often forcing people on bikes into the car traffic.

The multi-use bike/ped path on Bertha between S. Roosevelt and Atlantic we’re told is currently anywhere between 8 and 9 feet wide. After the project is done, this will be 10 feet wide. That’s better.

Wider is not better on car travel lanes though because wider travel lanes induce cars to travel faster. Thus, studies show them to be less safe than narrower travel lanes. So, we think it is admirable that this project is narrowing the travel lanes on Bertha from 14 feet wide to 11 feet wide.

With the extra space taken from reducing the width of the car-travel lane, the County will install a bicycle lane in the westbound or Atlantic to Gulf direction between S. Roosevelt and Flagler Avenue.

176 Bad Things About This Project

Okay we exaggerate. Just a bit. But it feels like 176 things. Here’s ten missed opportunities or bad things about this project:

Bad Thing #1: It Doesn’t Do What the Bike Plan Says Should Be Done

What’s the point of holding community meetings, doing the field work, and making recommendations if someone is simply going to ignore two years’ worth of planning work? It is maddening! Check out pages 33 and 34 and 74 of the adopted Key West Bicycle and Pedestrian Master Plan. It clearly shows that on Bertha between Atlantic and Flagler and on First between Flagler and N. Roosevelt there should be bike lanes installed in the street in the short-term and that, when possible, a trail should be constructed on First Street and protected bike lanes on Bertha between Atlantic and Flagler. The perfect time to construct the preferred recommendation. You got it. When they rebuild the road. 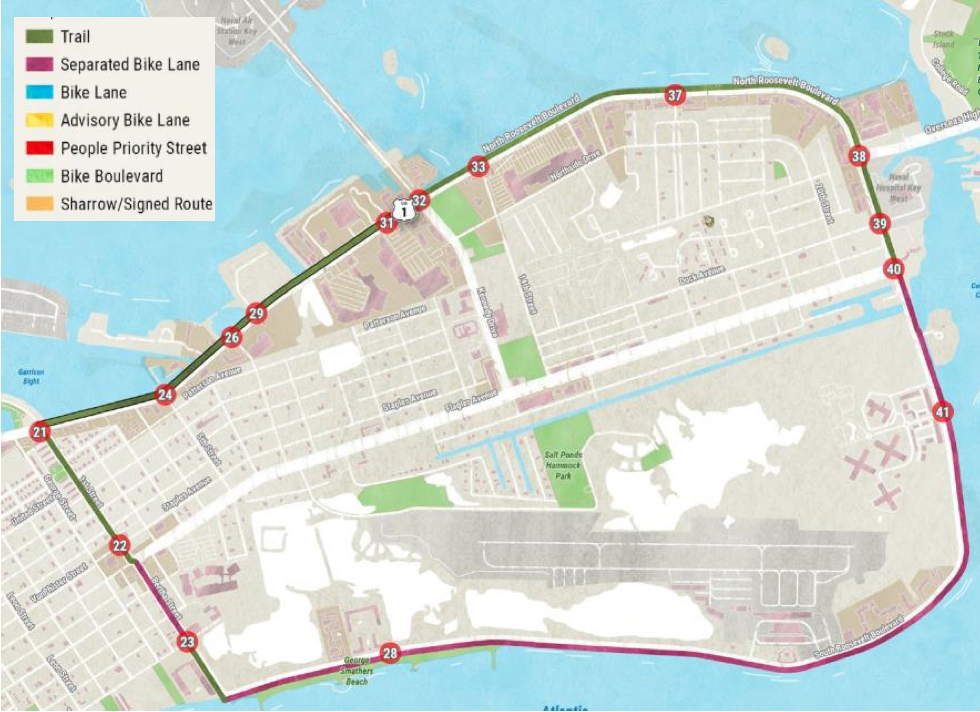 Bad Thing #2: There’s No Westbound Sidewalk on Bertha Between N. Roosevelt and Atlantic

Why isn’t there a sidewalk instead of grass on the La Brisa side of the road?

Bad Thing #3: A Bike Lane on Only One Side of the Road?

Why is west-bound Bertha worthy of a bike lane and not east-bound? What’s going on with that?

Bad Thing #4: The West-Bound Bike Lane Doesn’t Connect to Anything

Nothing is worse than a bike trail that begins and ends without a safe way to continue on to your destination. Or a bike lane that is truncated. This bike lane doesn’t connect to a bike lane on S. Roosevelt, and it needs to connect through the intersection at Flagler and then continue on to First Street. It’s just this little piece of infrastructure that says we really haven’t thought this through.

The reason there’s only a west-bound bike lane instead of protected bike lanes in both directions as the Bike Plan calls for is because someone at the City decided saving a few parking spaces on one-side of Bertha was worth more than bicycle safety. The sad fact is that these spaces are little used, and all of the properties have driveways.

Bad Thing #6: No Change on First Street. None Whatsoever

There are no bicycle improvements on First Street. That is unless you count painting Sharrows in the middle of the street as an improvement. Says long-time bicycle advocate Tom “The Bike Man” Theisen: “First street is a disaster, why keep those few parking spaces and loose a full-on bike lane and corner visibility? They need to remove all parking on both sides and create safe bike lanes. We all salmon up George and their plan does nothing for us.” We agree.

Why is this? So that they can maintain the existing parking that no one uses. The housing along this stretch either has its own huge parking lots (George Allen Apartments) or the single-family homes all have driveways. Look at the pictures in the County presentation, go to Google Maps Street View or take a ride down the street yourself. Very little of the parking spaces are used. Obviously, this was noticed when the Bike Plan was produced and that is where space for a bike trail was to come from. They County told us it was the City that made the decision on the parking. The City referred us to the County for information about the project. Hmm…

Bad Thing #7: Swimming with the Salmon on George

The Bike Man brings up a point. If bicyclists are afraid of using First Street, which they generally are because of the heavy traffic, and total lack of bicycle infrastructure, they salmon up George Street as an alternative. For those not in on the lingo, salmoning is a term for bikers who ride the wrong way up a one-way street or bike lane. George parallels First Street between N. Roosevelt and Flagler but is one-way in the east-bound direction. One thing the City could do is get rid of the parking on George and put in a two-way bike lane. But there’s the rub. In order to do this, they’d have to sacrifice some parking and we know our leaders will never do that. So, if they won’t fix First Street or George than there’s no safe way to get from one side of the island to the other.

Bad Thing #9: There’s No Bike Infrastructure at the Bertha/Flagler/First Intersection

The intersection where Bertha Street, Flagler Avenue and First Street all meet is a difficult one because First Street and Betha Street aren’t directly across from each other. Intersections are always where the most crashes occur, especially for bikes. It is that way because even when there is bicycle infrastructure, like a bike lane, the engineers don’t design the bikeway all the way through the intersection. This project is no different. There’s absolutely NO consideration of how bicycles are supposed to safely travel through here.

Bad Thing #10: The Corridor is a Disconnected Mess

Picking back up on connectivity, one of the main reasons people cite for not riding a bicycle for transportation is the lack of a connected network of easy, safe, recognizable bicycle infrastructure. There are Sharrows in both directions on First. There are Sharrows in one direction and a bike lane in the other on Bertha between Flagler and Atlantic. And there is a multi-use path on one side with a bike lane but no sidewalk on the other side of Bertha between Atlantic and S. Roosevelt. That’s a disconnected mess. No network effect. 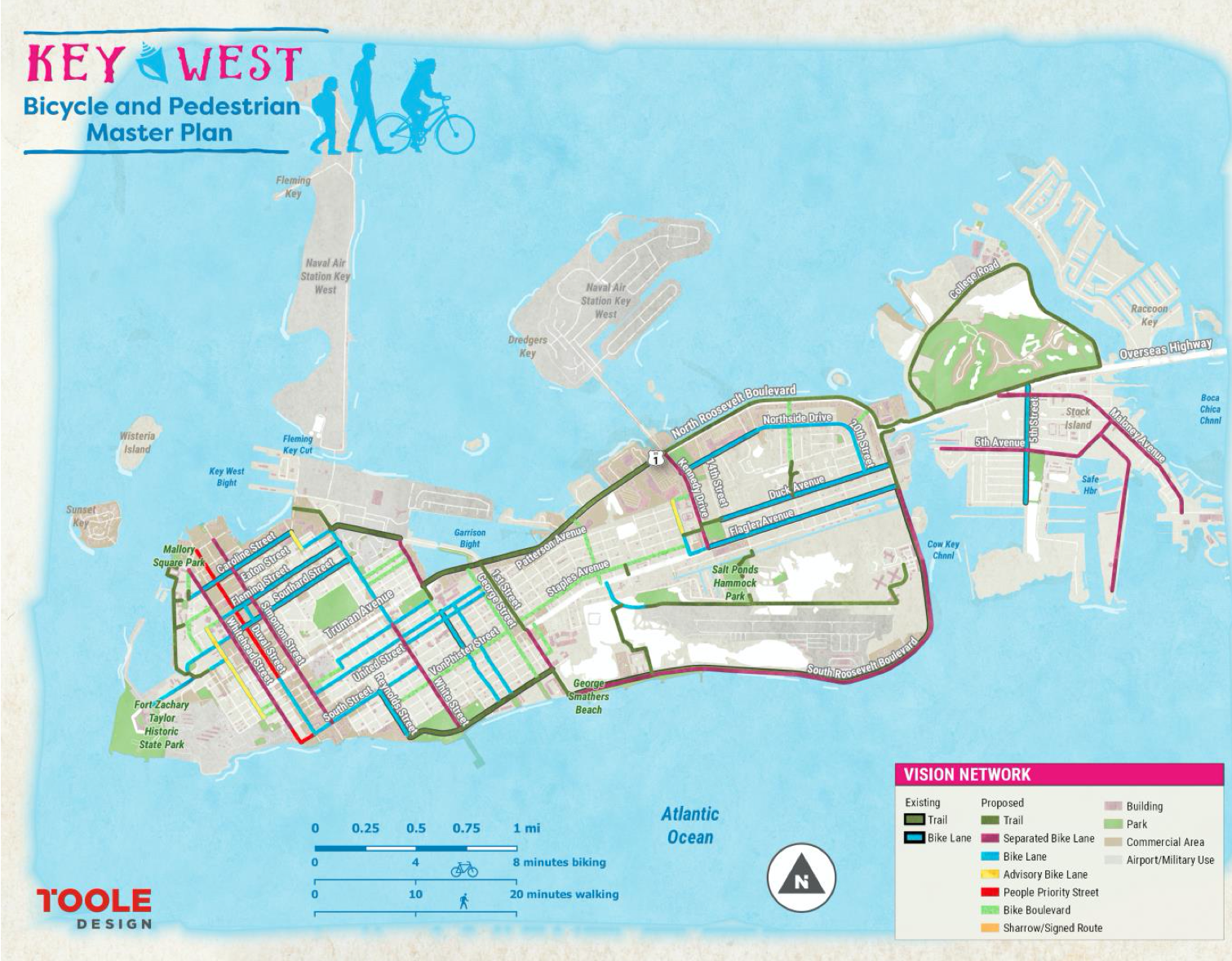 This is a Monroe County project, but they tell us the City of Key West Engineering Department had input and made the decisions on parking that ultimately have made this project another disappointment for people on bikes or who want to bike. None of the four well known bicycle advocates we contacted said they’d ever been asked for input nor heard of opportunities to do so. Either did we.

Our island is flat, compact and warm. Perfect conditions for bicycling. And yet only 12 percent of us commute to work by bike. If the City is serious about climate change, sustainability, health, equity, small business prosperity and yes, happiness, we need to do better. Time after time our leaders have failed us because they always make the easy choice to bow to the predominant, mainland attitude that cars and parking rule. We only seem to do bicycling when it fits in with and doesn’t inconvenience those mainland car values.

We need to double down on the opportunity to make Key West a bicycling paradise. The easiest and most cost-effective time to build on that promise is when we reconstruct our roads and streets. For this First and Bertha Streets Corridor project, the final asphalt hasn’t been poured. The paint and markings haven’t been laid. Will any of our City leaders have the guts to demand better for this project now before its too late?