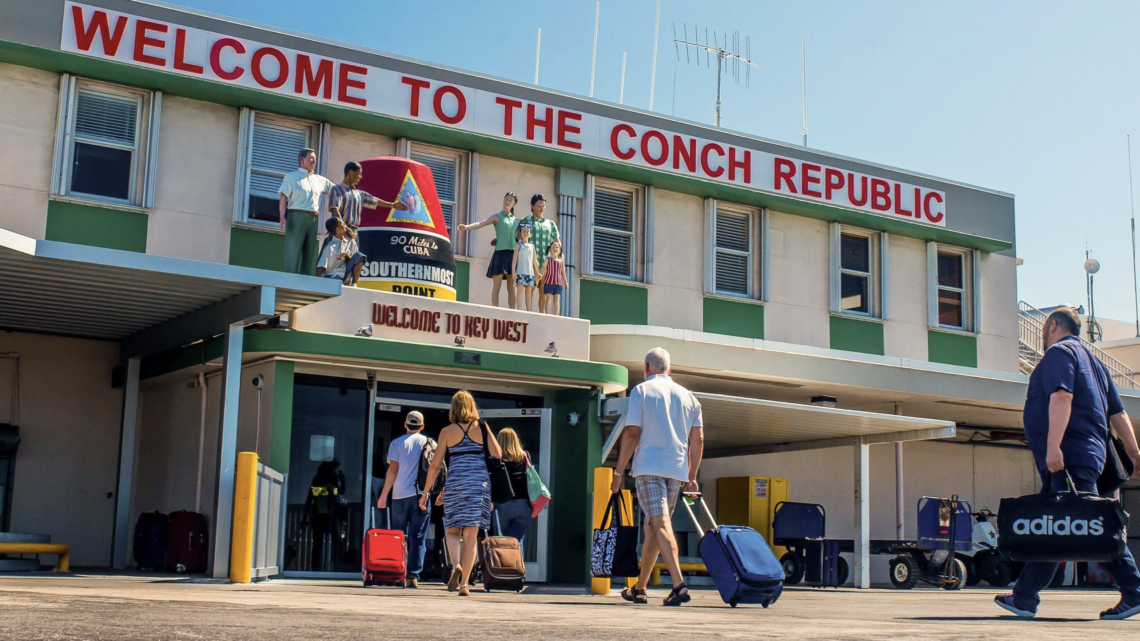 As we near the end of 2021, we wanted to look back at the 43 stories we’ve written since the column began January 29 under the weekly Streets for People moniker here at KONK Life newspaper. Which of the stories about bike, walk, transit, streets for people and the persons that work on these issues do you think resonated the most with our readers? Stand-up e-scooters? Bike lanes? Duval Street? Parking? Uber-Transit? Cruise Ships? The Bike Guy? The airport? Based strictly on the number of views, here’s our countdown from #10 to our #1 most popular story, a quick summary of each and any updates we’ve been made aware of since the article was published. Let’s get to it.

#10. We Need to Encourage Efforts Like the Proposed Lama Electric Scooter; August 6, 2021

Back in August, entrepreneur and local hotel owner Marc Meisel went before the City Commission asking for an exemption to put 48 Lama e-scooters (the stand-up kind) at his three properties. Key West is currently in the middle of a two-year moratorium on new rental vehicles. Thus, the need for an exemption. Key West also does not allow one-way dockless bikes or scooter rentals that operate (usually by phone app) on the City’s right-of-way. The Lama e-scooter gets around these issues by putting docking stations, which charge the bikes, at the hotels and by requiring a round trip – although the user can lock the scooter at multiple destinations before returning it. Mr. Meisel tells us that his application was just approved by an enthusiastic Planning Commission that cited it’s eco-friendly, alternative transportation as important to fighting traffic congestion. He said Commissioner Hoover was a big help too. Good for the Planning Commission and the Commissioner! He expects the program to kick off in January.

Surveys for the City’s recently adopted Strategic Plan show Key West Residents believe revitalizing our Main Street should be one of the City’s top investment priorities. An RFQ was released in November 2019 to hire a consultant to do this work. A vendor was selected in August 2020 and a contract signed in November of the same year. Work was to begin with community meetings shortly thereafter. And then the wheels came off and City staff changed course wanting a whole new process. At the time of this article a new RFQ was still being written, so we suggested three quick wins to do something on Duval now. Those included: #1. Widen the Sidewalks by Installing Parklets; #2. Install Bike Corral Parking on Duval’s Cross Streets and 3. Get Rid of Parking and Let the People Take the Street. As of this writing a new RFQ hasn’t been released (see update in #2 below) and none of these proposals have been implemented, although we hear the new “Bike Guy” (see #6) likes this idea.

This article acknowledged that limiting large cruise ships, as the voter passed referenda did and the City Commission was attempting to do in July because of the referenda’s overturning by the Governor, was better for our island’s health, water quality and overall economy too. The crux of the article is that the loss of mass tourism day trippers provided an opportunity for our downtown to remake itself. Rather than catering to hordes of people in town for a few hours, we could be a more real, authentic, and local focused place that caters to residents, snowbirds, and long-term visitors. Think, less t-shirt and trinket shops and more art spaces, galleries, live theaters whimsical shops, bars, restaurants, cabarets, clothing, shoes, furniture, housewares, hardware, bakeries, butchers, grocery, and the like. Note the Commission, sadly, seems no closer to getting anything done on limiting large cruise ships today than six months ago.

With 77 percent of Key West’s record number of visitors arriving by car, this article discussed the 1,000 free, on-street parking spots downtown visitors are allowed to store their vehicles in for up to three days (72 hours) at a time. With Old Town residents finding it hard to find parking near their home and other locals who now pay for $35 for a Resident Parking Permit finding it difficult to find parking when they go downtown, we wondered, why in the word is the City letting visitors park their cars for three days at a time for free, when they should be in long-term lots so as to free up spots for locals. The solution? Putting hourly limits on these 1,000 spaces. For the most part people agreed with this. There’s no indication the City Commission has any stomach to tackle issues as contentious as parking though.

This was the feel-good story of the year and generated nothing but love on social media as we introduced local and bicycle advocate Ryan Stachurski as the City’s new Multi-Modal Transportation Coordinator or “Bike Guy.” Coming after the disappointing departure of the wonky, hard-working Tim Staub, who left the position for graduate school, Ryan’s selection was widely hailed as an awesome pick that soothed the loss of Tim. We interviewed City officials and local advocates and they all had nothing but glowing things to say about Ryan. He provided us some nice background info too. It is a story that helps residents get to know Ryan better while offering hope for the future.

This story asked the question if it was too late to revisit the City’s 2017 decision to reject FDOT, the City Engineer and participating citizens preference for a turn lane and protected bike lanes on South Roosevelt Boulevard along Smathers Beach when the road was rebuilt, since planning wasn’t complete, and construction wasn’t slated to start for a couple more years. This story generated a ton of discussion on social media. The ensuing conversation seemed to influence Commissioner Mary Lou Hoover, who two months later introduced a resolution to rescind that 2017 decision. Although her May 4 resolution was successful, we’ve recently learned that the resolution was too timid and too late to change the course already set and we’ll get a less safe 4-through-lane Boulevard as a result when construction is supposed to be complete in 2023. This is a major FAIL.

After a couple years of various planning processes (10-Year Transit Plan, City Strategic Plan, Sustainability Board) all identifying hiring more drivers so that frequency could be increased from the current 80-95 minutes on the North and South “City” Lines to 30 minutes this fiscal year and eventually 15 minutes, officials declared that finances precluded an investment in transit. As a result, with no more money coming, the Transit Director came up with an innovative idea that he said would maximize use of available drivers, expand coverage, and restore full day service on weekends without an increase in the budget. The idea? Eliminate the fixed North and South lines and evening Duval Loop service and replace it with an Uber-like, On-Demand service where customers order the bus on their phone and take trips between bus stops. It is slated to begin December 20. Stay tuned…

This was one of the more fun stories of the year and it generated plenty of nostalgia from long-time residents. Behind the airport there are vestiges of two bike/walking trails that locals used to use. The “Salt Ponds” or Airport Connector Trail that would connect the communities of Ocean Walk, Las Salinas and Seaside along a trail on the backside of the airport and connect with Government Road. The other is the Smathers Beach Trail that would allow the High School access to a path from Flagler/Government Road across the Salt Ponds, behind the Key West by the Sea condos to Smathers Beach. Both of these paths had been blocked or filled in over the last couple of decades, but the Bike/Ped Plan calls for their resurrection and Multi-Modal Coordinator Tim Staub suggested planning be started on rebuilding these paths this fiscal year in his annual report. The community gave a hearty yes to this idea. Although planning for these two new “old” trails has not been formalized, we’re told the “Bike Guy” (see #6) likes them.

This is the story that keeps on giving. It builds off #9 in our countdown, so it shows that Duval Street Revitalization is an ongoing hot topic with us locals. Mayor Johnston has promoted this since her first campaign in 2018. Her Mall on Duval pilot project prompted a discussion that begat an RFQ in November 2019 to hire a consultant to do this work. A vendor was selected in August, 2020 and a contract signed that November. Work was to begin with community meetings shortly thereafter but then the City suddenly dropped the contactor and started all over. This article, with plenty of input from the City’s Planning Director, Katie Halloran set the record straight on what happened, including letting us know that by starting over the City was able to secure a $500,000 State grant to pay for the planning effort, ensuring that subsequent asks for State construction money would be more forthcoming. Ms. Halloran had also expected that the RFQ would have been released in a couple weeks, a ranking selection by the end of December and an official selection in January. Therefore, in the October 1 article we surmised that given the Planning Directors’ explanation, that perhaps the loss of a couple years would be worth the wait. Alas, the RFQ has yet to hit the streets. It is really sad that this signature issue of the Mayor’s has been so snakebit by delays because it is a project we all look forward to – revitalizing our Main Street.

We were initially surprised that this story was our most read column of the year. It seems a huge discussion on various social media group pages propelled people to read the article. Perhaps we shouldn’t have been so surprised, as nothing gets us locals so fired up as change and car traffic. Lots of people took issue with us saying that expanding the airport to accommodate more passengers was a good thing because well, who wants change? People didn’t like the architecture, the cost, nor the ability for the airport to bring more visitors to the island. But with overnight stay visitors reaching an all-time high, and most of them getting here by private or rental car, we made the case that more people arriving by airplane gives us the opportunity to reduce the volume on U.S. Route 1 and the traffic downtown, if we can get them to bike, walk and transit once they get here. Backing us up was a 2019 study from the University of South Florida and plenty of data from the TDC from which we provided lots of stats. If anything, the outpouring for this story reminds us that we’ll do a follow-up this winter on how the City and County need to do a better job of getting visitors not to bring cars to our island at all.

Next week we’ll look back at the Countdown of the Top 10 Most Important Bike, Walk, Transit and Streets for People stories of 2019 and 2020. Then on December 10 and 17 we’ll present a two-part series counting down the most important stories of 2021. We hope you’ll join us.