Streets for People / City Commission Tries to Have Its Cake and Eat It Too on S. Roosevelt Blvd. – Perhaps Dooming a Safer Project 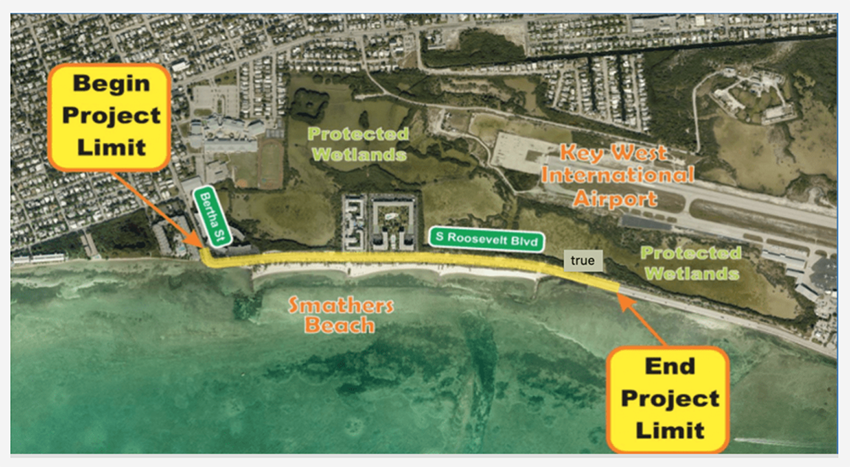 Streets for People / City Commission Tries to Have Its Cake and Eat It Too on S. Roosevelt Blvd. – Perhaps Dooming a Safer Project

The City Commission seemingly took a step in the right direction Tuesday night, when by a 6-1 vote (Commissioner Wardlow dissenting), they rescinded a bad 4-year-old decision and gave the City Engineering staff direction to make the S. Roosevelt Boulevard corridor safer for cars, bikes and pedestrians with a new design. The catch is their resolution says to do this as long as it doesn’t interfere with the timeline or budget for the project. It was clear staff didn’t believe they could meet the spirit of the resolution. So, without some modest sacrifices in time, funding and maybe parking, the Commission’s gesture is likely too late in the process to make a difference. The Commission can’t have its cake (getting to say they did the right thing by voting for a safer design) and eat it too (make no concessions on timeline and budget). They need to summon the courage to do better.

In February 2017 the then City Commission voted 5-2 (Wardlow, Lopez, Payne, Romero and Cates vs. Weekley and Kaufman) against the recommendation of FDOT, their own City Engineer and most of the participants of a public process to keep the current configuration of S. Roosevelt Boulevard at four through travel lanes when FDOT rebuilds the section of the road from the end of Smathers Beach to Bertha Street to mitigate flooding issues, as they did with the rest of the road some years back. FDOT and City staff recommended a safer two through travel lanes (one in each direction instead of two), a middle turn lane for the condos and hotel and bicycle lanes to attract some of the bike riders from the Promenade and lessen conflicts with beach goers, runners and walkers. The Commission couldn’t fathom making a change and didn’t want to inconvenience car travelers, even though an FDOT analysis said the change wouldn’t affect traffic flow or volume. But that was then. 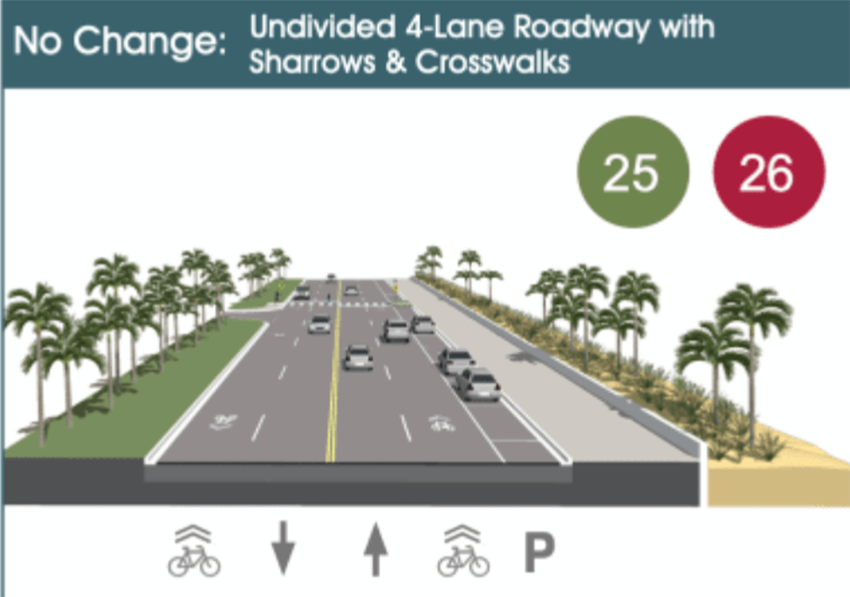 We have a more forward-thinking Commission now. After doing a lot of research, Commissioner Mary Lou Hoover sponsored a resolution on Tuesday night that rescinded that 2017 decision and instead directed staff to design the road to “Complete Street” standards as proposed four years ago. As the first speaker on the issue, WeCycle Bike Shop owner Evan Haskell said, “FDOT recommended this four years ago. It was the right thing to do then and it’s the right thing to do now.”

Mr. Haskell also answered critics who are afraid this will slow traffic down when he noted that the current four through lanes design includes installing signalized HAWK crossings, like on N. Roosevelt Boulevard, at each of the two condos (La Brisa and Key West by the Sea) and The Barbary Hotel. These wouldn’t be needed for crosswalks that only have to cross two lanes of car travel. He noted that FDOT said the HAWK signal will slow traffic more than the alternative (two through lanes). Speaker Roger McVeigh agreed and noted how much nicer a reconfigured boulevard could look in comparison and how important first impressions are to the visitors coming in at the airport.

The Mayor and Commissioners agreed. As Mayor Johnston put it “Why would we spend the time and money to put in an antiquated road. We keep talking about bike lanes and then we repave roads and don’t put them in. We have to build for the future.” Commissioner Hoover added that if we lose a few months on the timeline to get this right we should do so. 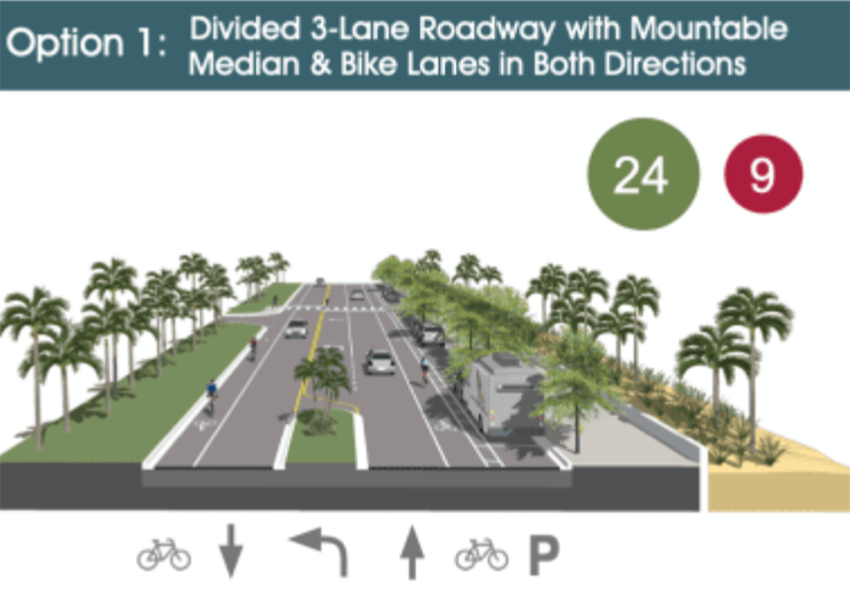 Is This Too Little Too Late?

The Mayor and Commissioner Hoover’s admonition to doing the right thing, even if it takes slightly longer, seemed to run headlong into the resolution’s wording about not compromising the current schedule. Engineering Department Director Steven McAlearney and City Engineer Kelly Crowe went into contortions in trying to explain why despite the vote, it may be too late to change direction. Said Mr. McAlearney, “It is more than just changing the paint on the road.” Which is exactly the opposite of what the Commission and public has been told all along.

Apparently, some items fell through the cracks, like getting all the rights-of-way deeded to the project. And this makes it harder to design something new that needs a few extra feet in width. In particular the City Engineer pointed out “We got the other required property’s (rights of way), but I don’t know why we didn’t get Key West by the Sea’s.” Engineering explains there’s a choke point in front of Key West by the Sea and they either need a few feet of space on that side of the road or you’ll have to lose some parking spaces, perhaps as many as 30, on the other side.

Key West by the Sea Management has indicated that they may give the land to the project, as they see virtue in having a middle turn lane, a shorter crosswalk to the beach for their residents and a sidewalk, but it may take a few months to go through the formal process of the resident’s voting first. And the rub seems to be that everyone now seems in a hurry and very mindful that FDOT has a deadline of September 7 for the City, which is conducting and paying for the design, to turn in 100% completed drawings by then. 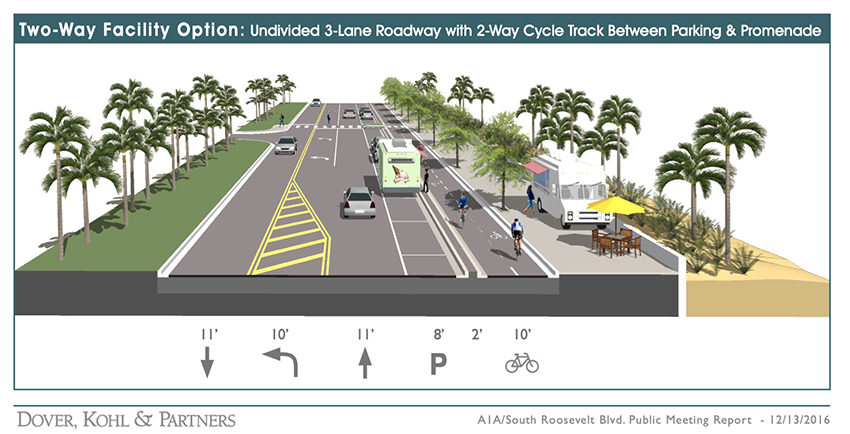 Project Delays Are Typical on Road Projects. So Why is Everyone NOW So Adamant About Meeting a Deadline?

When was the last time an FDOT project was completed on time? We should note this project has been delayed a number of times already and isn’t scheduled to be constructed for two more years. But NOW no one seems to have any wiggle room in giving the City a bit more time with its design to make this a better project. I guess FDOT doesn’t like that the City changed its mind about the project and some at the City don’t seem willing to press the issue with FDOT.

City Engineering staff presented so many caveats to the process that it was pretty clear in watching the proceedings they believed they couldn’t get a new design done by September 7. But the way the resolution was written, saying the Commission wanted the change as long as it didn’t interfere with the timeline and budget, hamstrings staff’s ability to do the right thing. 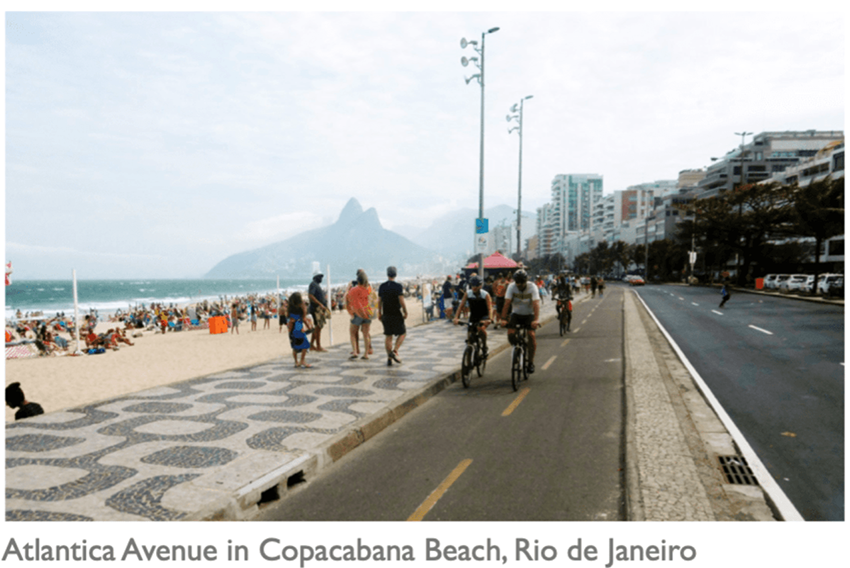 Commissioner Hoover seemed to say a small delay should be acceptable. She’s right. And the Mayor agreed saying: “We need to get to yes, by getting to a street for the future for Key West.” We agree.

This is a 25-year decision. What’s a few months or even a year and a couple hundred thousand dollars, if it means we all get a safer road that works for our future? It’s a small price to pay.

The Commission can’t have its cake (getting to say they did the right thing by voting for a safer design) and eat it too (make no concessions on timeline and budget). They need to summon the courage to do better and take the constraints off of staff about timeline and budget at its very next meeting. Otherwise, their vote will have been nothing more than an empty gesture.

It’s Time to Reconsider a Road Diet on S. Roosevelt and Make the Promenade and Road Safer; March 26, 2021