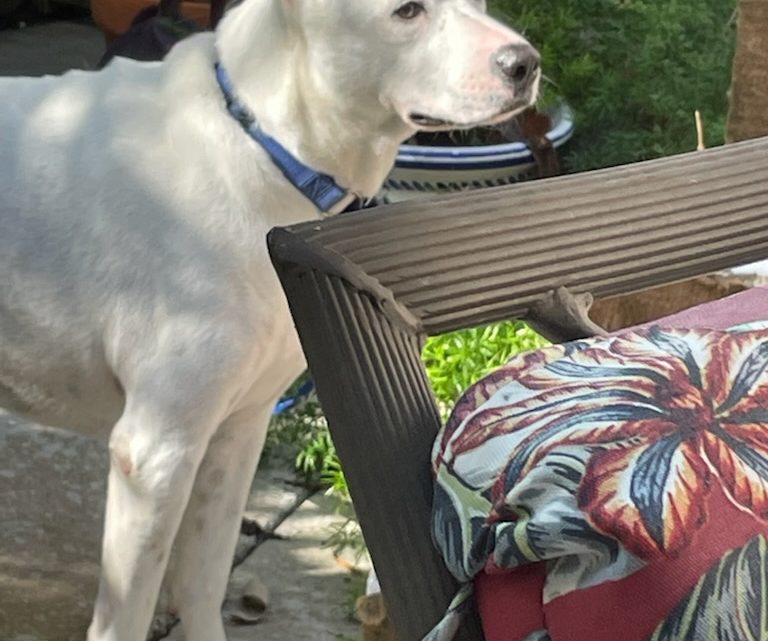 Bittersweet can sometimes describe the feelings experienced when a long-term shelter dog finally leaves the shelter to go to a new home. Of course, we are always thrilled but also know we will miss the friendship that formed during the time he was in our care. Andy was such a dog!

Andy came to us in the fall of 2020 during the pandemic. He was two-years-old and heartworm positive. He had been adopted from a shelter on the mainland 3.5 months earlier. He was surrendered to us because he kept escaping by jumping the fence. His records from the other shelter noted that was the same reason he was given up the first time. We had a Houdini on our hands!  Fortunately our fences were tall enough to contain him.

When we first met Andy, his behavior was that of a dog who didn’t trust right off the bat. His trust had to be earned and until it was, he could be a challenge. His defensive behavior in the kennel was concerning but as he got to know those who cared for him, he softened and we began to see just how sweet and sensitive he could be. Over time, he became a staff favorite and could be found hanging out with the crew while laundry was being washed, meals were being prepared, or office work was being done.

We knew Andy had the potential to be a great companion for someone but as much as we all loved him, he wasn’t an easy go-home-with-anybody sort of dog. The challenge of adopting animals is that it can be hard to know how that animal will behave outside the shelter. Shelter behavior can be very different from the behavior an adopter sees once that animal goes home.  The environment an animal lives in has a huge influence on behavior. So based on what we have witnessed or been told by previous owners, we do our best to place animals in situations to maximize safety for everyone while setting the animal up for success. There were certain things Andy let us know he didn’t like. He wasn’t a fan of strangers in his personal space, he wasn’t a fan of every dog, he wasn’t a fan of sharing his “stuff”, and he wasn’t a fan of people getting in his face wanting to give him a “hug” (BTW, most dogs aren’t!) So this limited the pool of adopters. As a result, Andy stayed with us a long time.

His time with us, while too long, was filled with adventures. His favorite things were swimming, long walks on a long leash, reward-based training games, and ice cream! His Houdini ways remained intact and he was always on the lookout for opportunities for an unsupervised outing. He was clever and on occasion, did manage an escape. But when he was done with his fun, he came running back “home”, tired but happy and ready to return to his kennel.

When Susan and Mike saw Andy in late April of this year, they were drawn to him. We were honest about the issues they might encounter and tried to prepare them with resources and support to increase the chances of success. Andy’s powerful and determined ways were not the easiest to contend with initially but they both rose to the occasion and as the weeks passed, they got to know him better and better. He now gets long daily walks, and has two people who love him, and sleeps next to them in a huge comfy bed every night. Although he will always be Andy to us, his new name is “Spirit”. We think it’s a perfect name for a beautiful white dog with plenty of it! Congratulations, Andy; we miss you but couldn’t be happier for you!