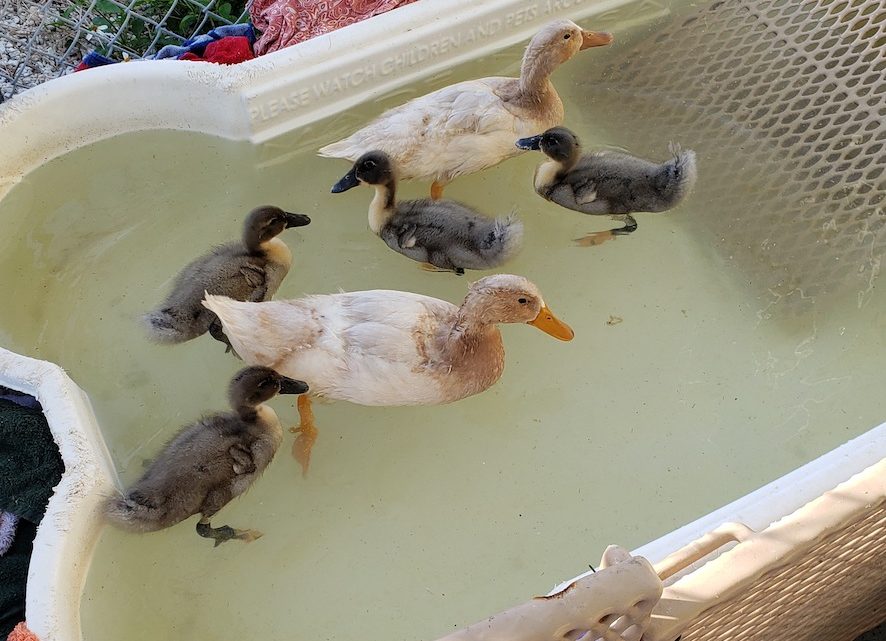 An outlier is defined as “something that lies outside the main body or group.” A pig, a goose, and six ducks were definitely outliers at the Florida Keys SPCA, not typical examples of the animals we care for. Penelope the Potbellied Pig and Lucy the Goose came through our doors twice,  brought to us by their original owners, then again after their adopters moved. Penny was 5 yrs.; Lucy was a gosling when we first met her but was now an adult. The six ducks were left at the Wildlife Center but being domestic,  came to us.

Housing farm animals at a shelter requires ingenuity. Lucy and Penny were like bonded siblings, equally compatible and scrappy, and needed separate areas which allowed companionship with boundaries. Sharing meals was not an option since Penny would bulldoze her way through anything she could to eat Lucy’s food. They would eat breakfast separately then enjoy time together wandering around the yard.   We built a habitat for the ducks that included a pool. Our biggest challenge was maintaining it since they loved clean water but had no inclination to keep it that way!

THE SEARCH FOR HOMES

We immediately started looking for appropriate homes with no idea just how difficult it would be for each of them.  Every responsible pig rescue we contacted was already full. SO many potbellied pigs  obtained as pets become unwanted  as they grow and  mature.  Finding a home for Lucy wasn’t any easier since she was territorial at times and would bite, proving that, indeed, some geese can be as effective as dogs as protectors. Given that ducks are naturally quite messy,  we needed an environment with both space and access to fresh water, again not as easy to find as one would think.

Our search was coming up with nothing good and we were feeling really discouraged until one phone call changed everything! In an attempt to find homes for our rabbits, a staff person contacted  a rabbit rescue. During the conversation, she offhandedly asked, “You wouldn’t happen to know any good pig rescues, would you?” And that’s when we were given Mindy’s name. Mindy, John, and their son Orion are amazing! They already have their own mini-herd of potbellied pigs. One conversation with Mindy convinced us they were the right people for Penny. But the good news didn’t end there. Mindy agreed to accept Lucy too! Now all we needed was a good place for the ducks. Mindy provided the name of beautiful place near her with a lake. We contacted the owners, who said they would be happy to take them. We were elated that all of our “outliers” would soon be living better lives. Our next step was to get them to their new homes on the mainland.

The plan was to transport everyone at the same time.  It took some coordination, our shelter van, and a brave and wonderful staff member named Dean who willingly accepted the challenge. Early on the day of travel, we loaded everyone in the van, and Dean headed up US#1. His first stop was Mindy’s where several neighbors helped him lift Penny’s heavy crate. Lucy followed. Soon the two were exploring their new world and enjoying a strawberry smoothie as a welcoming gift! Next stop was the ducks. We envisioned their transition into a happy and natural life as Dean drove away after dropping them off.  A week later we learned one duck had  disappeared.  Iesha, their assigned caretaker, was so concerned for the safety of the remaining ducks, she rounded them up and decided to take them home! We learned this as she was leaving with them in her truck. We called the amazing Mindy, who immediately offered to meet Iesha at her house and help build a temporary pen that night.  We later learned  that this was how Iesha chose to celebrate her birthday this year: saving ducks!   We’re happy to report the ducks now have a safe home with a neighbor of Mindy’s, who along with Iesha, will help care for them.

One of the best things about our work is the incredible people we meet and the connections we make along the way. Mindy and her family, along with Iesha, are role models of kindness and compassion. We now consider them our friends.  We are grateful to them and to our transporter Dean and all other staff involved who worked together to ensure these animals a better life.

Next post Winners of the Tennessee Williams Writing Competitions Announced 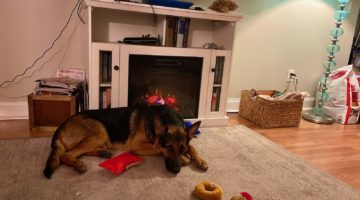