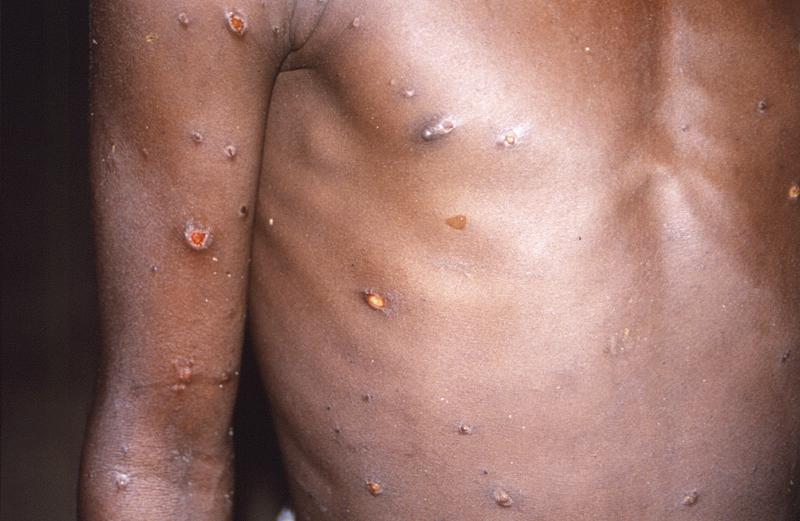 This 1997 image provided by CDC, shows the right arm and torso of a patient, whose skin displayed a number of lesions due to what had been an active case of monkeypox. As more cases of monkeypox are detected in Europe and North America in 2022, some scientists who have monitored numerous outbreaks in Africa say they are baffled by the unusual disease’s spread in developed countries. (CDC via AP)

Health officials in Broward County and the Centers for Disease Control and Prevention are investigating the case which appears to be related to international travel, the Florida Department of Health in Broward County said in a news release.

The person is in isolation, and local Department of Health officials were notifying people who may have been exposed to the patient, the news release said.

The health agency provided no further details about the case.

Monkeypox is a virus that originates in wild animals like rodents and primates, and occasionally jumps to people. Most human cases have been in central and west Africa, where the disease is endemic. Monkeypox is rarely identified outside of Africa, but as of Friday, there were 80 confirmed cases worldwide, including at least two in the United States, and another 50 suspected ones.

Most patients only experience fever, body aches, chills and fatigue. People with more serious illness may develop a rash and lesions on the face and hands that can spread to other parts of the body.

The Florida Department of Health said in its news release that risk of exposure is low since its requires contact with lesions or items that have been contaminated by lesions.

On Sunday during his first public comments on the disease, President Joe Biden said, “It is a concern in that if it were to spread it would be consequential.”