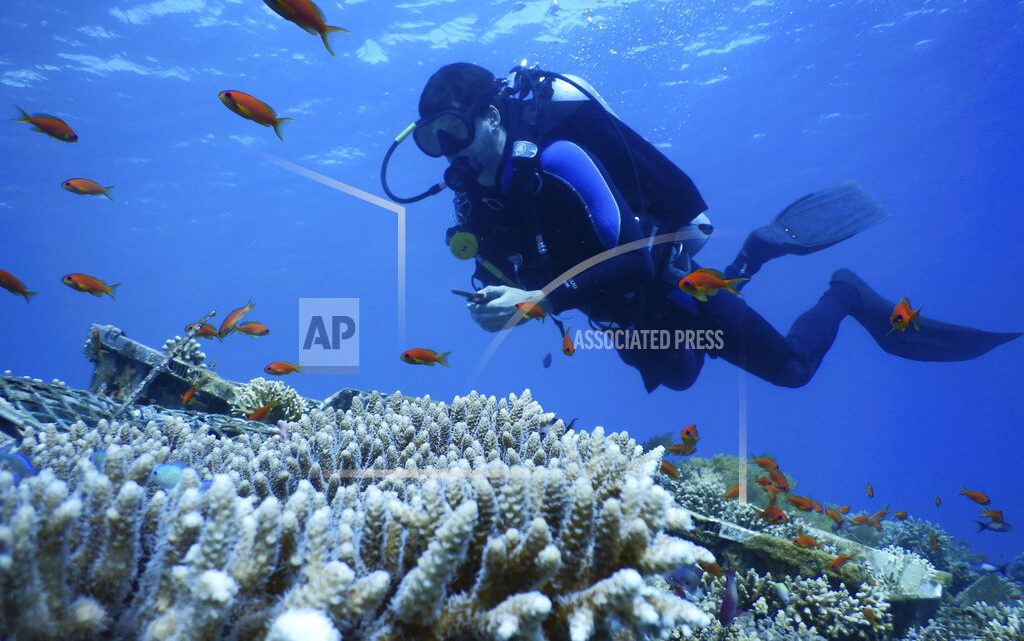 EILAT, Israel (AP) — As the outlook for coral reefs across a warming planet grows grimmer, scientists in Israel have discovered a rare glimmer of hope: The corals of the northern Red Sea may survive, and even thrive, into the next century.

There is broad scientific consensus that the effects of climate change have devastated the world’s reefs, recently ravaging large swaths of the Great Barrier Reef in Australia, one of the natural wonders of the world. 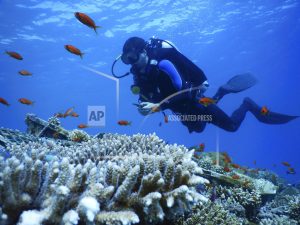 This Thursday, Jan. 17, 2019 photo, provided by the Interuniversity Institute for Marine Sciences, IUI, shows corals at the institute’s coral farm in the Red Sea city of Eilat, southern Israel. As the outlook for coral reefs across our warming planet grows grimmer than ever, scientists have discovered a rare glimmer of hope: the corals of the northern Red Sea may survive, and even thrive, into the next century. The coral reefs at the northernmost tip of the Red Sea are exhibiting remarkable resistance to the rising water temperatures and acidification facing the region, according recent research conducted by IUI. (Interuniversity Institute for Marine Sciences/Dror Komet via AP)

The carbon dioxide that humans pump into the atmosphere spikes the temperature and acidity of seawater, which both poisons the marine invertebrates and hampers their growth at alarming rates, according to studies published last year in the journal Science. Experts estimate that half of the corals that existed in the early 20th century have died.

But the corals at the northernmost tip of the Red Sea are exhibiting remarkable resistance to the rising water temperatures and acidification, according to recent research conducted by the Interuniversity Institute for Marine Sciences based in Eilat. Experts hope the lessons learned in the Red Sea can help coral reefs elsewhere in the world.

“Corals worldwide are dying and suffering at a rapid pace, but we have not witnessed a single bleaching event in the Gulf of Aqaba,” said Maoz Fine, an expert on coral reefs at Bar-Ilan University and director of the research.

Warmer water causes corals to eject the brightly colored plants that serve as their primary food and oxygen source. This causes reefs to “bleach,” or take on a bone-white pallor that often portends mass mortality.
While other hardy coral species can be found in the Indian and Pacific Oceans, “there’s nowhere else in the world that reefs are this far away from their bleaching thresholds,” said Fine. Plenty of other refuges remain unknown, but “this is the only spot we know of with a warranty ensuring these reefs stay safe for the next several decades,” he said.

On a recent day at the lab, Fine examined coral fragments in water treated to simulate future global warming scenarios, pointing to their ruddy color as a sign of good health.

The Gulf of Aqaba has become a refuge for tough corals that are projected to outlast far worse future conditions. Fine’s latest study, published this month in the Journal of Experimental Biology, found further cause for optimism: The coral species’ thermal resistance carries over to their offspring, indicating that future generations will also remain immune to bleaching, with implications that could extend beyond this spot of the Red Sea.

Fine’s research credits northern Red Sea coral resilience to a giant natural selection event that occurred some 18,000 years ago. As glaciers retreated at the end of the ice age, reefs moved in to recolonize the southern part of the sea, where temperatures ran exceedingly high.

Only corals that could bear the heat managed to reach maturity and migrate north, where they resettled in conditions several degrees cooler than their thermal threshold. Further research is underway to determine how existing in temperatures below their tolerance levels may lend corals physiological benefits.

“All corals were obliterated except for the best genotypes, the winners of the climate change lottery,” said Fine. Today, these hardy corals continue to survive as Red Sea waters warm, only showing signs of heat stress at six degrees above the summer maximum sea temperature.

“Not only does this give us an incentive to protect this special refuge as much as possible, but also allows us to find hints as to the most important genes for thermal resistance,” he added.
Picking out winning genes can contribute to an urgent worldwide push to restore and repopulate dead reefs. Some cutting-edge labs in Hawaii and Australia have even started crossbreeding the corals that survived or recovered from the mass bleaching of their reefs to create gene banks of “super-corals” that they hope can survive future elevated temperatures.

“If corals are surviving and reproducing in the Gulf of Aqaba under stressful conditions, and in the central and southern Red Sea they’re not, we can reseed the hardy corals in nearby bleached areas,” said Jacqueline De La Cour, operations manager for the U.S. National Oceanic and Atmospheric Administration’s Coral Reef Watch, who was not a part of the study. “Entirely new ecosystems that can withstand climate change would be established.”

The U.S. agency has honed such restoration techniques in Florida, where reefs play a critical role in softening the blow of hurricanes.

Jessica Bellworthy, a doctoral student in Fine’s lab, said that while it’s too soon to tell whether Gulf of Aqaba corals would retain their resilience if multiplied and transplanted to other environments, it’s a “direction we could eventually take our data.”

Fine likened transplanting corals to “playing God,” saying that although such human intervention has become well-established, it carries ecological risks and raises ethical questions. For instance, should humans be introducing new species where there are natives?

But some scientists contend that only a hands-on response can address accelerating reef mortality rates. From 2014-2017, corals experienced the most widespread and damaging “bleaching event” in global history, said De La Cour.

Experts often compare reefs to rainforests when trying to convey their stunning diversity of life. “If you lose reefs, you lose everything that depends on them,” said Michael Webster, executive director of Coral Reef Alliance, a San Francisco conservation group.

Reef death not only carries dire consequences for wildlife, but also for the homes, health and livelihoods of hundreds of millions of people: those who fish, work in tourism, dwell on islands made of coral or rely on reef protection from coastal erosion.

“The survivors in the Gulf of Aqaba are only going to become even more essential to us over the next 100 years,” said De La Cour. “Coral refuges show us that species can adapt. It gives us hope.”

Next post LETTER TO THE EDITOR / CAPITALISM, SOCIALISM and DEMOCRACY