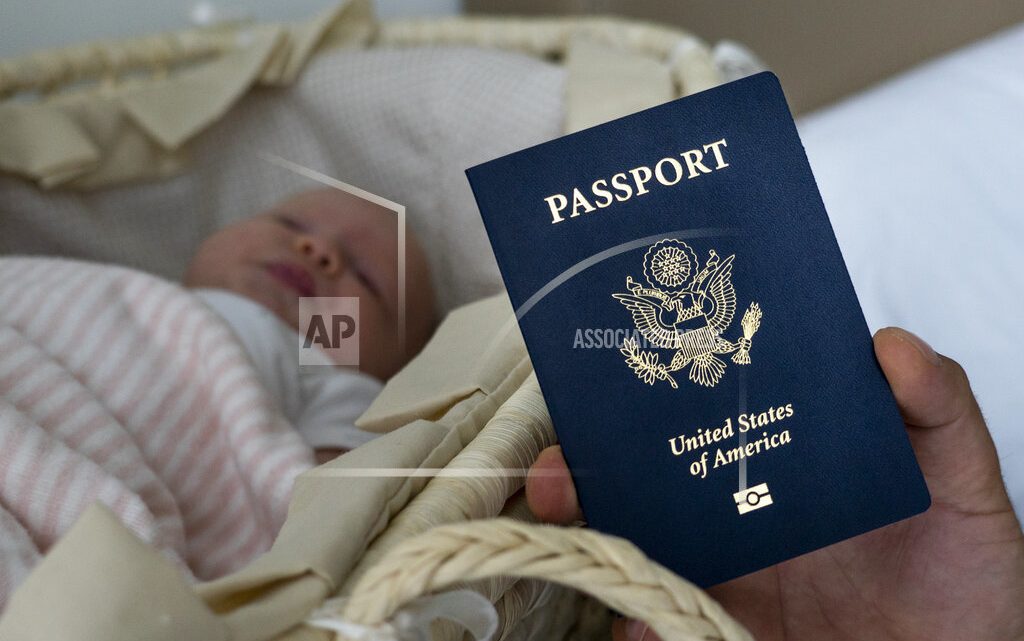 MIAMI (AP) — Every year, hundreds of pregnant Russian women travel to the United States to give birth so that their child can acquire all the privileges of American citizenship.

They pay anywhere from $20,000 to sometimes more than $50,000 to brokers who arrange their travel documents, accommodations and hospital stays, often in Florida.

While the cost is high, their children will be rewarded with opportunities and travel advantages not available to their Russian countrymen. The parents themselves may benefit someday as well.
And the decidedly un-Russian climate in South Florida and the posh treatment they receive in the maternity wards — unlike dismal clinics back home — can ease the financial sting and make the practice seem more like an extended vacation. 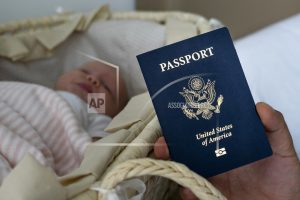 Denis Wolok, the father of 1-month-old Eva’s father, shows the child’s U.S. passport during an interview with The Associated Press in Hollywood, Fla. Every year, hundreds of pregnant Russian women, like Wolok’s wife, Olga Zemlyanaya, travel to the United States to give birth so that their child can acquire all the privileges of American citizenship. (AP Photo/Iuliia Stashevska)

The Russians are part of a wave of “birth tourists” that includes sizable numbers of women from China and Nigeria.

President Donald Trump has spoken out against the provision in the U.S. Constitution that allows “birthright citizenship” and has vowed to end it, although legal experts are divided on whether he can actually do that.

Although there have been scattered cases of authorities arresting operators of birth tourism agencies for visa fraud or tax evasion, coming to the U.S. to give birth is fundamentally legal. Russians interviewed by The Associated Press said they were honest about their intentions when applying for visas and even showed signed contracts with doctors and hospitals.

There are no figures on how many foreign women travel to the U.S. specifically to give birth. The Center for Immigration Studies, a group that advocates for stricter immigration laws, estimated that in 2012, about 36,000 foreign-born women gave birth in the U.S., then left the country.
The Russian contingent is clearly large. Anton Yachmenev of the Miami Care company that arranges such trips, told the AP that about 150 Russian families a year use his service, and that there are about 30 such companies just in the area.

South Florida is popular among Russians not only for its tropical weather but also because of the large Russian-speaking population. Sunny Isles Beach, a city just north of Miami, is even nicknamed “Little Moscow.”

“With $30,000, we would not be able to buy an apartment for our child or do anything, really. But we could give her freedom. That’s actually really cool,” said Olga Zemlyanaya, who gave birth to a daughter in December and was staying in South Florida until her child got a U.S. passport.

An American passport confers many advantages. Once the child turns 21, he or she can apply for “green card” immigration status for the parents.

A U.S. passport also gives the holder more travel opportunities than a Russian one; Americans can make short-term trips to more than 180 countries without a visa, while Russians can go visa-free only to about 80.

Traveling to the U.S. on a Russian passport often requires a laborious interview process for a visa. Just getting an appointment for the interview can take months.

Some Russians fear that travel opportunities could diminish as tensions grow between Moscow and the West, or that Russia might even revert to stricter Soviet-era rules for leaving the country.
“Seeing the conflict growing makes people want to take precautions because the country might well close its borders. And if that happens, one would at least have a passport of a different country and be able to leave,” said Ilya Zhegulev, a journalist for the Latvia-based Russian website Meduza that is sharply critical of the Kremlin.

Last year, Zhegulev sold two cars to finance a trip to California for him and his wife so she could give birth to their son.

Trump denounced birthright citizenship before the U.S. midterm election, amid ramped up rhetoric on his hard-line immigration policies. The president generally focuses his ire on the U.S.-Mexico border. But last fall he mentioned he was considering executive action to revoke citizenship for babies born to non-U.S. citizens on American soil. No executive action has been taken.
The American Civil Liberties Union, other legal groups and even former House Speaker Paul Ryan, typically a supporter of Trump’s proposals, said the practice couldn’t be ended with an order.
But others, like the Center for Immigration Studies, which advocates for less immigration, said the practice is harmful.

“We should definitely do everything we can to end it, because it makes a mockery of citizenship,” said Mark Krikorian, executive director of the Center for Immigration Studies.

Vladimir Zhirinovsky, an outspoken Russian lawmaker, said the country can’t forbid women from giving birth abroad, and many of them also travel to Germany and Israel.

“Trump is doing everything right, because this law is used as a ploy. People who have nothing to do with the U.S. use it to become citizens,” Zhirinovsky said.

Floridians have shown no problem with the influx of expectant mothers from Russia.

Yachmenev, the agency manager, says he believes it’s good for the state because it brings in sizable revenue.

Svetlana Mokerova and her husband went all out, renting an apartment with a sweeping view. She relished the tropical vibe, filling her Instagram account with selfies backed by palm trees and ocean vistas.

“We did not have a very clear understanding about all the benefits” of a U.S. passport, she said.

“We just knew that it was something awesome,” added Mokerova, who gave birth to a daughter after she was interviewed.

Zemlyanaya said that even her two nights in the hospital were a treat, like “a stay in a good hotel.”

In contrast to the few amenities of a Russian clinic, she said she was impressed when an American nurse gave her choices from a menu for her meals.

“And then when she said they had chocolate cake for dessert, I realized I was in paradise,” Zemlyanaya added.

She even enjoyed how nurses referred to patients as “mommies,” as opposed to “rozhenitsa,” or “birth-giver” — the “unpleasant words they use in Russian birth clinics.”
Zemlyanaya said she was able to work remotely during her stay via the internet, as were the husbands of other women, keeping their income flowing. Yachmenev said his agency doesn’t allow any of the costs to be paid by insurance.

Most of the families his agency serves have monthly incomes of about 300,000 rubles ($4,500) — middling by U.S. standards but nearly 10 times the average Russian salary.

Yachmenev said he expects that birth tourism among Russians will only grow.

Business declined in 2015 when the ruble lost about half its value, but “now we are coming back to the good numbers of 2013-14,” he said.
___
Associated Press writers Curt Anderson in Miami and Varya Kudryavtseva in Moscow contributed to this report.