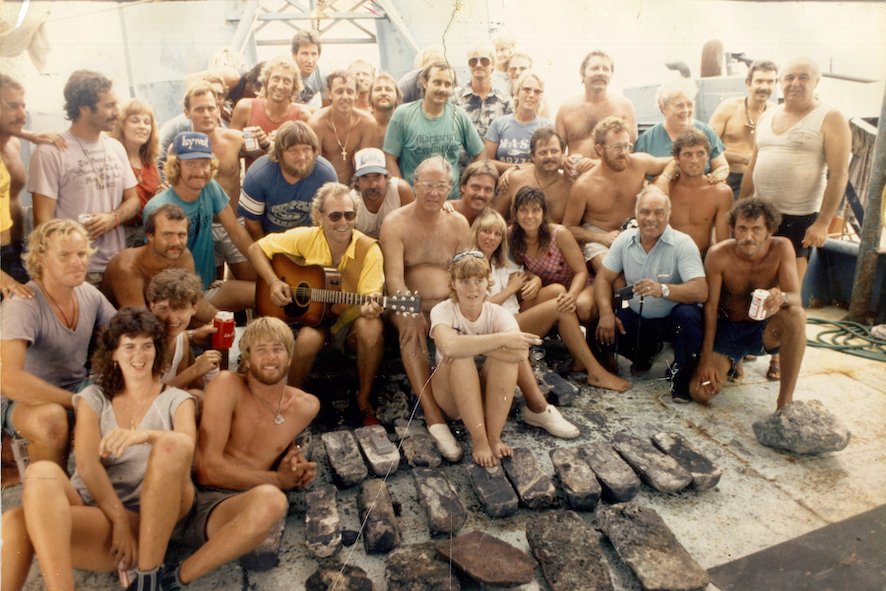 One day after the July 20, 1985 discovery of the Atocha “Mother Lode,” singer-songwriter Jimmy Buffet and the late treasure hunter Mel Fisher sit perched on a throne of silver bars surrounded by family and “Golden Crew” members. This year’s Mel Fisher Days celebrations are set to take place September 2-6 at multiple island locations. (Photo by Pat Clyne)

Four centuries ago this September, the legendary Spanish treasure galleon Nuestra Señora de Atocha, along with several other 1622 Fleet vessels, met their fate in a “storme and fearfull tempest” in the Florida Straits. In 1985, the world watched in wonder as treasure hunter Mel Fisher and his “Golden Crew” capped off a dramatic 16-year search with the discovery of the Atocha’s rich primary cultural deposit – the Mother Lode, 23 miles off of Key West, Florida.

Kick-off takes place Friday, September 2, at 7:00pm with an opening ceremony at the Tropic Cinema, 416 Eaton Street, officiated by Kim Fisher and Taffi Fisher Abt, custodians of the Fisher family legacy and son and daughter, respectively, of Mel and Dolores Fisher. Along with welcome announcements there will be a double feature film screening of “Treasure Salvors of the Florida Keys” and “Adventures of a Lifetime.” Seating is limited for this free event, pre-registration required and charity donations welcomed.

On the evening of September 4, ticket holders can join the Fisher family and symposium speakers for a lavish 400th Commemoration moonlight dinner banquet to be held on the hotel beach from 6:30 to 9:30pm. The symposium and moonlight dinner are each paid events with limited seating; $25 discount available for day/night event package; pre-registration required.

Mel Fisher Days 400th Commemoration events wrap up Tuesday, September 6, beginning at 10:00am with a ceremony and memorial plaque unveiling and installation with City officials and Fisher family members at Mallory Square to celebrate Mel Fisher and his “Golden Crew’s spirit of exploration and adventure and to honor the 500-plus people who lost their lives in the 1622 fleet disaster.

Since its 1998 inception, Mel Fisher Days events have raised more than $155,000 for Wesley House Family Services of Monroe County and over $12,750 for the Michael Abt Jr. Have a Heart Foundation. Wesley House Family Services is a nationally accredited not-for-profit organization dedicated to protecting and nurturing children and strengthening families with programs and services that span all of Monroe County. The Michael Abt Jr. Have a Heart Foundation is a 501-c-3 Florida charity that supports heart screenings on youth, awareness of sudden cardiac arrest in children, CPR training, and placement of automatic defibrillators (AEDs) in schools. Donations to either of these organizations are 100% tax deductible.

The 2022 Mel Fisher Days online auction is now live with bidding for more than $25,000 in treasures and booty continuing through September 6. Links to the auction, tickets and reservations, schedule updates, and information on authors and symposium presenters can be found at www.melfisherdays.com.