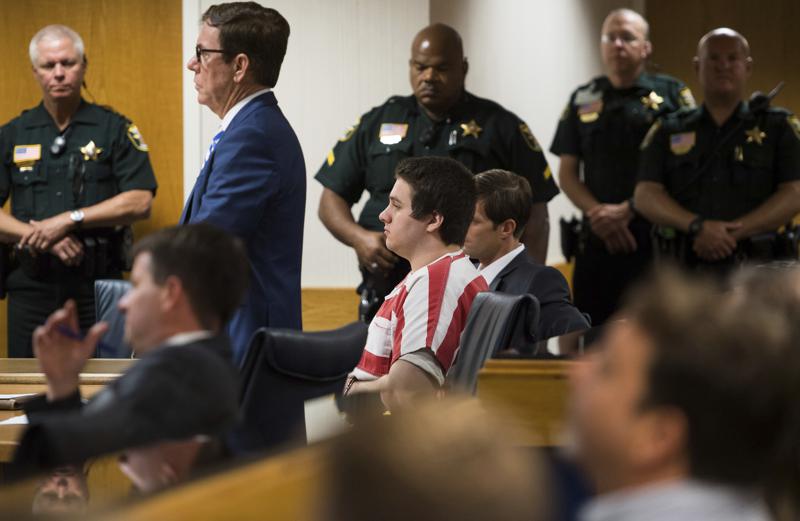 FILE – Austin Harrouff, center, wearing stripes, accused of brutally killing a Tequesta couple in 2016, appears Friday, Aug. 2, 2019, at the Martin County Courthouse in Stuart, Fla., as defense attorney Robert Watson, standing in front of Harrouff, asks Martin County Circuit Judge Sherwood Bauer Jr., to not allow video recording of a mental health evaluation to be conducted by a psychologist hired by the state. Harrouff, a former college student who killed a Florida couple in their garage six years earlier and then chewed on one victim’s face, is finally set to go on trial, Monday, Nov. 21, 2022. (Xavier Mascarenas/TCPalm.com via AP, File)

FORT LAUDERDALE, Fla. (AP) — A judge accepted a plea deal Monday for a man who randomly killed a Florida couple in their garage six years ago and then chewed on one victim’s face that will send him to a mental hospital for treatment.

Austin Harrouff, 25, pleaded not guilty by reason of insanity to two counts of first-degree murder and other charges for the 2016 slayings of John Stevens, 59, and his wife, Michelle Mishcon Stevens, 53. He also seriously injured a neighbor who tried to help them.

Harrouff, who attended Florida State University before the attack, will be committed to a secure mental health facility until doctors and a judge agree that he is no longer dangerous. If the trial had gone forward, Harrouff could have faced life in prison.

“Austin must also contend with the pain he has caused the families,” defense attorney Nellie King said in a statement. “Upon learning of the events of that night, Austin has sought answers for the grief and anguish caused by his actions. Austin is extremely remorseful for all that has occurred; for being at the center of this episode which has caused such unthinkable pain and devastating loss.”

A number of family members of the slain couple expressed anger at the decision and made victim impact statements directed at Harrouff, his family, the defense team and prosecutors.

Cindy Mishcon, the sister of Michelle Mishcon and an attorney, laid out a methodical case of why she does not believe that Harrouff was insane when the killings occurred.

“You can’t even look at me?” she asked Harrouff, who was sitting at the defense table, wearing a red and white striped prison uniform and glasses. She said that she had begun writing her victim impact statement when she was “naive enough” to think there would be justice.

Cindy Mishcon said that reality set in for her as she listened to tapes of Harrouff’s jailhouse phone calls with family members and the reading of pages of text messages in the year prior to the killings, which were part of the court record. The text messages with his friends outlined the life of a student who was smoking marijuana, taking other drugs and abusing alcohol during the year before killing the couple.

She said she realized “you don’t care about anyone but yourself” and that “the only victim you and your family see is you, and the Harrouff name.”

“Is it really so hard for you to understand that you are a cold blooded murderer and not a victim,” she asked.

Other family members echoed her sentiments.

The agreement worked out between the defense and prosecution avoided a trial that had been scheduled to start Monday before Circuit Judge Sherwood Bauer and had been expected to last three weeks.

The judge said Harrouff will remain in the Martin County Jail until he is taken to a secure mental health facility monitored by the Florida Department of Children and Families. Bauer said he will not be allowed to leave the facility without a court order.

Two mental health experts, one hired by the defense and another by prosecutors, examined Harrouff and found he suffered an acute psychotic episode during the attack, and couldn’t distinguish between right and wrong.

The trial had been delayed by the pandemic, legal wrangling and Harrouff’s recovery from critical injuries suffered while drinking a chemical during the attack.

Defendants are presumed sane under Florida law, meaning that Harrouff must show he had a severe mental breakdown that prevented him from understanding actions or that they were even wrong by “clear and convincing” evidence.

He has claimed he was fleeing a demon when the attack happened.

Craig Trocino, a University of Miami law professor, said that finding Harrouff not guilty by reason of insanity would effectively be a life sentence because “it’s highly unlikely” that they would risk releasing a killer as notorious as Harrouff.

Harrouff’s parents and others said he had acted strangely for weeks. His parents had set up an appointment for him to be evaluated, but the attack occurred first.