“Jefferson B. Browne’s Key West” to be next KWAHS Happy Hour with the Historian Event 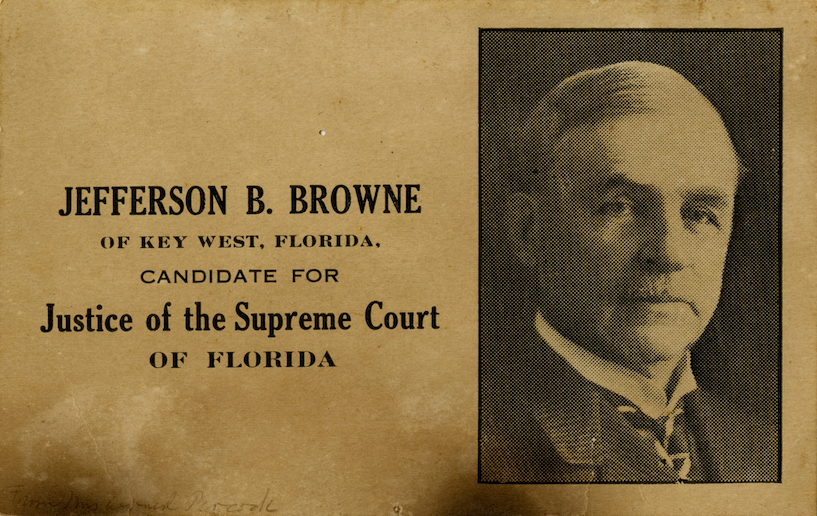 Jefferson B. Browne campaign card created during his bid for Florida Supreme Court Justice.  His Key West connection and historical tome will be highlighted in the upcoming Happy Hour with the Historian “Jefferson B. Browne’s Key West” on November 17 to be held at Comedy Key West.  (Photo Credit: Key West Art & Historical Society)

“Jefferson B. Browne’s Key West” to be next KWAHS Happy Hour with the Historian Event

November 7, 2022 – (KEY WEST, FL).  Raise a toast to Key West history with Key West Art & Historical Society Curator and Historian Cori Convertito, Ph.D., on Thursday, November 17, from 5:00 p.m. to 6:00 p.m. during her popular “Happy Hour with the Historian” program at Comedy Key West, 218 Whitehead Street.  Enjoy a complimentary draft beer, glass of house wine or a soft drink while Convertito presents on the evening’s topic, “Jefferson B. Browne’s Key West” which will explore one of the island’s most influential residents and one of its original historians.

Browne was born in Key West in 1857 and during his lifetime, he held a series of prominent positions on the island, mainly in government employment.  He entered public service in 1880 as the city attorney and eventually ran successfully for Florida senator.  Eventually, Browne was elected a member of the Florida Railroad Commission and served as its chairman.  This talk not only discusses several career highlights, but it will also detail a transitional period in the island’s history which he chronicled and published in 1912 under the title, “Key West: the Old and the New.”

Happy Hour with the Historian is limited to 70 attendees; reserve your spot now at kwahs.org/upcoming-events – $12 for KWAHS members, $15 for non-members.  This project is sponsored in part by the Department of State, Division of Arts and Culture, the Florida Council on Arts and Culture and the State of Florida, with additional support provided by The Helmerich Trust and Comedy Key West.  For more information, contact Cori Convertito, Ph.D. at 305-295-6616 x112 or cconvertito@kwahs.org.  Your Museums.  Your Community.  It takes an Island.

Next post Director of Exhibitions and Education, Customer Relations Manager, and Director of Operations Hired at The Studios of Key West