A Stanley Switlik Elementary School student was charged with possessing a weapon — a steak knife — on school grounds Friday morning.

There were no injuries.

The 10-year-old girl — a fifth-grader ؅— was showing other students the knife in the cafeteria before classes began at approximately 8 a.m.

The girl told other students that should an armed attacker enter the school, she intended on defending herself with the steak knife.

The girl did not threaten anyone with the knife.

Another student reported this to school officials at the front office.

The school principal and Sheriff’s Office School Resource Officer Robert Bulnes stopped the girl as she was leaving the cafeteria and took her to the front office.

The Sheriff’s Office notified the State Attorney’s Office, the Department of Juvenile Justice and the Monroe County School District.

The State Attorney’s Office decided to proceed with criminal charges.

The joint decision was made to give the girl a notice to appear in court and not place her in juvenile custody.

The girl was released to the custody of her parents.

“This was an unfortunate incident, but it was handled quickly and professionally by our School Resource Officer Robert Bulnes and school officials,” said Sheriff Rick Ramsay. “I’m grateful this young girl did not threaten anyone and that did not appear to be her intent. I’m also grateful to report that the incident was handled jointly with our law enforcement and community partners who decided what the appropriate criminal measures should be going forward.” 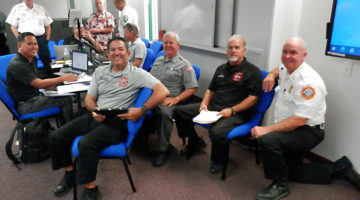