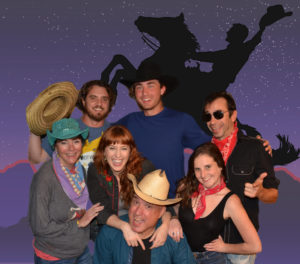 Imagine Hopalong Cassidy trying to date Carrie, or Miss Kitty chasing Chuckie around the corral with a meat cleaver in an Addams Family version of “Gunsmoke,” and you may get close to the outrageous fun and outright craziness awaiting you in the Red Barn’s next production.

“Flaming Guns of the Purple Sage”, written by the always-hilarious and rapier-sharp Jane Martin (“Says She”), opens January 31 and runs Tuesdays through Saturdays through February 25. It’s a preposterous mash-up of B-movie westerns and C-movie horror flicks that will literally have you laughing until you cry, even while you’re sitting in disbelief at what you’re seeing on stage.

“I just love its audacity,” said director Joy Hawkins. “It’s unlike anything I’ve ever directed before. It’s full of macabre people you love and hate at the same time. We can’t get through a rehearsal without laughing ‘til our sides ache.”

Without giving away too much (because the surprises are everything in this tale), “Flaming  Guns” tells the story of Big 8, a retired rodeo star who’s trying to keep her home from being foreclosed on. Living with her is Rob Bob, a rising young rodeo star (think more Gomer Pyle than John Wayne). Into this household comes SheDevil (her choice of name) who is pregnant by Big 8’s ne’er-do-well son, Lucifer Lee. But SheDevil is being hunted down by her very angry Ukrainian biker boyfriend, Black Dog, and when he shows up, things really begin to get interesting.

“Be aware,” Hawkins said, “that there is, indeed, a lot of violence and blood and sex all mixed in, but it’s done in a very farcical and satirical way. Be advised — it’s definitely for adults…I wouldn’t bring the kids. But it’s a very cleverly-written send-up of those old B-movie Westerns and horror flicks. This is all fun and laughs about how crazy – in a very funny way — human beings can be.”

Curtain Up called it “a crowd-pleaser that keeps the audience howling”. The Courier-Journal calls it “hilarious and rip-snortin’”, and Concord Theatricals dubs it a “shoot ‘em up, knock ‘em up, cut ‘em up comic romp.”

Tickets are available now at redbarntheatre.com or by calling 305-296-9911. Sponsored in party by the Smith Law Firm, Culture Builds Florida, and the Monroe County Tourist Development Council.