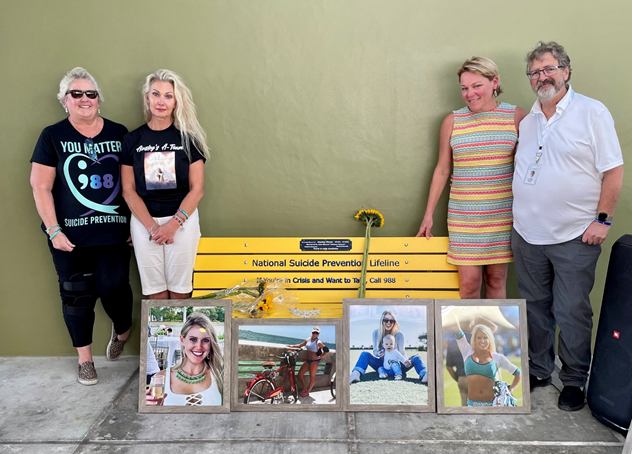 KEY WEST, FL — The College of the Florida Keys held a ceremony on November 7 to dedicate a bench for suicide awareness to the memory of CFK alumna Ainsley Tibbett Steel. The bright yellow bench, which will be called “Ainsley’s Bench,” is prominently located in the Student Center at the Key West Campus and displays the new national suicide crisis hotline number, 988. The bench was donated by Steel’s family through an organization called Josh’s Benches for Awareness, an organization dedicated to suicide prevention.

Steel, who graduated in 2011 with an Associate in Arts, was very active at the College, serving as a Student Ambassador, Student Government Association Parliamentarian, and Sigma Alpha Pi member. She worked in the President’s Office and was the Student Speaker at her graduation ceremony. Steel went on to the University of Miami. She was a mother, adventurer, and world traveler. Her professional experiences include being a Miami Dolphins Cheerleader, working at Lion Country Safari, and teaching English to children as well as caring for elephants in Thailand.

CFK Psychology instructor Dr. Richard Townsend spoke at the dedication event about the importance of intervention in preventing suicides and encouraged everyone to say something if they see someone who is struggling. In an effort to support mental wellness on campus, CFK recently introduced an online therapy service designed for college students called BetterMynd, which students can access for free.

In addition to the suicide awareness bench, Steel’s family also donated funds to the CFK Foundation to establish a scholarship in her memory. The Ainsley Nicole Tibbett Memorial Scholarship supports students with an interest in mental health initiatives and suicide prevention. For more information about supporting scholarships, contact Stephanie Scuderi, Vice President of Advancement Executive Director of the CFK Foundation at foundation@cfk.edu or 305-809-3287.