Bum Farto – The Musical tells a classic Key West story in the most Key-West-way possible – through flashy, robust musical numbers. The legend of Joseph “Bum” Farto is the Keys true crime classic of the ill-fated fire chef, caught up in the 1975 federal drug raid known as Operation Conch. While you may know the the lore of Bum Farto you’ve never seen it told like this.

This is a big show. The costumes are flamboyant in the most wonderful way. They were obviously meticulously selected, fitting each number and moving to become a character of their own. A tap dancing square grouper has a particularly remarkable appearance. The glitter and pizzaz of the clothing does not out shine the dancing which is not only impressive but extraordinarily acrobatic.

The fast tempo music with a chorus of dancers do more than make for an eyeful. The whole production sets the scene of the carefree party world of Key West in the mid-70s. “Bum”, played wonderfully by Tybaldt Ulrich, looms large. His presence on stage is never missed and his influence obvious. But the majority of the tale is told through asides from Special Agent Garry Silva, played by Ronny Dutra, Manny James played by Brad Meccia and Bum’s wife Esther Farto played by Jessica Lamdon. Dutra, Meccia and Lamdon show their talent in spades when it comes to the singing and dancing but they also have moments of softness and relatability when speaking to the audience. The show never stops being fun but especially through these characters we’re let in on some of the real-life sadness left in Farto’s wake.

Another central character which cannot go unmentioned is Brutus, played by Aaron LaVigne. Brutus is a haunting example of a drug user/informant destined for tragedy. The only thing more impressive than LaVigne’s ability to smoothly steer a tricycle on stage is his voice.

And of course these are only a few of the talented group that make this production successful. The on stage musicians and soloists serve as a pseudo greek chorus, adding life to each still moment with their outstanding talent. The cast is large but each member is distinct and highlighted during the show.

It seems obvious that creator and director Pamela Stephenson Connolly meant to create a fun uplifting show, and as you’ll see she was successful. What might be less obvious is that she took care to tell the story of the people involved. On this front I believe she also succeeded.

Though the title might imply this is the tale of one man the show itself actually tells the story of a community at a certain time in its history and evolution. Some may have called it the good ol’ days. I doubt real life was quite as vibrant as the musical and so it is all the more the pleasure to watch.

Next post Lessons from Hurricane Michael being applied to Ian recovery 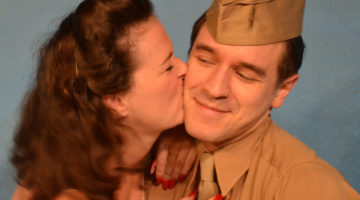