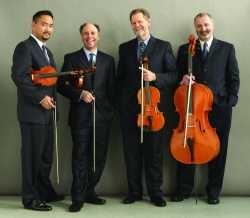 ALEXANDER STRING QUARTET RETURNS TO KEY WEST
“We loved playing for you all last year. It was a very special event.” Fred Lifsitz, violin player with the San Francisco-based Alexander String Quartet, is describing the ensemble’s Impromptu Classical Concert experience during their February, 2014 appearance at Key West’s San Carlos Institute. Good news for Keys audiences: the Quartet is returning in 2015 to perform an all-Beethoven program at St. Paul’s Church on Sunday, February 1st, 4:00 p.m. Their performance is a replacement for the 2015 series first concert scheduled on January 4th which was cancelled due to artist illness.
The instrumentalists – Zakarias Grafilo, violin; Fred Lifsitz, violin; Paul Yarbrough, viola; Sandy Wilson, cello – have been together over thirty years. Formed in New York City in 1981, the Alexander String Quartet captured international attention as the first American quartet to win the London International String Quartet Competition in 1985. The quartet has received honorary degrees from Allegheny College and Saint Lawrence University, and Presidential medals from Baruch College (CUNY). Since 1989, they been Ensemble in Residence at San Francisco State College.
In addition to the Southernmost City, the quartet has appeared at Lincoln Center, the 92nd Street Y, and the Metropolitan Museum in New York City; Jordan Hall in Boston; the Library of Congress and Dumbarton Oaks in Washington; and chamber music societies and universities across the North American continent.  Recent overseas tours have brought them to the U.K., the Czech Republic, the Netherlands, Italy, Germany, Spain, Portugal, Switzerland, France, Greece, the Republic of Georgia, Argentina, Panamá, and the Philippines. They will return to Poland for their debut performances at the Beethoven Easter Festival in 2015.
The Alexander String Quartet are well-known for their mastery of Beethoven’s works. Their 2009 release of the complete Beethoven cycle was described by Music Web International as performances “uncompromising in power, intensity and spiritual depth”, while Strings Magazine described the set as “a landmark journey through the greatest of all quartet cycles.” The all-Beethoven program at St. Paul’s Church on February 1st will be: “String Quartet No. 3 in D major, Op. 18, No. 3”;  “String Quartet No. 12 in E-flat major”; “String Quartet No. 14 in C-sharp minor, Op. 131”.
In Vienna, the young Beethoven worked on the six quartets of his Op. 18 for two years before completing them in 1800. Though published third, the Quartet in D major was actually the first to be written. It is Beethoven’s only string quartet in D major, a key he rarely used in his mature works. When Russian prince Nikolas Galitzin wrote to Beethoven in the fall of 1822 to commission three string quartets, his request fell on sympathetic ears: the composer had been thinking about writing string quartets for some time and promised to have the first done within a month or two.
Other projects intervened, however, and the second quartet on the program — in E-flat major — was not completed until February 1825. The work was a failure at its premiere on March 6, 1825.  Furious, Beethoven quickly had it rehearsed and performed by another quartet. He attended their rehearsals and supervised their interpretation (though deaf, he could follow their performance by watching the movement of their bows). The second performance was a great success, and this quartet was performed publicly at least ten more times in 1825.
Begun at the end of 1825, the Quartet in C-sharp minor was not completed until July 1826. Remarkably, Beethoven had been completely deaf for a decade when he wrote this quartet! Its form alone is remarkable: seven continuous movements lasting a total of 40 minutes. It is no surprise to learn that this was Beethoven’s favorite among his quartets. Impromptu Classical Concerts offers you the opportunity to choose your favorite Beethoven quartet. Join us at St. Paul’s Church on Sunday, 1 February, 4:00 pm for the Alexander String Quartet’s all-Beethoven quartet program.
Concert tickets are $20 at the door one hour before the performance, by calling: 305.745.2283, or online: Keystix.com or classicalconcertskw.com. Season subscription pass (6 concerts) – $100. Subscription passes can be used for all concerts or for multiple guests at one or more concerts. All students free.
[livemarket market_name="KONK Life LiveMarket" limit=3 category=“” show_signup=0 show_more=0]